Before proceeding to the second part of BREASTS, BLOOD AND JUSTICE, I'll discuss some of the prevalent theories as to why the female of the homo sapiens species may have developed both enhanced breasts and buttocks.  I will briefly sum up some current scientific theories but will make no great attempt at attributing every theory to its putative originator.  Also, though I will quote evolutionary theories that presuppose materialistic explanations for all life functions, this does not mean that I subscribe to these presuppositions. It just means that I consider materialistic explanations to be part of the truth.

I draw in part on such references as Leonard Shlain's SEX, TIME AND POWER and the Lynn Margulis/ Dorion Sagan work MYSTERY DANCE. As I read things, the dominant narrative of human evolution with respect to feminine secondary sex-characteristics goes something like this.

(1) The ancestor of "homo sapiens" moves from a quadripedal orientation to a bipedal one, possibly as a reaction to a compromised evolutionary niche.

(2) When females hominids begin walking upright, it has consequences for the width of the birth canal.

(4) Because the human infant remains helpless for several years-- as opposed to many primate infants, who can often survive on their own after a year-- the mother is motivated to attract male protectors who will protect home and hearth.

(5) This cataclysmic situation eventuates in the end of primate-like "estrus cycles" as the female hominid develops the talent and inclination to signal sexual availability at any time of the year. By coincidence alone-- at least according to materialistic science-- the female hominid develops enhanced breasts and buttocks, so that the male cannot predict any particular time when the female will be available for sex. This, according to Shlain, enforced the female's ability to command a "veto power" that exists only sporadically, if at all, in other members of the overall animal kingdom.

(6) A corollary to this line of thinking is that the shift to bipedalism also shifted the dorsal sexual procedure of other primates to a ventral orientation. Desmond Morris famously suggested that female breasts developed as a sexual signal to the male to get with the new program. Sort of a sign reading, "This side up, stupid!"  But it may be fairly pointed out that while engorged-looking buttocks might indeed signal female estrus to males, engorged-looking breasts might have tended to suggest lactation, and therefore female unavailability.

I may have missed a step here or there, having no more than an amateur's cognizance of the basic arguments, but I believe this sums up the prevalent opinions. However, I have encountered one interesting recent contribution that might answer the lactation-taboo objection.

This essay from the online journal LIVESCIENCE addresses a possible reason for the human male's predominant preoccupation with female breasts:

Larry Young, a professor of psychiatry at Emory University who studies the neurological basis of complex social behaviors, thinks human evolution has harnessed an ancient neural circuit that originally evolved to strengthen the mother-infant bond during breast-feeding, and now uses this brain circuitry to strengthen the bond between couples as well. The result? Men, like babies, love breasts.


Recent studies have found that nipple stimulation enhances sexual arousal in the great majority of women, and it activates the same brain areas as vaginal and clitoral stimulation. When a sexual partner touches, massages or nibbles a woman's breasts, Young said, this triggers the release of oxytocin in the woman's brain, just like what happens when a baby nurses. But in this context, the oxytocin focuses the woman's attention on her sexual partner, strengthening her desire to bond with this person.


What does this mean for the traditional narrative of breast/buttock evolution? The narrative assumes that the feminine hominids's alterations take place as a strategy of visual deception, comparable to the display of symptoms of "false estrus" in many other animals. But the release of oxytocin doesn't seem to be a tactic of deception. It certainly begins, as Young posits, as a biological mechanism to promote the "mother-infant bond during breast-feeding." But the traditional narrative doesn't emphasize pair bonding for the sake of mutual enjoyment, much less for the female's enjoyment. The narrative emphasizes "quid pro quo:" the male gets sex with greater frequency-- albeit modified by the female's "veto power"-- and the female gets protection for herself and her offspring.

It's noted in this 2009 online essay that whereas some biologists did not assign oxytocin to play a big role in the sexual stimulation of the human male, some new research suggests that the hormone is more important than was previously believed. If both sexes were initially stimulated by oxytocin through primary sexual contact, then the hormone's stimulation in the female through a secondary sexual characteristic-- that is, through nipple stimulation-- may only have come about as a latter-day elaboration of a separate biological reaction.

All of this signifies that the female breasts of homo sapiens-- and perhaps to a lesser extent, the rounded buttocks-- may have become a displacement for the idea of sexual activity as a whole.  Perhaps traditional cultures that show no great breast-obsession are able to distance themselves from "breast-as-sexual-signifier" because the mammaries principally connote the lactation-taboo under most circumstances. However, this would not mean that the males of those cultures could not still utilize nipple stimulation when real sexual availability was signaled.

And what does this mean for "breasts in fiction?" Obviously, whether one is dealing with a crappy Roger Corman flick or a tony art-film (such as Seth MacFarlane spoofed at the 2013 Oscar Awards), female breasts provide a synecdoche for sexual ecstacy even when no character is actually having sex.  To repeat my verdict from the second of my MacFarlane essays, I find it dishonest to pretend that there are not wholly natural, logical reasons for the use of breasts to sell films or comics or whatever-- reasons that are not intrinsically about marginalizing real-world females.

Not least because real-life females are far from universally agreed about the political consequences of a little jug-music: 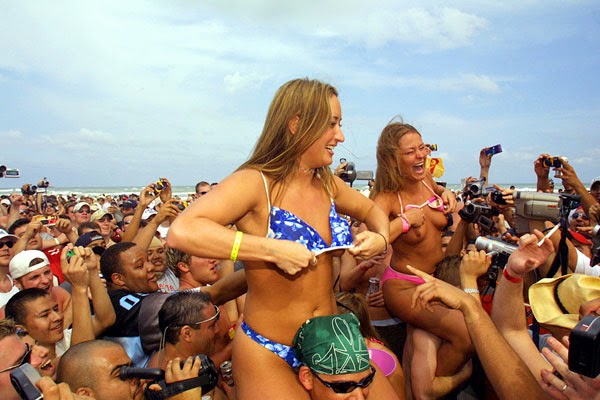 Posted by Gene Phillips at 5:28 PM