My response to Curt Purcell’s recent question-- "What do cute versions of monsters tell us about horror?"-- will be considerably more circuitous than the responses of other horror-bloggers who’ve thus far responded to the question, and who are listed in CP’s original blog-essay. This is perhaps inevitable given my recent ruminations re: Kantian formulations about beauty and the sublime, as seen here and here.

This essay won’t answer the question per se, but will attempt to place the idea of “cuteness” in line with Kantian concepts of “types of liking.”

Kant’s CRITIQUE OF AESTHETIC JUDGMENT gives an excellent logical estimation of beauty but doesn’t provide adequate concrete examples. Edmund Burke, who preceded Kant in formulating a general theory of aesthetics, defines beauty in such terms as “delicacy” and “weakness,” in contrast to the awesomeness of “the sublime.” According to James T. Boulton, even in Burke’s time his detractors found Burke’s criteria too predicated on his personal tastes and not representative of broader notions of “the beautiful,” an opinion with which I concur. I’d venture that Burke may also have been attempting to theorize beauty as the opposite of the sublime in every way, which was too extreme an opposition.

It’s true that beauty is not dominantly associated with the same sort of awe-filled experience one may gain from one’s experience of what Kant calls “the unbounded.” But beauty, the experience of that which is bounded, is often associated with a lesser form of awe, or at least one more associated with “order” than with “chaos.”
However, the qualities Burke assigned to beauty, such as “weakness,” apply quite well to the idea of “cuteness,” as long as one predicates that some forms of this weakness are cognitive while others are affective.

Baby animals possess weakness in the cognitive sense, in that they are helpless either to escape or defend themselves from danger. It’s been speculated that in humans the instinct to protect and care for one’s offspring is at the root of the ability to find nonhuman beings or even objects “cute.” But even if this evo-psych explanation could be decisively validated, the impulse has clearly branched out to include many affects that have nothing to do with infant care.

In affects relating to sexual attractiveness, “weakness” translates into something closer to “that which is appealing,” overlapping with Kantian “agreeability.” For a “cute hat,” the question of weakness doesn’t apply, except in the roundabout sense that its appeal may “weaken” an onlooker to its owner’s charms. If a teenage girl considers a bulky football player “cute,” she certainly doesn’t cognize him as “weak” the way a baby is, but rather that he is, in her mind, both agreeable and approachable. By contrast beauty, as a sexually related affect, connotes “difficulty of approach,” along the lines of Nietzsche’s concept of the Apollonian.

For children, the principle audience for Curt’s “cute critter-creations,” agreeability manifests in terms of empathic bonding. Dolls may be most often used to allow the child to simulate caring for an infant, but they can, as much as other toys, assume other roles: siblings, playmates, parental substitutes, guardian spirits. But it’s important to note that many toys with no “monstrous” associations may represent creatures that are not helpless in nature. Thus a doll that looks like an animal that either is dangerous or is usually perceived so --a lion, a snake-- can as easily become a child’s agreeable companion as a doll based on a creature that looks innocuous. And the process by which a lion or serpent has its less agreeable aspects softened or purged is functionally identical with the process by which Great Cthulhu’s fearsome face-tentacles turn into “bunny ears," as noted in Curt's essay. 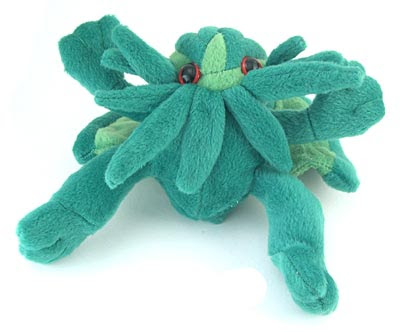 Now, unless a child is not raised knowing that lions are dangerous, the “Soft Lion,” like the “Soft Monster,” is a study in contrast, so it carries a different affect from the more purely agreeable “teddy bear.” And as studies in contrast, they are best understood in tune with Schopenhauer’s concept of “the incongruous,” which I’ll explore further in Part 2.
Posted by Gene Phillips at 4:15 PM