“For the imagination… is very mighty when it creates, as it were, another nature out of the material that actual nature gives it… We may even restructure experience; and though in doing so we continue to follow analogical laws, yet we also follow principles which reside higher up, namely, in reason (and which are just as natural to us as those which the understanding follows in apprehending empirical nature. In this process we feel our freedom from the law of association…”—Kant, CRITIQUE OF JUDGMENT, Section 314, tr. Pluhar).

In Part 2 I stated that Laurence Olivier’s Freud-influenced HAMLET was largely under the sway of Kant’s “reproductive imagination,” in that the film accepted, rather routinely, the Oedipal associations of Sigmund Freud’s interpretation of the Shakespeare play.

Nevertheless, as stated in Part 1, the Oedipus complex is a legitimate archetype, which need not be represented in art as an empirical construction, but can become a vehicle for “productive imagination” when used with the sort of imaginative “free play” Kant recommends.


To prove this, I suggested that I would give an example of the hybridization of productive and reproductive imagination. Shakespeare’s original HAMLET would certainly qualify, for the play certainly contains more archetypes than just the Oedipal one. However, I decided that the best possible counter-example to Olivier's HAMLET should share that film's major attributes, i.e.: (1) that it too was produced some time after Freud’s ideas were popularized, (2) that it made clear use of some Freudian paradigms, and (3) that it adapted a work whose origins predated Freudianism.


My ideal counter-example is the 1931 film DOCTOR JEKYLL AND MISTER HYDE, adapted by director Rouben Mamoulian and his scripters from the 1886 Stevenson novella. To be sure, the Mamoulian film also adapts some story-motifs that were not in Stevenson. A JEKYLL play by Thomas Russell Sullivan was one of the first adaptations to inject a level of sexual conflict not overtly present in the original story, and Mamoulian certainly took advantage of that sexuality for his Freudianized reading. But even here the parallel to the Olivier film seems sound, for Olivier’s film, appearing in 1948, may well have borrowed some of its conceits from earlier Freudianized iterations in film or theater.


As I have not yet reviewed the Mamoulian film on my own site, one can read a detailed summation and analysis on the site CLASSIC HORROR.COM. One of reviewer Eric Miller’s best insights in this review-- and one germane to my Kantian project--is his comment on the Freudian paradigm of “repression”-- a paradigm of questionable applicability to the original story. Because Mamoulian expanded on this typical Freudian concept, Mamoulian’s Doctor Jekyll bears no resemblance to the paradigm of the neurosis-riddled individual that so informed Freud’s view of HAMLET.

Dr. Jekyll and Mr. Hyde’s other main theme is the consequence of repression, making this film much more than your standard “good versus evil” morality tale. Jekyll is portrayed as a curious, open young man. Mamoulian resists the temptation to portray Dr. Jekyll as a hedonistic libertine, instead giving us a decent, honest man wanting to explore perfectly natural and healthy desires. As a forward thinking scientist, Jekyll wants to learn about the world, and is not afraid of what he might find. The representatives of public opinion, however, do not share these views. One by one, we see all of Jekyll’s desires and goals thwarted by “proper” society. 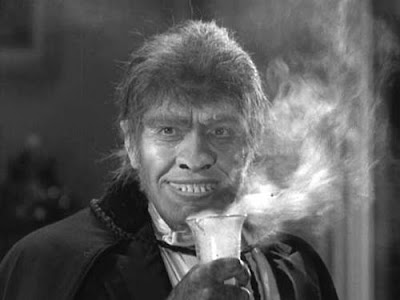 In addition, I'd add that while Freud believed that repression was a necessary evil to maintain society, Mamoulian’s movie is not so resigned. The final images of the film --which show Jekyll looking beatific in death, followed by the sight of a pot boiling over on a stove-- indicate not that repression is necessary, but that it will inevitably create more monsters like Mister Hyde. Mamoulian may not exactly be Herbert Marcuse, but he doesn’t seem to be saying that sexual neurosis must be man’s fate.


But even apart from matters of theme, the more important examples of “free play” in the Mamoulian film are those which embody a new myth for both Jekyll and his alter ego. Mamoulian was not the first to present Hyde as an ape-like creature, but some of his scenarios are as indelible to the modern image of Hyde as anything in Stevenson, much less the best-known silent version, the 1920 John Barrymore version.


Most often praised is the scene where Hyde, in one of his earliest transformations, stands laughing in a downpour. One can, if one likes, read this scene as symbolic of Freud’s “ego.” But it’s an image that goes beyond any simple illustration of a conscious theme. As such it incarnates the kind of “free play” that Kant sees as the result of the “productive imagination.”


Of course, there’s the chance that some forgotten theatrical director was actually the first to use the scenario. I recently read Susan Hitchcock's book, FRANKENSTEIN: A CULTURAL HISTORY, and thus learned that many of the cinematic fates meted out to the Frankenstein monster-- being burned, falling through the Arctic ice-- had actually appeared in earlier theatre-adaptations. Still, even if Mamoulian or his scripters copied their scene from someone else’s, that “someone else” was using his “productive imagination” to conceive “another nature” out of the materials given by “actual nature,” even as Robert Louis Stevenson had.


My principal reason for advancing this somewhat schematic examination of two famous Freud-influenced films is a simple one. I’ve not dealt extensively with Oedipal archetypes on this site, but I’ve always been aware that some creators are more drawn to them than others. One of the most noteworthy—and one that I’ll eventually cover in my “1001 myths” essay-series-- is the Lee-Ditko SPIDER-MAN, which follows some Freudian patterns but (shall we say) “disavows” others. Given that I have frequently disparaged the reductive psychology of Freud and such followers as Frederic Wertham and Gershon Legman, I wish to make clear that I see the patterns Freud identified as enfolded within a larger conceptual structure, one informed by my own particular influences: Jung, Frye, Campbell and Cassirer. My opposition of Olivier and Mamoulian, then, is my way of showing that there are good ways and bad ways to “find Sigmund” in modern works of art.

A few more Sigmundoscopies may be forthcoming...
Posted by Gene Phillips at 2:17 PM

Thanks so very much! I read your article; it was very thoughtful and interesting. Thanks again!