In CHALLENGE OF THE SUPER FOURSOMES PART 3 I said:

There is one mythopoeic element that may have some significance in the story as a whole—an element I’ll treat in a separate essay—but within the origin-sequence, it carries no plurisignative value. 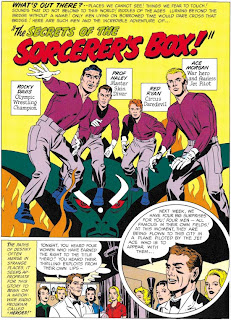 One might be forgiven for thinking that the element I reference is the lead splash-panel, in which the four uniformed heroes are seen against a backdrop of flames and a devilish-looking figure-- who, incidentally, bears no strong resemblance to anyone in the story.

But no, the element to which I refer is the puzzling way that collaborators Jack Kirby and Dave Wood chose to characterize the "Heroes" radio program on which the future Challengers plan to guest.  At a time when female adventurers were rare birds in American media, the radio program chooses to focus not on one, but *four* nameless women who, the announcer claims, "have earned the right to the title 'hero!'"  The women are not named and never appear in the Kirby CHALLENGERS again.  So why four women, rather than, say, a big-game hunter along the lines of Clyde Beatty?

It's at this point I return to my earlier-expressed notion, in CONSUMMATING PASSIONS, of an "inconsummate symbolic discourse."  This is functionally the same as my notion of "presentational incoherence" as expressed in GESTURE AND GESTALT PART 3, but the former term skirts around the necessity of going into Langer's complex definitions of the "presentational" and the "discursive" to explain the terminology.

To this sort of peculiar creative quirk, the default response of the Bloody Comic Book Elitists is usually that if something in the story isn't well done, it can't be important.  Obviously I don't agree, and do agree with Suzanne Langer that such works can possess "diffuse meaning" at the very least.  Four unnamed heroic females are used to introduce four starring heroic males.  If the story as a whole had something to do with the roles of masculinity and femininity, the unnamed females might at least function as a counterpoint to whatever discursive point the author sought to make.

But though one could view the book-length story of SHOWCASE #6 as something of a weighing of the nature of masculinity, the only other appearances of femininity are also inconsummate.

The story in brief: some time after the Challengers have become established as a four-man team of daredevils, they receive an offer to do a job for one million dollars: "a job for men who fear neither devil nor death."  This is interesting wording given the devilish figure in the splash panel, though it too doesn't lead to any plurisignative pay-off.

The Challengers fly to Canada to meet their new employer, a mystic named Morelian.  Morelian wants the four men to be his "guinea pigs" by opening the four chambers of a giant box "constructed in an age long forgotten."  Twice Morelian references the most dominant feminine myth-reference, "Pandora's Box."  Sure enough, each time the heroes open one of the first three chambers of the box, that chamber releases some incredible menace.  Whereas Pandora's Box famously releases various incarnate evils to plague mankind evermore, the sorcerer's box is a grab-bag that releases entities with no obvious connection.  One is a remote-controlled machine.  Another seems to be a living entity, called a "freezing sun." And the last (actually first in presentation) is a big egg which hatches a titanic Greek-looking stone warrior.  This menace, unlike the others, actually gets a second mythological reference, as an inscription on the box calls the egg a "dragon seed," prompting Red Ryan to remember the legend of Cadmus, "the guy who planed a field of seeds and grew a crop of fighting men."  The bulk of the story deals with the heroes finding ways to quell each menace, though the defeat of the giant warrior is the most like a cop-out: after the Challengers see him survive an atomic explosion, they figure out that he's just a mental projection, and they "think" him out of existence.

When the three menaces have all been neutralized, the Challengers get back to the box, only to find that Morelian has opened the box's fourth and last chamber.  Morelian wanted the heroes to deal with the creatures so that by process of elimination he would find the treasure in the last chamber: a ring whose inscription seems to promise immortality.  The Challengers, despite having gone into the deal with their eyes open, scorn Morelian's "selfish reason" for exploring the box, but Morelian simply shrugs and leaves in his private plane.  The plane summarily crashes, destroying the box in its fall, and Morelian dies, leading the heroes to deduce that he misread the inscription: that it was the box containing the ring that promised immortality, not the ring itself.  The Challengers then depart with the observation that "we're still living on borrowed time-- which is more than you can say about Morelian!" 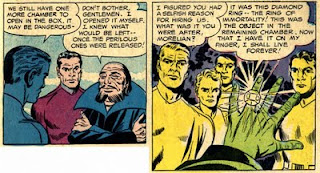 Many later CHALLENGERS stories, by Kirby and others, follow this basic pattern: the heroes find some strange artifact which unleashes various fantastic menaces that they the heroes must then fight or corral.  But this version of Pandora's Box doesn't attain any great mythicity simply by referring to the Greek myth, or even by invoking a few other images with feminine subtext (both the egg that hatches the giant warrior and the mythic "dragon seeds" to which it's compared).  Therefore, because it seems that Kirby was playing around with mythic elements but not really bringing them into any sort of narrative control, the feminine elements-- the four women, the egg (which also appears on the book's cover) and the two Greek myths-- are of an inconsummate nature.  One can imagine an interesting narrative that used them all with greater intensity, but "Secrets" is not such a story.

Similarly, the "villain" of the story, whose name so obviously references "Merlin," is a rather half-assed version of the Faustian over-reacher.  I noted earlier that the story does touch upon the nature of masculinity, and it does, in the sense of evoking pleasure in the heroic acts of the Challengers.  But the story doesn't work well as far as positing Morelian as the obverse of the heroes, simply because he pays them to do a dangerous job.  Is Morelian in some sense "anti-masculine" for having done so?  This is a possibility, but Kirby's story (and Dave Wood's dialogue) offer little to explain why the heroes suddenly take a dislike to Morelian at the end.  An extrinsic reason, not actually alluded to in the text, might be that Morelian's quest to escape death is morally dubious; that opening the box to gain immortality is tantamount to making a deal with the devil.  In Morelian, Kirby presents an inconsummate symbol of Faustian ambition, which is puzzling since it was the sort of story he'd done well in earlier venues, as in his collaborations with Joe Simon for features like SANDMAN and CAPTAIN AMERICA.

None of the Kirby CHALLENGERS stories, whatever their behind-the-scenes origins, ever score very high on the mythicity scale.  That's why it's equally puzzling that he should have experienced such a comparative creative ferment for the early Marvel stories.  But that's another essay.

Posted by Gene Phillips at 6:20 PM