On this blog my first attempt to analyze the problems of Kelly Thompson's unworkable dichotomy, "idealization/sexualization," appeared here:


Though I fully understood why Kelly Thompson opposes idealization and sexualization in her essay, an accurate explanation of the processes of character construction should view sexualization as just one aspect of a more general principle. I call this principle “embodiment,” in that it takes in everything in a given diegesis that establishes the physical nature of a character.-- me, PROOF OF EMBODIMENT.


I followed this up in part by noting in FEMALE OF THE SPECIES PART 1 that Thompson had oversimplistically conflated various types of sexualization, some more extreme (characters wearing thongs or lingerie) than others (characters wearing belly shirts or swimsuit-like costumes).  However, in that essay I didn't attempt to define these differences.  It seems a given that I shouldn't criticize Thompson unless I can define the separate types better than she did, so I tried to come up with a logical breakdown of the differing levels in which characters had been constructed purely in terms of their sexual embodiment.

A quick prelude to my logical breakdown appears in my early essay THAT OBSCURE OBJECTIVIZATION, where I emphasized that "the standardization of sexual attractiveness" should be regarded primarily as a narrative tool:

For most genre-fiction-- particularly those media which, unlike prose, hinge on depicting the appearance of the characters-- the standardization of sexual attractiveness is a useful narrative tool. In romances, for instance, it's almost de rigeur to depict both hero and heroine as meeting a bland standard for attractiveness. This is not because the narrative is trying to convince anyone that homely people don't mate in real life, but because it's advantageous to the narrative's smooth progression to depict only good-looking people becoming romantically entwined. As long as the hero and heroine meet a basic standard of attractiveness, an audience-member is less likely to be thrown out of his/her participation in the story to think, "How can Character A possibly be attracted to Character B?"


So I start from the assumption that even the least spectacular genre-work that makes the heroes and heroines sexually attractive in some way participates in this narrative strategy.  Starting from that point, I deduced three categories, and subsequently selected a particular well-known comics-character, already mentioned in the FEMALE PART 1 essay above, to typify the three phases of sexual embodiment.


First we have GLAMOR: 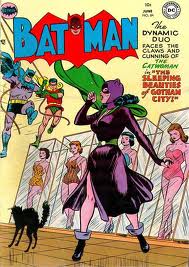 Like most if not all depictions of Catwoman during the Golden Age, the villainess is meant to be appealing to both the hero and whatever readers share the hero's liking for sexy women.  However, the spectacle of Catwoman's femininity does not exceed either the dominant type of plot in Batman/Catwoman stories of the period, nor the dominant type of characterizations.  Catwoman is beautiful but only within proscribed limits, just as Batman is handsome and muscular but only to the extent that this attractive image serves the elements of plot and character.

A greater intensity of sexual depiction can be found in examples of TITILLATION: 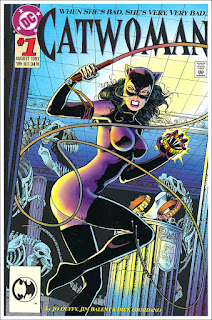 This cover to CATWOMAN #1 by Jim Balent, in keeping with most of the interior art, actually shows less of the character's bare flesh than the Golden Age costume.  Nevertheless, Balent has chosen to give Catwoman a body type that draws attention immediately to the character's secondary sex characteristics.  The story inside may not involve any more actual sexual acts than did the Golden Age stories, but in these stories Catwoman's T&A have become a spectacle that equals or even exceeds the importance of Aristotle's primary elements of plot and character.  This category includes the gendered types of embodiment commonly called "cheesecake" for females and "beefcake" for males.

Finally, we have the neologism PORNIFICATION, handily defined by Wikipedia as "the way that aesthetics that were previously associated with pornography have become part of popular culture, and that mainstream media texts and other cultural practices ‘citing pornographic styles, gestures and aesthetics’ have become more prominent:"

And of course, I could hardly do better than to point to the "New 52" version of the Princess of Plunder: 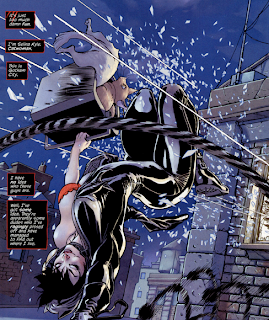 To be sure, not every picture of Catwoman in the past eight issues has depicted her in partial undress.  Such scenes can potentially be found in both the GLAMOR and TITILLATION manifestations.  The emphasis of the PORNIFICATION tendency is that the sexual spectacle should be expected to exceed the importance of plot and character on a regular basis.  This does not necessarily mean that plot or character cease to have any importance. I may be alone in stating that the Judd Winick/Guillem March series delivers in both respects rather ably, though not exceptionally.  CATWOMAN #1 gained considerable notoriety for depicting a vivid if not precisely consummated sexual act between the title-star and Batman, but not every issue has featured such an act.  However, the possibility that such acts may appear again and again allies the Winick Catwoman with the narrative demands of pornographic art-- which is not quite the same as calling the title "pornography," by the way, nor the same as judging it on the same terms one judges literal pornography.

The New 52 (or Parts Thereof) take the Sexual Embodiment Test.
Posted by Gene Phillips at 6:45 PM