Ever since Sigmund Freud asserted the universality of the Oedipus complex, countless analysts and critics have attempted to demonstrate the truth of his thesis by finding the complex in all forms of myth and literature.

Surely the largest single compilation of such readings appears in Otto Rank's mammoth The Incest Theme in Literature and Legend.  Throughout this tome Rank-- who would later split from the Freudian fold-- finds the complex in every literary manifestation of father-son hostility and sibling rivalry.  Many of his arguments are pertinent, though in the end one cannot avoid noting that Rank never finds even so much as an ambivalent example, much less reporting one that does not conform to the Freudian paradigm. 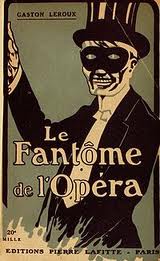 The basic story of THE PHANTOM OF THE OPERA is well known thanks to its many cinematic adaptations.  Within the confines of a Paris opera house (in the 1880s in the novel, though the movies vary the temporal setting), a mysterious madman pretends to be a lurking ghost.  He insinuates himself into the life of a young opera-singer named Christine, using his vast knowledge of music to tutor the girl while planning to make her his.  Christine is also courted by a more presentable suitor, youthful Viscount Raoul de Chagny.  Like the time-setting, Raoul he too seems fairly changeable in film-versions, and sometimes becomes little more than the standard "young man" in the Freudian family romance, where a young man can only possess a young woman by overcoming the threat of an older male competitor.  For Freud and Rank, such a male competitor is always a father-figure in disguise.

Most of the other characters in PHANTOM are inconsequential, but two others are significant though they don't loom large in adaptations.  Though Raoul's father and mother are dead, he has a brother, Phillippe, who is the reigning Count and who has been a paternal influence on Raoul's life.  The fact that Phillippe is a good twenty years older than Raoul suggests strongly that he is indeed a father-substitute, though in the novel that may not mean everything a Freudian might expect.

The other character is known only as "the Persian," who in the novel's last quarter is revealed to be the only friend and confidante of the freakish Opera-Phantom.  He is a sketchy, deus-ex-machina figure, brought in to help Raoul rescue Christine, and to provide needed information on the Phantom.  Like both Raoul and Chrstine, the Phantom-- given the name "Erik" by the Persian-- has no living parents.  However, the Persian-- who meets Erik when the latter peddles his expertise in torture-devices to certain Eastern rulers-- may be seen as being both father and brother to the Phantom, even as Phillippe is to Raoul.

Of course, whereas the Raoul-Phillippe relationship or the Phantom-Persian relationship can and have been dropped in adaptations, no one would be foolish enough to elide the Phantom/Christine/Raoul triangle, which is the essence of the story.  But does the triangle conform in all respects to the Freudian paradigm?

One interesting contrast between the novel and most PHANTOM movies is that in the early chapters, Erik the Phantom-- despite possessing a macabre, skull-like visage-- isn't nearly as retiring in the novel as in the films.  Once he's convinced the majority of the opera house's personnel that he's "the Opera Ghost," thus making it possible for him to lurk around through the structure's hidden passages and near the underground lake, Erik actually exhibits himself openly on various occasions.  Apparently, even though Leroux tells us that he has the skill to disguise himself and pass through Paris as a normal, Erik chooses to spite the opera's personnel by showing off his phenomenal ugliness.  Obviously, most films don't include such episodes, for they would spoil the "big reveal" that has been a standard ever since the original Lon Chaney film in 1925.

Why does Leroux the author have the Phantom show himself so much?  One likely possibility is that he wants readers to consider in early chapters that Erik may be a real ghost-- and not just any ghost, but the ghost of Christine's dead father.  Leroux explores Christine's background in great detail, even to telling us that she and Raoul meet and form their bond when both are still children.  But the most relevant detail is that before Christine's father passes, he tells her that her gift of musical talent will be nurtured by an "Angel of Music."  Presumably the father meant this as a metaphor, but somehow Erik finds about it and manages to use it to convince the naive girl that he is her "Angel of Music," so that she better accepts his ghostly comings and goings.  Raoul first finds out about Christine's strange trysts when he overhears the two of them talking, and hears the Angel of Music pleading with Christine to love him.  He is naturally jealous for most of the novel.

To be sure, Rank might have made something of a curious circumstance toward the end of the novel: due to the havoc Erik unleashes with his bizarre mechanical devices, both he and Phillippe perish about the same time.  I can imagine Rank declaring that, because both had aspects of "the Father" to them, their mutual deaths clear the way for Raoul's unchallenged access to Christine.  There's even a little support in that Leroux reports that Paris gossip circulates a story that Christine was "the victim of a rivalry between the two brothers," which certainly suggests a scenario in which Raoul killed his sibling in the standard fight over a woman.  Yet though these details aren't without interest, they are eclipsed by the facts that Phillippe shows no interest whatever in Christine, any more than Christine does in her supernal teacher.

What this suggests to me is that PHANTOM's psychological matrix is as responsive to the dynamics of the "family romance" as any of the works Freud and Rank considered to be heralds of the paradigm-- but that Leroux did not eroticize the dynamics as Freud and Rank would think he ought to, based on the universality of said complex.  I deem PHANTOM a work of "reproductive imagination" based on the way it recapitulates the 'empirical" relationships of family life, but it doesn't "reproduce" the Freudian paradigm, even though some subsequent movie-treatments have.  That's one reason that I've termed the Oedipus complex to be just one "archetype" among many, as opposed to being an all-encompassing determinative factor.

As I plan to review some of the film-adaptations on my film-blog, I'll foreground those reviews here by noting that Leroux's novel falls into the category of "the uncanny" with respect to four of my designated tropes: "outre outfits skills and devices," "freakish flesh," "bizarre crimes," and "phantasmal figurations."  The novel also includes a strange figure who may be a real "Opera Ghost," encountered late in the novel by Raoul and the Persian.  Leroux maintained till the end of his life that there had been a real ghost in the real opera-house, but in terms of the actual narrative, he doesn't allow an actual "marvelous" element to intrude upon his "uncanny" setting, and so I can't regard this particular spectre as having any reality in the sphere of the PHANTOM narrative.

Posted by Gene Phillips at 6:02 PM