MONSTERS, DEMIHEROES, AND OTHER WILLING BEASTS

In this essay I said:

A little later "instinctual" took the place of "intuitive," but I don't think I adequately explained that these representations are not inherent in the hearts and minds of the characters themselves, which is a mistake I find in the opinions of other genre-sussers cited in that essay, such as Jeff Rovin and S.C. Butler.  Rather, these Schopenhaurean representations are narrative patterns imposed upon those characters by their respective authors, irrespective of how "intellectual" or "instinctive" the characters themselves may be.

In this essay I defined Vincent Price’s character Dr. Craven as a demihero, saying that he was defined by "instinctive will."  This doesn't mean that instinct alone rules the character; rather, it rules the pattern of his narrative.  Craven is certainly more intellectual than many of the characters that qualify as heroes.  Craven is governed by “instinctive will” because even though he makes a heroic effort to oppose the villain of the story, he doesn’t become a hero.  He remains defined by his own personal goals alone, without any hint of a transcending altruism.

I’ve defined the persona of the “monster” as the generally negative counterpart of the demihero.  Usually the monster is also defined principally by self-preservation, whether the creature is destructive on a large scale (Godzilla) or covets some forbidden prize (King Kong).  Self-preservation and endurance also typify even benign monsters, like Man-Thing, of whom I said in D IS FOR DEMIHERO PT 3:

A comics-series like MAN-THING portrays its monstrous protagonist doing good not as a conscious act but in response to instinctive tendencies.

And yet there are monsters who do good as a conscious act.  A prominent example is the Incredible Hulk.  In Peter Coogan’s 2006 SUPERHERO: THE SECRET ORIGIN OF A GENRE—referenced here—he denies that Buffy the Vampire Slayer can be a superhero due to his method of “genre exclusion.”  Yet he doesn’t disallow the Incredible Hulk from superherodom despite that character’s clear alliances to the horror-genre.  And he’s correct in the latter instance.  The Hulk, though a character with no more than a brutish intelligence, exemplifies the same “intellectual will” in his narrative function, in that his authors emphasize that he makes conscious choices to battle evil.  While there are various stories in which the Hulk himself proves an unwitting menace to humanity, it’s far more typical to see him engaged in combat with outright villain-antagonists. The Hulk even has a "rogues' gallery," which is atypical for the majority of monsters of purely kenotic orientation. 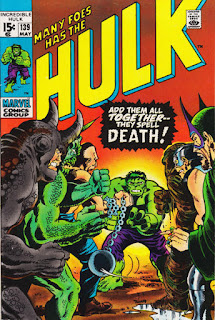 The greatest exception are those serials in which a monster is drafted to become a hero in terms of plot-function, even though the monster retains the kenotic *character* of a monster.
Some examples include the 1966 KING KONG kid-cartoon: 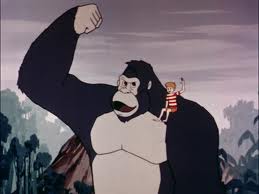 Not to be outdone, several of Japan's Godzilla films from Toho Studios also cast the Big G in the unlikely role of Earth's protector.  In GODZILLA VS. MEGALON the Zillinator even allies himself with Jet Jaguar, one of the many progeny of UltraMan, in the battle to save Earth. 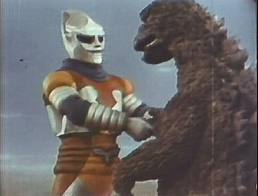 Toho's competitor Daiei Studios went even further in "super-heroizing" their monster Gamera.  After just one film in which the giant super-turtle proved a menace to mankind, every other film cast him as a heroic monster who acquired a "rogues' gallery" of mostly one-shot menaces.  A later revival even gave Gamera a backstory to explain why he was so darn beneficial. 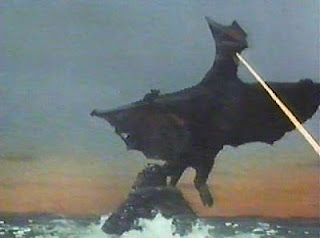 Hanna-Barbera revisited the "hero-monster" idea in the 1978 GODZILLA TV-cartoon.  To be sure, though every episode Godzilla had to pit his reptillian righteousness against the Monster of the Week, at least the writers kept the sense that Godzilla was a big irritable beastie rather than a crusading hero.  He only protected the show's human regulars inadvertently, because his son "Godzooky" hung out with these mediocrities and the Big G had to put the welfare of his family above any possible preferences to fry the humans like so many ants beneath a magnifying glass. 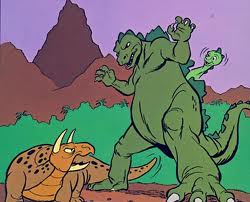 So are of these permutations of respectable monster-personas "heroes?"  Only if one prioritizes the *dynamis* of plot over the *dynamis* of character.  I first established the separability of plot-dynamis from character-dynamis in KNOWING THE DYNAMIS FROM THE DYNAMIC, but my fullest examination as to this sort of division appeared in RISING AND FALLING STARS.  Examples here focused purely on the opposition of the "adventure mythos" to the "drama mythos," so that:

STAR WARS serves as an unreserved example of the "pure adventure," in which both plot and characters evoke the dynamis of adventure.

...in STARGATE the mythos of drama pervades the plotting of the series, overshadowing characters who would otherwise fit adventure-archetypes.

Another negative example, but one in which the mythos of drama dominates the characters rather than the plot, would be the 1978-80 versions of BATTLESTAR: GALACTICA. The plot, in which noble humans repeatedly faced the menace of Cylon invaders, clearly takes inspiration from STAR WARS, but the characters lack the *dynamis* of the adventure-mythos, tending toward drama in its manifestation of "melodrama."

DC Comics' STARMAN, in most of the iterations of the franchise, has usually been a "pure adventure." However, the Starman introduced by James Robinson, whose continuing series ran from 1994-2001, exemplifies the type in which the plot is the main source of the adventure-dynamis.

My final example must be one in which characters with the adventure-*dynamis* override a plot with a dramatic emphasis. My choice here is the 1978 American STAR BLAZERS, adapted from the Japanese anime TV-series SPACE BATTLESHIP YAMATO (which I have not seen in its original form).

I didn't give an example in which both plot-dynamis and character-dynamis were both aligned to the drama.  But in other essays I have mentioned Classic STAR TREK as one such, so I include it to fill in that space for symmetry's sake.

I mention all these mythoi-examples because I propose the same ambivalence applies to the narrative "persona-patterns."  King Kong, Gamera and Godzilla may follow the plots of heroes in these assorted works, but I assert that in terms of fundamental character they still represent "instinctive will," while the not much more intelligent Hulk represents "intellectual will."  So the Hulk does make that hypothetical "wiki-list of all superhero works that fall into the adventure mythos," mentioned in RISING, while the three big honking monsters cited would still fit the persona of the "monster" rather than that of the "hero."

Posted by Gene Phillips at 4:36 PM