Once again the spectre of sexual objectification rises up to disturb the innocent souls of Hollywood. It's been a week since Seth MacFarlane hosted the Oscars with these partial lyrics to "the Boob Song."

On this BEAT post, entitled "Why Seth MacFarlane Is Not a Great Satirist," Heidi found the lyrics somewhat less than politically correct, saying:


Let’s take the most obvious example: “We Saw Your Boobs.” The set up is William Shatner as Captain Kirk slingshotting back in time to warn MacFarlane not to do the horrible tasteless things he’s about to do and thus earn the label of worst Oscar host ever. To show what’s about to happen. Shatner cuts to a video of MacFarlane singing a song called “We Saw Your Boobs” where he names actresses and the films in which they appeared sans shirt.

Now, if the object of the humor was actually MacFarlane and his penchant for ribald attack humor, a simple 15-second cutaway—much like those on Family Guy—would have gotten across the point…and the humor. But no, it goes on for nearly two minutes—the point is to name and shame, say the word boobs and turn actresses into dehumanized objects yet again. I have a dream that someday women will be judged by the content of their character and not the content of their Maidenforms, but that day has not come for MacFarlane. In his world, if you’re a woman and doggedly track down the worst terrorist the world has ever known, you’re not a hero—you’re just another woman who’s mad at being stood up on a date.


I have no idea where Heidi gets the "mad at being stood up on a date" thing from; it's not in MacFarlane's song and doesn't seem to reference any of the movies MacFarlane names. I assume the "terrorist" remark refers back to 2012 Oscar nominee ZERO DARK THIRTY.

Heidi's initial definition of "satire" is pretty close to my own, in that I think real satire includes some moral element.  Heidi says:

Satire is meant to take one thing and examine it through a humorous lens, usually in a critical way.

However, I certainly would not agree that it can or should only be directed at the people Heidi thinks should be critiqued:

Now of course, there is often pop culture satire on Family Guy, but the humor is as much aimed at the helpless as at targets that need to be taken down a peg. It’s the mocking humor of the powerful, not social critique.

I wonder what Heidi would make of this typical scathing shot which Al Capp of LI'L ABNER fame took at the counterculture of his time. 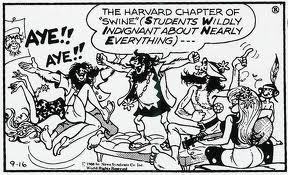 Now, Capp may have regarded hippies as "targets that needed to be taken down a peg" if he genuinely did not like their worldview.  Does the fact that hippies were marginal in terms of real-world power mean that it's not satire when he attacks them, but that it is satire when Capp attacks General Bullmoose, he of the famed motto, "What's good for General Bullmoose is good for the country?"

Though I agree with Heidi that some moral criticism is intrinsic to satire, the example of Capp indicates that satire's mode of criticism has nothing to do with whether the targets do or do not wield power in society.


All that said, I also disagreed with those who defended the Boob Song in terms of its being satire, whether of MacFarlane's image or Hollywood art movies, or whatever.  I also disagree with Heidi deeming MacFarlane as "not a great satirist" because I don't deem him to fite that category.  I said on the thread:

MacFarlane’s not a satirist at all. He’s a farceur; he makes his daily bread poking at any and all sensitive areas (unlike the SOUTH PARK posers).The object of his humor in the “boobs” skit was to point out that Oscar can nominate all the high-falutin’ flicks, can ignore pretty much every good comedy every made– and hetero guys will still primarily remember which hot chick showed her tatas in which flick.

Having said that, though, I decided to search the web to see whether or not Seth MacFarlane had ever *claimed* to be a satirist.  I did find an offical response from him that made such a claim, in response to a protest over one of those jabs at "the helpless," Down Syndrome victims, with an additional jab at a "powerful" figure, Sarah Palin, in the FAMILY GUY episode "Extra Large Medium."

The Times asked "Family Guy" creator Seth MacFarlane for an interview regarding the matter. But he opted to send a statement via his publicist: "From its inception, 'Family Guy' has used biting satire as the foundation of its humor. The show is an "equal-opportunity offender."-- SHOW TRACKER.


Nevertheless, even now that I know that MacFarlane has on one occasion defined himself as a satirist, that doesn't alter my view.  FAMILY GUY may produce a "feminist episode" in which Peter Griffin's normal male chauvinism is replaced by a New Age feminine sensitivity.  But meaningful change is anathema to the broad farce of the show, and so Peter's newfound sensitivity vanishes in the face of a riotous appeal to male fetishism: a catfight between Peter's female boss and his wife Lois.

Now, even if I say that a comic routine is not meant to make a serious moral criticism, that isn't the same as divesting the routine of all meaning.  I won't dwell on the distinction here, but will only note that I examined the matter of non-moral meaning somewhat more in A MORAL FIXATION.

Next up: having disposed of Seth and satire, that other thing-- I forget its name-- will appear in Part 2.
Posted by Gene Phillips at 4:26 PM