MAGGIE: "We are the masters of our own dreams and fantasies..."

PENNY: "Maggie's right. There is no such thing as the dream police. So you can think all the dirty, sick, evil thoughts you desire..."

HOPEY: "Acting on them is another aminal." 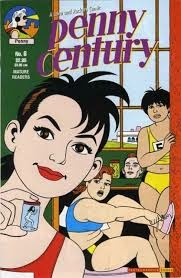 On 4/15/14, Heidi MacDonald posted a closed-to-comments essay on THE BEAT entitled, "What is it like to be a man in comics?"  The essay responded to the experiences of Janelle Asselin, who critiqued the cover art of the forthcoming TEEN TITANS #1, and who also received assorted rape-threats in response to her observations. In part 1 of my response I noted that Asselin made her points "cogently enough," though I disagreed with some of them. Though Asselin didn't address only matters pertaining to genderization, there's no question that she gives special attention to the representation of the female character Wonder Girl:

Let's start with the elephant in the room: Wonder Girl's rack. Perhaps I'm alone in having an issue with an underaged teen girl being drawn with breasts the size of her head (seriously, line that stuff up, each breast is the same size as her face) popping out of her top. Anatomy-wise, there are other issues -- her thigh is bigger around than her waist, for one -- but let's be real. The worst part of this image, by far, are her breasts. The problem is not that she's a teen girl with large breasts, because those certainly exist. The main problem is that this is not the natural chest of a large-breasted woman. Those are implants. On a teenaged superheroine. Natural breasts don't have that round shape (sorry, boys).


Asselin's deprecatory take on artist Rocafort's depiction of breasts resulted in the huge quantity of comments on her thread, getting close to 600 as I post this; it's plain even from a perfunctory look at those comments that next to no respondents cared about Asselin's observations about anything else about the cover.

Now, Asselin's comments about male breast-fantasies in comics are pretty much of a piece with hundreds of others before her column, so I have no clue as to why anyone would react so vehemently to them, as Heidi MacDonald details:


This is MEN’S PROBLEM. I know most internet trolls are teenaged boys who don’t know any better, but this is MAN’S THING. This is something you men need to figure out and condemn and deal with. There should be MAN RULES about it, like how you’re not supposed to go into the urinal next to another guy, that kind of thing. Belittling, embarrassing, threatening and shaming women should not be some kind of masculine rite of passage. It should be the opposite of being a real man.


There's a partial truth in this, but keep in mind what MacDonald says a few paragraphs down:


In closing, I would like to salute the bravery and professionalism of Janelle Asselin. She put her opinions out there knowing what kind of response she would get and she still did it, in hopes of perhaps getting people to think and to shed light on matters that are not discussed enough. Just because these things are hidden does not mean that men do not have this problem.

I don't doubt that Janelle Asselin called things like she saw them. Yet the phrase "knowing what kind of response she would get" sticks in my mind.  I don't entirely concur with MacDonald's picture of Asselin as a selfless crusader, precisely because the paragraph I reprint above is set up to "poke the bear" as much as possible. Worse, it takes the position that fidelity to the real proportions of the human body is the only possible good in comic-book art, and that deviations from said proportions are ipso facto bad art.

I don't condone, any more than I understand, why even ignorant teenaged boys would use Asselin's comments-- which to me are nothing new-- as a excuse to attempt shaming a female writer. I also freely admit that this probably happens more when males object to writings attributed to females, though I have seen-- and experienced-- some instances in which male posters attempt to degrade their fellow males in terms of sexual references.

However, MacDonald's comment about "what it's like to be a man" seems rather self-serving, especially from the essayist who penned these golden words in 1-31-08, and cited here:


The question is how much the artwork resembles Superheroines Demise. Because if it looks like that, there may be some kind of ulterior motive....So next time you claim your interest in superheroes is completely innocent and devoid of fetishistic aspects, well…you’re going to have to PROVE it!


In my opinion, MacDonald takes a pretty long step to get from "dumb teenagers taking advantage of the Internet's anonymity" to a "masculine rite of passage."  Freud famously observed that men often told degrading jokes about women in all-male groups, but some studies suggest that this trait appears in both genders:


Mitchell's research and similar studies clearly show that men and women both know and appreciate jokes of an aggressive or sexual nature... but their jokes do not serve the same psychological or interpersonal functions.


Though the rape-threats printed by Asselin aren't jokes as such, I think it likely that if any of the threat-makers were called to account for those threats, those posters would probably justify their remarks as a nasty species of humor. I strongly doubt that any of them would defend their statements based on the right of men to rape women, whether as a right of passage or for any other reason. The exception to this generalization would in my opinion be anyone who had actually committed rape, which does invoke the sort of elaborate explanation MacDonald claims.

Let me return to the quote with which I opened this essay. It's a quote with which I agree; that stories in all media should be allowed, in the right circumstances, to indulge in "evil thoughts," be they stupid rape-jokes or Superheroines Demise.  In a curious reversal, though, Fantagraphics, the company that published PENNY CENTURY has never advocated overall freedom from the "dream police." The editors and writers of THE COMICS JOURNAL only advocated that freedom for an elite cadre of "quality authors," while all others were condemned as seducers of the innocent. 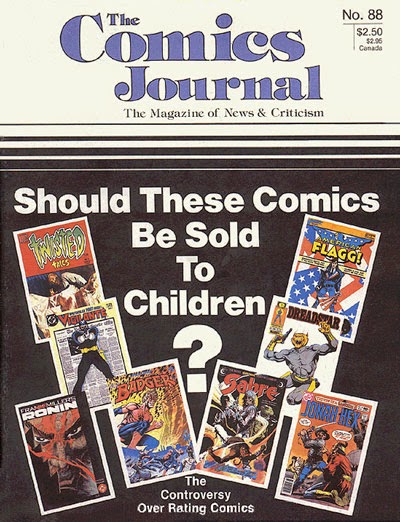 Janelle Asselin's complaints about "an underaged teen girl being drawn with breasts the size of her head" may be entirely sincere, but they are also in the JOURNAL's tradition of bear-poking. Unlike MacDonald, I don't think Asselin's comments "shed light on matters that are not discussed enough;" I think they're no more than preaching to the choir, though a bit more cogently than some of the critics I've assailed here.  No one but the members of that choir are going to care about Asselin's carping at unnatural breasts on a teenaged girl, and the result, as seen in the comments-thread, is a farrago of sniping and two-bit comments. Of the comments I read, many evinced a familiarity with the topic, so Asselin's original essay brings no fresh insights to the matter. It's just the same old song, and I don't think the tune would have been any different if Rochafort had been a more exacting artist.

The "evil thought" of picturing females with breasts bigger than their heads may well be a male thing that women will never get. But one answer to MacDonald's question about "what it's like to be a man in comics" might be not taking seriously the comments of those who make much of such petty evils. Dumbasses who make rape-threats, even those with no teeth in them, are, as MacDonald says, "fucked up." But the freedom to indulge in fantasies, even stupid ones, is a freedom that all men and all women deserve, in comics or in any other bailiwick.

Posted by Gene Phillips at 5:34 PM