For this first entry in my new series of “mythcomics,” I select an example of what I term “clansgression.” Readers of this blog may recall that this formulation takes in not only the phenomenon of literal incest, but all the sociocultural associations that have arrayed themselves around the phenomenon. 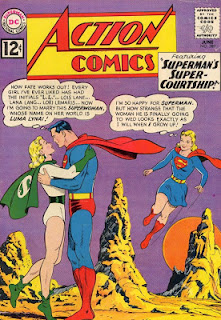 The story “Superman’s Super-Courtship” appeared in the June 1962 issue of ACTION COMICS, issue 289, by Siegel and Mooney, and edited by Mort Weisinger. This story was one of many during Weisinger’s tenure in which characters in the “Superman universe” sought to manipulate romantic alliances, either to the benefit of themselves or of some other person. “Courtship” wasn’t even the first time Supergirl attempted to play matchmaker for her older cousin Superman, but the story has garnered a little more Net-attention for its psychological content, as one can see here. The dominant reading for this story has been to focus on one panel seen herein, arguing that it provides what is currently called *squick * via the thirty-something Superman’s profession of lust for his teenaged cousin.


I won’t entirely disavow this interpretation. The story was written, drawn, and edited by men, and Mort Weisinger in particular isn’t known as a great bastion of feminist sensitivity. Nevetheless, “Courtship” is a Supergirl story, ostensibly aimed at juvenile girl readers, so the conscious intent of the story’s raconteurs was to play to the egos of girls, as the raconteurs perceived them. Thus the story might be better titled “Supergirl’s Super-Courtship,” since her decision to play matchmaker for her cousin is one that reinforces her own ego, more than doing anything for Superman.


Supergirl, in her secret ID as Linda Lee, sees a sad romantic film that makes her decide that since the Man of Steel can’t make up his mind about either Lois Lane or Lana Lang, he must need a new inamorata, one chosen by the Girl of Steel. Superman seems curiously compliant as he cooperates with her shenanigans, rather than undermining her efforts to “teach her a lesson;” this might serve as more evidence that the creators’ primary motivation was to validate Supergirl’s ego.


Supergirl tries three times to set up her cousin, and the first two matchmaking sessions are played for comedy. Even though Supergirl thinks to herself that her cousin doesn’t think one can change the past through time-travel—a repeated “rule” in the Superman-universe—the superheroine tries to do just that, after reasoning that her noble cousin deserves the most beautiful woman ever—none other than Helen of Troy. Technically, it’s Helen before she was either stolen by Trojans or married to the Greek king Menelaus; Supergirl arranges to have her cousin show up while dozens of suitors are courting Helen. Not only are no sparks struck from Superman’s meeting with Helen, the Greek princess gets royally pissed off at the super-duo’s intrusion. Helen is particularly miffed that Supergirl’s talents put Helen in the shade—which, psychologically speaking, is where a quasi-mother figure like Helen of Troy belongs. 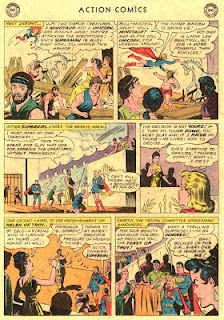 Supergirl’s second attempt is firmly rooted in the Superman cosmos, drawing upon the superhero-team the Legionnaires, a group of teens dwelling in Earth’s 30th century. Supergirl takes it into her head that one of the superheroines in this group might be a match for Superman—though not as a teen heroine, of course. Supergirl draws her compliant cousin to a party in an era when where some if not all Legionnaires have grown to adulthood. Yet, while Supergirl researches Helen’s social matrix to get the lay of the princess’ land, the Girl of Steel doesn’t bother to find out first whether or not her second choice—Saturn Woman, known as Saturn Girl in her teen incarnation-- is married or not. This incident may have been a shout-out to Legion readers, who would have known that the character of Saturn Girl had a regular beau—to whom she would inevitably be married in adult life, given the expectations of the reading-audience. 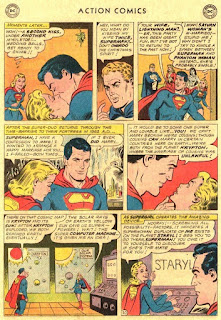 When the two Kryptonians return to their own era, it’s then that Supergirl confesses her matchmaking scheme to her cousin. Throughout most of the story the reader isn’t privy to Superman’s thoughts; he’s only defended his intention not to marry as one of being dedicated to his superhero career. At this point he soothes his cousin’s bruised ego by telling her that he would only marry “someone super and lovable like… you!!” The “super” part of the equation refers back to a frequent trope in other stories: that Superman will not marry an un-super woman since she might be killed by his enemies. The “lovable” part of the equation might express some latent sexual feelings on his part. Altternately, it meant mean that he’s figured out that she’s playing Cupid to exorcise her own libidinous demons, and that he’s letting her down easily, with a not entirely germane discussion about how Kryptonian cousins cannot intermarry. In an extrinsic sense, editor Weisinger may have wanted this speech included, if he had received fannish suggestions about seeing the super-cousins married—though this is only speculation.


However, Superman’s attempt to end the conversation spurs Supergirl to new heights: since he’s said he would marry someone like her, she uses his “super computer machine” to find that there exists another superwoman—identical to Supergirl except for being an adult—on the planet Staryl.

Superman again complies with his cousin’s request; he seeks out Staryl and makes the acquaintance of superwoman Luma Lynai. In one of the hero’s very few thought-balloons, he thinks, “Can I find a girl [on Staryl] as wonderful as Supergirl?”—indicating at the very least that he isn’t blind to his cousin’s attractiveness, teenager or not. Sure enough, in the space of one panel Superman meets and woos Luma Lynai (who wears a costume not unlike Supergirl’s, though Luma chooses hot pants rather than a skirt). Superman invites Luma to visit Earth so that they can be wed if she likes it there—a whirlwind courtship, indeed! But Earth’s yellow sun strips Luma of her super-powers, which was the main thing that pulled her ahead in the race against Lois and Lana. As Luma tearfully returns to her own world, Superman seems only mildly disappointed at his loss of possible connubial bliss. For Supergirl’s part, she’s also tearful for having meddled in her cousin’s love-life. At the story’s close, she’s momentarily tempted to try the matchmaker game once more, but ends the story with the firm resolve not to do so. Yet arguably her adventure served its ego-boosting purpose: without indulging in literal incest, Supergirl “makes love” (in the juvenile sense) to her cousin through an adult doppelganger, and shows that, except for that pesky Kryptonian law, she might have been the best match of them all.
Posted by Gene Phillips at 5:04 PM