For a null-mythic version of the Joker, I strongly considered the 2012 storyline "Death in the Family," which extended over an arc of 23 parts, spread out over several DC features. I did read the TPB that concluded the series. In this story, apparently the conception of Scott Snyder, the Joker has watched the TEXAS CHAINSAW MASSACRE a few too many times., since he's started wearing his own flayed face-flesh as if he were the love-child of Leatherface and Jame Gumm. 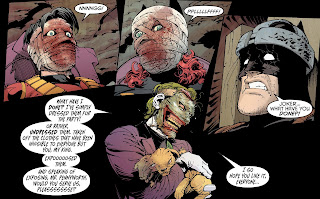 At length I decided that (a) it wouldn't be fair to review just one section of this involved arc, and (b) I didn't have any burning desire to read the rest. I will note that I can understand why Snyder and his DC co-workers might have wanted to "re-estrange" the Joker with this grotesque makeover, given that the familiarity of the Joker's iconic visage may have bred a certain degree of audience-contempt. Reputedly the series sold well, so in one sense there's no arguing with success. Nevertheless, I'd venture that Snyder et al seem to guilty of mixing their monstrous metaphors. The Joker, insane though he is, isn't insane in the same fictionalized way as Leatherface and Jame Gumm. They wear skin-masks to efface their real, overly fragile identities. But why would the Joker resort to such a device? Everything that makes the Joker one of the medium's most popular villains suggests that he's loved because he's become a living archetype. In the comics, at least, the Joker has totally subsumed whoever he was before his transformation--

Except in the world of Alan Moore.

I wrote this essay, THE KILLING BLOKE, some four years ago. I wasn't using the "null-myth" terminology then, but the Moore-Bolland "Killing Joke" story seemed perfect as an illustration of what I called (after Philip Wheelwright) "monosignative" rather than "plurisignative."  I hadn't then elaborated the four potentialities, but now I'd view what I wrote then as an anticipation of that doctrine. KILLING JOKE is, in essence, a story in which writer Alan Moore and artist Brian Bolland decided to tell the story of the Joker's lost humanity. 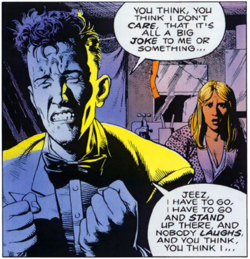 I wrote, in part:

There's no question that Alan Moore was aware of the symbolic status that Batman and the Joker had assumed over the years. To be sure, though, Moore's Batman gets short shrift in that department, coming off most of the time like a weary costumed cop, the "straight man" of the comic duo, saying things like, "How can two people hate so much without knowing each other?" In contrast, the Joker gets so many good lines describing how he embraces a world of inescapeable nihilism that Moore might've done better to title the work "Sympathy for the Joker." Moore's own expression of sympathy for the philosophy of nihilism, then, results in a work that demonstrates what happens when, as noted above, the explanation of the myth becomes what the myth "means." Frye defines allegory as "forced metaphor," and in many respects the two opponents have been forced into metaphorical roles that do more to spell out Alan Moore's philosophical views than to emulate the free play of myth.

"It's all a joke!" declares the villain, trying to lure Batman over to the dark side, "Everything anybody ever valued or struggled for... it's all a monstrous, demented gag! So why can't you see the funny side? Why aren't you laughing?" The Joker gets much better lines than Batman, but I'm not sure his myth is any better served than Batman's by being bound in a philosophical strait-jacket. Moore's revisionist origin for the Joker posits that he was once just an ordinary schlump, a would-be stand-up comedian, who lost everything in a manner analogous to the way his bat-garbed enemy did. This take on the Joker's history didn't become accepted canon for the various ongoing Bat-serials, and it's not hard to see why: the origin gives the Joker a humanity that's at odds with his more traditional blackhat-villainy. In fairness Moore crafts his story so as to apply that the Joker's memory of his "origin" may not be true in all details, so Moore gets points for realizing that others might not care to follow his lead in playing with DC Comics' "toys."


Reviewing these remarks once more, I would even follow up my "straight man" remark to say that Batman and the Joker, instead of fulfilling their roles as archetypal crimefighter and criminal, have become something like a jaundiced pair of performers, sort of a superheroic version of the "Sunshine Boys." 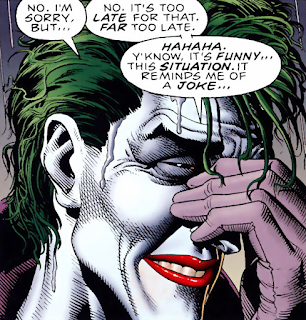 Aside from the story's purely fortuitious effect on the career of Barbara "Batgirl" Gordon, the story has none of the deeper symbolism of which Moore is capable. Here we have an excellent master of his writing-craft indulging in an exercise, that of trying to graft realistic personalities onto fantasy-figures. It's a credit to Moore's dramaturgic talents that JOKE can still be read on that level. Certainly it's superior to DEATH IN THE FAMILY in that regard.

Returning to the subject of Batgirl-- 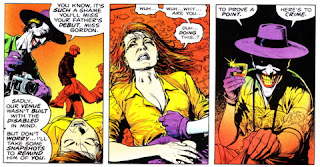 Within the world of comics-fans, this may be the best-known scene in which Moore depicted a well-known female icon not of his own creation-- and given that he once wrote an essay complaining about the marginalization of superheroines in commercial comics, it's a delicious irony that it's a "Women in Refrigerators" scene all the way. I don't have quite the same knee-jerk animus toward such scenes as do others in the fan-community, but last year I was greatly amused to see that Liberal Moore found himself being pilloried for Writing Rapey Comics, mostly by Ultraliberals whose solution to the problem of evil is to avoid depicting it.

In a subsequent interview, Moore said that he didn't expect the crippling of Barbara Gordon to last: he was sure she'd get magically healed by one of the many DC miracle-devices. Kim Yale and John Ostrander are generally credited with realizing that the tossed-off mutilation of a long-time DC heroine-- albeit one at a rather low ebb of popularity in 1988-- could serve as a means of exploring the dramatic consequences of a differently abled superheroine. I wouldn't say that "Wheelchair Batgirl" was precisely much more mythic than her predecessor. I enjoyed those stories-- particularly those of Gail Simone-- on a purely dramatic level. But the fact that Original Batgirl finally did come back may say something about the sovereign function of fantasy within the context of fiction that has always been "play for play's sake."

Ironically, though Alan Moore's tune throughout KILLING JOKE starts out as "Sympathy for the Devil," he says very little of importance about the Joker-- and instead supplies a leitmotif through which other raconteurs could compose their own version of "the Batgirl Song."

Whose baby is she, indeed?

Posted by Gene Phillips at 5:00 PM