"STOP IT, YOU'RE JUST ENCOURAGING HIM!"

Yeah, once again I tossed out a quick, snide jibe at an essay to which THE BEAT linked here: an essay in which the author claimed that Robin was a "queering influence" upon the Batman mythos. After my jibe, one reader differed with my opinion. I imagine that Heidi probably wanted to say to him-- well, what I say in the title. I responded, in keeping with my general distinction between the natures of fiction and non-fiction, I wrote:

Fictional comics about "toxic masculinity" can be directed at specific audiences because fiction does not (or should not) have to meet tests as to real-world applicability.

Non-fictional articles may indeed be written to target audiences, but in theory they ought to meet the test as to real-world applicability.


Now, from the little bit I had read of the essay, it had nothing directly to do with the contrasts of fiction and non-fiction. But now I've obligated myself to critique this newest (yawn) queeritude quitique of Robin the Boy Wonder. Here, lemme read it while I do my daily Sudoku...

OK, let's go down the list of the sins of "Dick Grayson vs. Toxic Masculinity:"

Author Jess Plummer foregrounds his thoughts on Dick Grayson's oppositional status by focusing on a forthcoming, out-of-continuity miniseries in which Nightwing Will Kill the DC Universe, more or less. Plummer correctly tags this as a likely borrowing of the current "Hydra Captain America" schtick, but then decides that the choice of Dick Grayson signifies that "Dick Grayson makes straight men nervous." This is because, from the conception of the original Robin, the youth has functioned as "a damsel in distress" to his mentor Batman.

Frederic Wertham is then credited with having "picked up on" this startling truth, and with having popularized the "queering influence" of Robin on the Batman mythos. (Plummer cleverly inserts a comic-strip excerpt in which Robin is forced to dress in a frilly Louis XIV-looking gown, as if this sort of thing happened all the time in Batman comics.) Plummer then informs us that Queer Robin so informed the Bat-serials that the only reason DC Comics introduced new female characters was to deflect readers from suspecting the awful truth, that Dick Grayson was just Jaye Davidson in drag.

Plummer then quickly vaults over the romantic history of the Robin character to focus upon his NEW TEEN TITANS alliance with "his taller, stronger, much more aggressive girlfriend Starfire." There follows a Werthamesque meditation on Nightwing's "non-gendered name." We hear nothing about the intermittent romance with Barbara Gordon-- 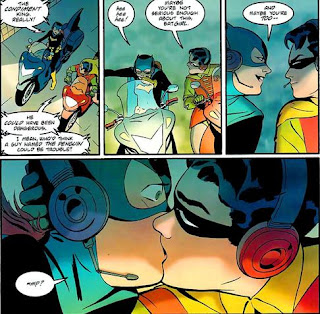 -- but Plummer is quick to vault ahead a few more years to the (out-of-continuity) DARK KNIGHT RETURNS, whose main significance is to portray a dead Robin. We are told that this is yet another assault on the Robin persona, even though Dick Grayson is alive but off-panel while Jason Todd is the one who died. 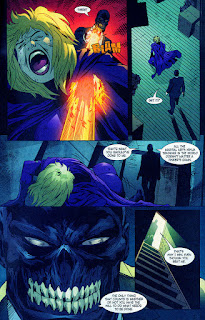 Another pole-vault, and we're in 2004, talking about the death of Stephanie Brown (not killed directly by Black Mask's power drill as I recall), and the return of Jason Todd as an amoral "hero" (which, even though he's come BACK to life, is I guess still being raked over the coals after a fashion). Then we finally get down to Plummer's theme statement: Robin is being continually killed and tortured because straight readers and/or creators see him as That Ole Debbil, the Queering Influence.

Oddly enough, this bit of "straightbaiting"-- in which straights are automatically assumed to be out to degrade and mortify anyone who may upset their sexual applecart-- borrows the exact same non-logical rhetoric as "queerbaiting." While there may well be many comic-book readers who do not like Robin, it's intellectually irresponsible to interpret those anti-Robin sentiments as part of some subconscious jeremiad against Robin's "queering influence."

Finally, I'll close by noting that Plummer doesn't appear to be very good about reading current stuff either. since he makes the statement. 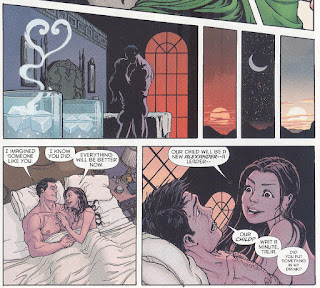 Not to mention the fact that, although Morrison did rewrite the events of the Barr-Bingham "Son of the Demon" graphic novel, he specifically has Batman task Talia with having drugged him at the conclusion of BATMAN INC.

Yes, just another day at the "How Dare They Marginalize Me and Then Not Admit It" corral.