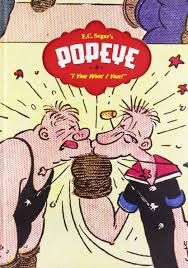 If this sequence of THIMBLE THEATER hadn't been given a title in this collection of Popeye's first adventures, I might have called it "the Beginning of the End for Castor Oyl."

As many comics-devotees know, Popeye was a late-comer to E,C. Segar's 1919 strip. The earliest incarnation of THIMBLE THEATER starred Olive Oyl and her boyfriend Ham Gravy, whose comical adventures included burlesques of stage "mellerdramas," including a villain who was something of a mustache-twiddling "Snidely Whiplash" type. Castor Oyl, Olive's enterprising but none too swift brother, was introduced in 1920 and seems to have become the strip's principal star until that fateful day in 1929 when Castor needed a sailor for one of his enterprises, and met a 40-year old gob with one eye and swollen-looking forearms.

The 1929 introduction of Popeye works both as a straight adventure and a burlesque thereof, and Segar gets a lot of mileage from the relationship of wheeler-dealer Castor to the plain-spoken sailor. Though Segar originally had no plans to keep Popeye around, allegedly readers protested Popeye's leavetaking at the end of the first story, so Segar brought him back and the sailor-man never left again. Eventually it was Castor Oyl who was edged out of the strip, though it may be that his "con artist" persona was channeled into J.Wellington Wimpy, who joined the strip in 1934.

THIMBLE THEATER's first few Popeye sequences make for good "near myths," especially a storyline featuring the first appearance of the sailor's recurring foe, the Sea Hag. This one starts with an excellent sense of creepiness when Popeye and Castor are obliged to seek sanctuary on the forbidding Black Barnacle, the ship of the Sea Hag. However, the story turns into a simple piracy yarn, with the villainess attempting to get hold of a cache of diamonds. However, the tale is the first time Popeye goes toe-to-toe with a bruiser twice his size. the Sea Hag's henchman Jabbo. For the next eight years of his life, Segar never tired of pitting the sailor-man against big overconfident brutes, whom Popeye would usually demolish with small effort-- all without any overt reliance on the consumption of spinach. 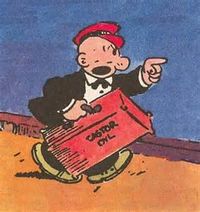 Segar probably realized that he had a hit in Popeye, but he wasn't quick to dump Castor after some nine years. He may have even realized that his team-up between a tall fellow and a runt had a nodding resemblance to Bud Fisher's MUTT AND JEFF, an insanely popular comic strip in the 1920s, though the order of appearance in that strip had been the opposite to Segar's: Mutt came first, and Jeff came following after. But Segar showed a greater psychological acuity than Fisher for playing his disparate characters off one another. Popeye was a hardened brawler, quick to fight at a moment's notice, but not too smart. Castor was usually a born coward, but he had enough wit to play on Popeye's insecurities and lack of sophistication. Popeye often complains about the "insulks" he receives from Castor, but he hardly ever responds with violence against the shorter man. Though I've not yet read the ensuing Fantagraphics collections of THIMBLE THEATER, it looks to me as if Segar was painting the duo as a partnership between "Brawn" and "Brain." 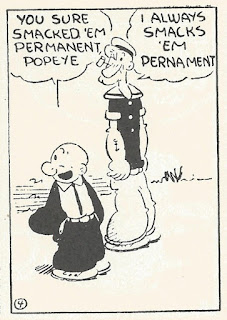 This is most evident in the most mythic tale in the first collection, "Mystery of Brownstone Hall." For the first time Segar places the duo in the position of mystery-solvers, when the owner of Brownstone Hall wants them to find out what's going on at his house. The owner rented the house out to a scientist, Doc Wattley, but a mysterious "dead circle" manifested around the house, making it impossible for anyone to come near it. All of this took place fifteen years ago, and Wattley has never emerged from the house. One spectator-- in the employ of the story's villain-- has kept tabs on the house with a telescope all that time, and reveals to Castor and Popeye that Wattley is still in the house, but that he mysteriously has not moved from a fixed position for all those years.

Popeye is very much at a loss to deal with these abstruse matters. His only response to the "dead circle," which kills plants and ennervates humans who approach the house, is to blame "evil spiriks." Castor is the real hero, who deduces a way to enter the forbidding domicile, while Popeye provides comedy relief with his superstitious fears. Not surprisingly, since a scientist is involved, there's a scientific rather than a supernatural resolution to the mystery, involving not only suspended animation but spirits switching bodies, as well. I'd be curious to know what if any pre-1930 SF-stories might have influenced Segar in these inventive uses of science-fiction tropes-- though to be sure, Segar doesn't really ground his story in the known technology of the time.

"Mystery" would never be a high-resonance mythcomic based on its cosmological content. However, the psychological interplay of Popeye and Castor is a different story. Even before this sequence begins, Segar has forged a strong friendship between the mismatched pair. The artist makes it clear that they need one another. Castor's original need for Popeye's skills and fighting-abilities evolves into a loyalty toward the language-mangling gob, while Popeye, despite his tendency to beat up people who offend him, likes Castor enough to tolerate Castor's insults and bossiness. That said, the sailor isn't too moral to tell the occasional fib, for he tries to take credit for solving the mystery of the Hall, though he's little more than a stooge to Castor throughout the sequence. Future readings of the collections may bear out my suspicion that the duo's detective career didn't last much longer. This sort of Castor-centric story wouldn't have satisfied the readers who wanted to see Popeye haul off and slug bullies, and in time Olive Oyl and the aforementioned Wimpy became the sailor's partners in his comical misadventures.

Still, "Mystery" is one of the few stories that makes Segar's original protagonist more than just a catchpenny fall guy-- proving that there were times that Castor Oyl wasn't at all hard to take.
Posted by Gene Phillips at 4:48 PM