Did I request thee, Maker, from my clay To mould me man? Did I solicit thee from darkness to promote me?== Adam's complaint to God, John Milton, PARADISE LOST.

Milton’s famous line from PARADISE LOST—essentially a more sophisticated version of the adolescent’s aggrieved cry, “I didn’t ask to be born”—sometimes appears as a preface in some editions of Mary Shelley’s FRANKENSTEIN. The attitude proves of key importance to understanding the story of a being created to be one-of-a-kind, and thus isolated from the human society of his all too mortal creator.

In this essay I’ve discussed Alvin Schwartz’s original “Bizarro” story from the SUPERMAN comic stirp, with particularly emphasis on the narrative’s indebtedness to the story of FRANKENSTEIN. Not only does Bizarro’s physiognomy resemble the angular countenance of the Universal film-monster as essayed by Boris Karloff—although Bizarro’s flesh looks rather like chalk-colored stone—but Bizarro too is an “imperfect copy” of normative humanity. True, Bizarro specifically emulates the form of Superman, an alien being who looks human but has “powers far beyond those of ordinary mortals.” But Schwartz frequently emphasizes that Bizarro, like the Frankenstein Monster, is a form of life that stands outside the normative biological process, and which may be considered not unlike God’s creation of mankind from the medium of clay.

Mary Shelley codes her reference to the Judeo-Christian narrative by giving the book the subtitle “The Modern Prometheus.” In some legends the Graeco-Roman Titan is said to be able to sculpt living men out of clay, and Frankenstein does essentially the same thing by sculpting a monster out of the “common clay” of dead bodies. Some critics have objected to the logic of Frankenstein’s piecemeal construction of the Monster, asking whether it would not have been more practical to simply revive a single dead body, whose parts were biologically designed to work with one another. But Shelley’s mythopoeic design was sound. By having Frankenstein choose random body parts with which to make his monster, she furthers the idea of his godlike status, choosing organs as Prometheus would have chosen this or that lump of clay to turn into a human being.

Schwartz’s Bizarro is obviously not made of disparate body parts; he arises as a result of radiation interacting with what Schwartz calls “unliving matter.”  At the end of the comic strip narrative, Superman, less than pleased to have an imperfect copy of himself running around loose, manages to devolve Bizarro back to his constituent elements—his “common clay,” if you will—though the last strip is unusually coy about showing Bizarro’s inorganic remains “on-camera.”

Later iterations of the Bizarro mythos in DC comic books of the Silver Age sought to emphasize broad farce rather than tragic alienation, and thus the “imperfect Superman” was given a planet-ful of other Bizarros, mostly copies of characters from Superman’s mythos. For a time they all inhabited a faux version of Earth, but cube-shaped instead of round, and they all spoke in reverse-logic, saying “Goodbye” in place of “Hello,” and so on. 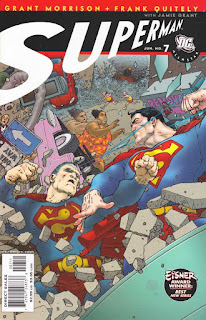 “Being Bizarro” is a re-writing of Bizarro mythology by Grant Morrison and Frank Quitely. It's a two-part story that takes place within a twelve-issue arc SUPERMAN arc, but the overall arc is outside my consideration here.  There are no direct references to either Shelley or Schwartz in this tale, though it’s interesting that artist Quitely dispenses with the “classic” chalk-faced look of the Bizarros, making them all look like they have faces of white clay.

In this re-imagining, the Bizarro phenomenon does not start out with one imperfect duplicate being conjured forth by some scientist’s invention. Rather, the “common clay” from which Morrison’s Bizaaros originate launches an attack against the living denizens of Superman’s world. From a domain termed “the Underverse,” also described as part of the “cosmic sinkhole” underlying normative reality, a “planet eater” organism seeks to prey on Earth. Despite the metaphysical nature of this proposition, Morrison’s script draws upon biological patterns. Thus the planet-eater takes the shape of another planet in order to mimic Earth’s appearance, but the organism botches the job and looks like a big cube in space. The Underverse then sends forth Bizarro-duplicates of living beings, one of which is a “Super Bizarro” who successfully duplicates some, though not all, of Superman’s p;owers. The duplicates that reach Earth can infect humans and turn them into Bizarros, which argues that Morrison sought to crossbreed the Bizarro mythology with the still popular “zombie infestation” stories.

Superman, after defeating the Super Bizarro, decides that a direct attack may discourage the invading planet-eater, so he launches himself into space until he reaches the planet called “Bizarro-Home,” and—he hits it. He hits the planet-eater so hard that it retreats back into the cosmic sinkhole. However, as soon as it does so, the shifts in gravity and solar radiation drain Superman of his powers. The planet, just like its clay-faced pawns, is not equipped to understand Superman’s plight, but in another display of protective mimicry, it produces more Bizarros, all imbecilic parodies of people whom Superman knows in his world. These new duplicates include goofy versions of Justice League heroes, and even a Bizarro Jor-El, who calls himself “Le-Roj.” 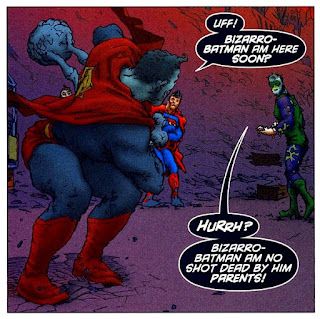 (As Bizarros of the Silver Age never inverted their names, this is probably Morrison having fun with a trope more associated with Mister Mxyzptlk.)  However, one duplicate the planet does not intentionally produce is an “aberration” who calls himself “Zibarro.” 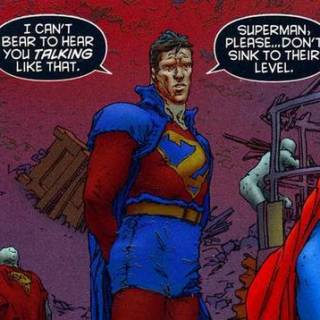 While the Super Bizarro is a “funhouse mirror” reflection of Superman’s powers, Zibarro seems a more direct reflection of Superman’s intellectual capacities. Zibarro is the only being on the planet capable ot talking in whole sentences and of feeling finer emotions. If the Frankenstein Monster and the original Bizarro were outcasts from human society by reason of their freakish physiques, Zibarro is alienated from his own people by virtue of his superior intellect. The soul-cry of the anguished nerd resonates as Zibarro complains to Superman, “Must only Zibarro search for poetry in this senseless coming and going?” The other Bizarros overhear this plaint and mock him, “Ha ha ha; Zinarro am King of Cool!” 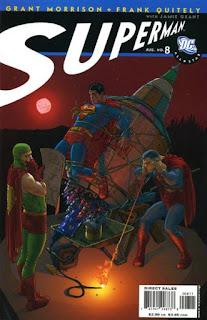 The hero’s sympathy for Bizarro-Home’s only intelligent being doesn’t obviate his own mission: to get off the planet before it makes its complete descent into the Underverse. Superman gets an inspiration, though, from the presence of Le-Roj, who acts as if he were the father of Zibarro, even though there’s clearly no normal biological link. The Man of Steel decides to build a rocket to take him out of the Underverse, just as Jor-El’s rocket saved infant Kal-El from the destruction of Krypton. To accomplish this,, Superman has to con the other Bizarros into helping him by employing their own reverse-logic—and even then, his plan may be foiled when the Bizarros get the idea of using the rocket to get rid of the irritant of Zibarro.

I’ll refrain from detailing the way in which Superman manages to escape destruction and to return to his own adopted world. The main emphasis of the narrative is on the courage of Zibarro, forced to do the right thing despite enormous temptation, and on his role in fulfilling Morrison’s idea of teleology. While Superman promises to return and liberate Zibarro at some later date, the Man of Steel voices his real opinion of the aberration’s place in the scheme of things when he tells Zibarro, “I know you think of yourself as a flaw, an imperfection, but you’re something more, Zibarro. You’re proof that Bizarro-Home is getting smarter.” Zibarro’s sacrifice, his re-descent into base matter, resembles the devolution of Schwartz’s Bizarro, though Morrison has extended the associations in many intriguing directions. Prior to the world’s descent into “the All-Night,” Le-Roj—whose reversed name looks like “Le Roi,” French for “The King”—perishes upon a sacrificial pyre, wearing a stereotypical king’s crown on his head as he dies. 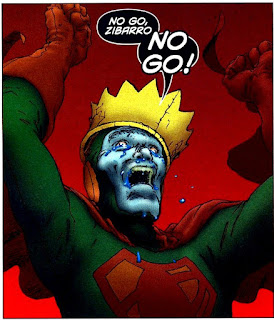 I don’t imagine that in the near future Morrison will re-visit his version of the Bizarro mythology, which is just as well, since this rethinking seems uniquely suited to his own priorities. Some myths just don’t travel well, and I for one would have to see someone like Mark Waid put his hands on Morrison’s concepts.
Posted by Gene Phillips at 2:59 PM