As I said in this essay, the "strongest mythic discourse" in Jack Kirby's "Fourth World" tetralogy was the title NEW GODS, while the other three titles followed more episodic patterns, akin to the majority of mainstream comics of the period. One can find mythic content in the other three features, however, and, not surprisingly, it appeared to best effect in MISTER MIRACLE #9, which was something of a conceptual bookend to issue #7 of THE NEW GODS. Both are "backstory issues" that fill in many of the blank spaces in Kirby's multi-issue epic. 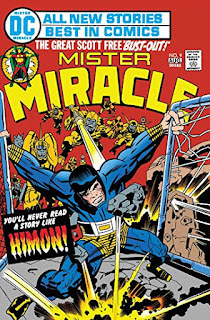 As I also noted in the above essay, Orion, the featured hero of THE NEW GODS, shared a common heritage with and the title character of MISTER MIRACLE. During the childhoods of the two heroes, a devastating war between the worlds of Apokolips and of New Genesis comes to a conclusion. The truce is cemented by an exchange of "war hostages," with Darkseid's child Orion being raised on New Genesis, while Highfather's son is raised on Apokolips. Darkseid confides in his aide Granny Goodness that his long game is to force HIghfather's child to endure such torments in his upbringing that he will eventually flee Apokolips, thus ending the truce at a time that proves convenient for Darkseid. Thus Granny dubs the child of New Genesis "Scott Free" with a note of sarcasm, though Jack Kirby has his own idea on the nature of freedom.

Young Scott Free is raised to be just one more pawn in Darkseid's planetary tyranny, where all inhabitants swear to "live and die for Darkseid." Darkseid even conceives himself as being something of an authoritarian parental figure to Scott, though he's perfectly willing to kill Scott in order to launch the war. However, Scott fortunately receives a better parental figure in the form of the character introduced in the story's title, Himon. 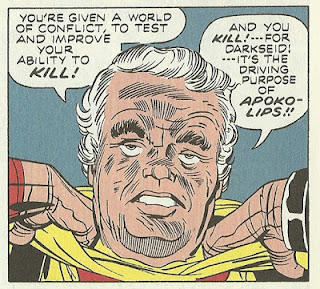 Purportedly the character was named for a real-world acquaintance of Jack Kirby's, name of "Hyman," but Himon is designed to be a great thinker after the fashion of scientific heroes like Edison and Einstein. Given a grandfatherly appearance, he claims credit for many of the crucial inventions in the history of Apokolips, such as "the Boom Tube" and "the Mother Box," a mini-computer able to draw upon the power of the supernatural "Source." He admits, in conversation with Metron of New Genesis, that his discoveries "fostered Darkseid's power," and so he operates as a rebel on Apokolips, constantly seeking to undermiine Darkseid's totalitarian power. He doesn't use the standard guerrilla tactics of the rebel, though in one case he does take vengeance on one of Darkseid's evil servitors. Instead, because Darkseid's power is founded on convincing his subjects to efface their own lives in his name, Himon seeks to inspire the beaten-down natives of Apokolips to find themselves. This includes not only Scott Free, who has been raised to be one of Darkseid's obedient troopers, but also a "kid-gang" like some of those who appeared in Simon-and-Kirby features of the 1940s. 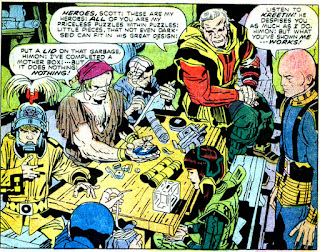 In contrast to Darkseid's "world of conflict," Himon seeks to inspire natives, like gentle Auralie, to express themselves. This leads to Scott's first encounter with his later lover, Big Bards of Apokolips, who liberates Auralie from Himon's company yet seeks to keep the innocent girl's transgression secret. 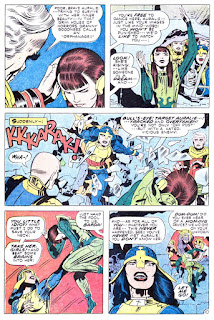 However, Himon's attempt to recruit disciples for a "kinder, gentler Apokolips" is foredoomed. Kirby undercuts his own use of a cute kid-gang by presenting them as the victims of an (admittedly bloodless) execution. (The one exception is the complainer seen two panels above, one Kreetin, who seeks to save himself but ends up perishing in an ignominious fashion.) 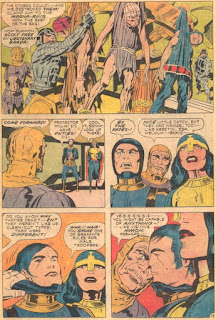 Of course, from the creator's point of view, the execution of the kid-gang merely exists to give Scott Free a foretaste of what it really means to "live and die for Darkseid." Finally, he bolts: 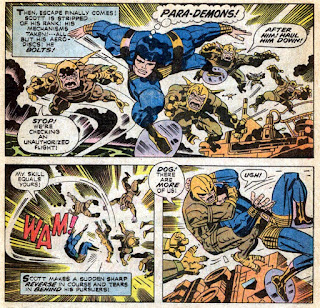 Barda helps Scott elude his pursuers, but, in keeping with the continuity established by previous issues, she doesn't succeed in escaping Apokolips with him. Just as Himon and Metron show Scott the way to reach sanctuary on Earth, Darkseid appears. 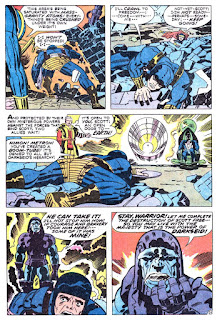 Darkseid's plan is served whether Scott leaves Apokolips alive or dead. But though the evil overlord was surely willing to let Scott be executed by any of Darkseid's underlings, he isn't willing to kill Scott himself. Being a Machiavellian type, Darkseid apparently would rather have Scott surrender himself to death, so that he will "live with the majesty that is the power of Darkseid." Scott doesn't buy the villain's sophistry, and escapes to "find himself." 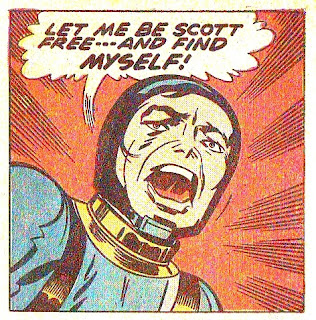 Prior to this issue, the basic concept of "Mister Miracle, Escape Artist and Superhero"-- allegedly based on Kirby's acquaintance with Jim Steranko, an amateur magician/escape artist-- didn't succeed in reaching this high level of symbolic density. That said, it seems that Kirby always had in mind some association between the broad concept of freedom and the specific motif of the superhero's "daredevil escapes from the villain's death-traps." In "Himon" at least, the artist succeeds in making the art of escape a metaphor for eluding the temptation to let one's individuality become subsumed by the tyrant's aura of power.

There are other motifs in the story worthy of comment, not least the self-serving character of Kreetin, who might be seen as Kirby's version of such Shakespearean self-servers as Thersites and "wind-changing Warwick." But any consideration of such motifs will have to wait for separate examination.

Posted by Gene Phillips at 5:04 PM