One of the few things I'll do to celebrate Halloween is to review the first of Dennis Wheatley's books about a group of occult detectives, sometimes called "the four musketeers." 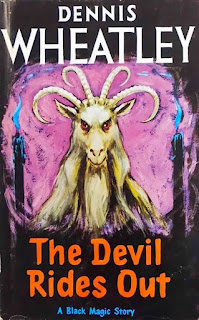 At the time Wheatley began his series of novels featuring this group of crusaders, a lot of the occult detectives in both America and Europe tended to be rather low-wattage in their adventures-- some examples being Algernon Blackwood's "John Silence" and Sax Rohmer's "Moris Klaw." One of the few rip-roaring occult adventurers, Seabury Quinn's Jules de Grandin, enjoyed almost twenty years of adventures starting in 1925. But De Grandin's violent little Frenchman was crafted with the pulp-readers of WEIRD TALES in mind, and so the stories I've read are all characterized by sex and sensation without much subtlety.

British writer Dennis Wheatley, like many other English writers renowned for supernatural stories, didn't deal exclusively with occult subject matter. The first novel to feature the four heroes-- American Rex Van Rijn, Britishers Simon Aron and Richard Eaton, and the French aristocrat Duc de Richleau (unquestionably named for the Dumas character)-- is a realistic suspense novel, published in 1933. However, the very next novel in the series, THE DEVIL RIDES OUT, introduces the idea that the Duc-- an older man who serves as mentor to the others-- is an expert in the occult. When Simon is suborned by a devil-cult headed by an evildoer named Mocata, only the Duc recognizes the reality of the threat. Along with his staunch American ally, the two of them seek to free Simon from spiritual bondage. In addition, young Rex takes a fancy to one of the prettier cultists, a woman named Tanith, and romance blooms, though she is even more important to Mocata's devilish rituals than Simon is. A little later in the story, Richard Eaton, his wife and his innocent child also become embroiled in the supernatural battle between good and evil.

Wheatley's novel has just as many pulp-elements as anything in Seabury Quinn, but Wheatley devotes considerable effort to building up a consistent mystic cosmos, clearly derived from the more ambitious ideas of occultists in the 19th and 20th centuries. Unlike Bram Stoker, Wheatley doesn't propound a strict dichotomy between Christian miracles and Satanic perversities: the Duc often mentions the beneficent aspects of pagan religions that he can use against Mocata's evil. Given that one of the later novels, STRANGE CONFLICT, shows a streak of racist sentiment, THE DEVIL RIDES OUT seems thoroughly cosmopolitan about other cultures. Simon Aron is Jewish, Eaton's wife is Russian, and though there are Satanists of other races, there's no intimation that they're bad because of their race. Wheatley clearly based Mocata on the scandalous magician Aleister Crowley, but Wheatley actually propounds a theory of how Magick works, even quoting Crowley at one point. This is certainly one of the strongest "occult detective" novels in existence, as well as a good rousing adventure-tale as well.

The Duc and his friends appeared in eleven books in all, though only three of them focused on occult topics. As I mentioned, I don't remember the second book, STRANGE CONFLICT, to be nearly as good as DEVIL RIDES OUT, but I may give CONFLICT a re-read before delving into the third and last one, GATEWAY TO HELL.
Posted by Gene Phillips at 4:16 PM