DON’T GIVE A FEIGE 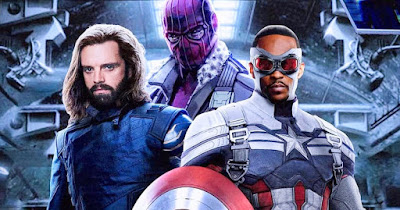 Upon completing my viewing of the FALCON AND WINTER SOLDIER streaming series, I’m moved to comment on some of the parallels between Kevin Feige, founder of the Marvel Cinematic Universe, and Stan Lee, the founder of Marvel Comics in its crucial sixties incarnation.

Stan Lee, like his mostly middle-aged colleagues at Sixties Marvel, certainly had no idea that their company would someday become a major influence on the course of American pop culture. Certainly, there could have been no thoughts of a coherent “universe” as such; early on, there would have been nothing more than the attempt to cross-promote Marvel’s various titles through the act of guest-starring appearances. That said, once the idea of an interacting universe caught the attention of the fans, Lee certainly did much to promote the idea, sometimes with minor effects, like having the Avengers consult Paste-Pot Pete on the subject of glue removal. The overall effect was playful, since comics were dominantly aimed at children.

Yet Lee made some cautious responses to fans who wanted to expatiate on heavy subjects like politics and philosophy. The ruminations of the earth-imprisoned Silver Surfer were never deep, but Lee knew how to dramatize the tone of the character’s forlorn exile from the heavens. As for politics, in the late sixties the editor apparently realized that America’s youth was trending toward liberalism. Thus he largely dumped the anti-Communist rhetoric of the early sixties—even though such rhetoric contributed to one of the better FANTASTIC FOUR stories—and he attempted, with mixed results, to write stories about hot-button issues like student protests, the Vietnam war and the Black Experience.

In one interview, Kevin Feige claims to have been far more of a film-nut than a comics-nut. Most of his professional efforts appeared in films that were “superhero-like” in some way, and unlike many pros who only dabbled in superhero films for sake of career advancement—Christopher Nolan for example—Feige seems to have intuited that he could make superheroes his specialty long before the launch of the first MCU film in 2008.

Still, when he produced IRON MAN, Feige would have known that the continuity game had proven very profitable for Marvel Comics. He would also have known that the 1980s had given birth to a new method of cross-promoting properties: the “crossover event,” sometimes involving the linked plotlines of five or six ongoing features, sometimes encompassing developments in all of a company’s titles. The first few MCU films were poised to build to a “regular crossover” insofar as the heroes of THOR, IRON MAN, CAPTAIN AMERICA and INCREDIBLE HULK would coalesce into THE AVENGERS. Managing such a crossover situation within the medium of theatrical film was arguably more involved than doing so at a comics-company. But Feige took things even farther. Starting with the second THOR film, Feige introduced the potential for a “crossover event”—one that would involve all the franchises under his control-- and he did so by drawing loosely upon one of the first such events from Marvel Comics: Jim Starlin’s “Infinity Gems” narratives.

Within the context of comics aimed largely at kids, Stan Lee was stronger at philosophy—at least insofar as he could convey philosophy through characterization—than he was at politics. Feige took the opposite course. Though he didn’t signal his full political agenda in the earliest films, over time the success of the MCU allowed him to indulge in considerable Leftist constructions—not least with the dissolution of SHIELD, whose spy-games had been of inestimable service to the Marvel Comics superheroes. But his philosophical scope never progressed beyond politically informed platitudes, and his interpretations of such Marvel favorites as Thor, Ant Man, Wasp, Black Panther and Spider-Man show a disinterest in strong characterization and a tendency to drift into inane comedy.

In conclusion, although Stan Lee and Kevin Feige both found new ways to make superheroes appealing to mass audiences beyond the sphere of kids, they diverged sharply in their strategies. Stan Lee did so by opening up the dramatic potential of superheroes, giving them all different voices and orientations. Initially Feige showed some skill with superhero dramatics in IRON MAN, which he might have learned from observing the way Sam Raimi transferred the saga of Peter Parker into his superior take on SPIDER-MAN. But over time Feige came to emulate Lee less than Jim Shooter, the Marvel editor-in-chief who launched the first “crossover events” at the company. Thus in the AVENGERS film-series a promising emotional arc, such as the romantic interaction of the Vision and the Scarlet Witch, is conveyed through by ham-fisted exposition, because the script requires far more emphasis on forcing lumps of event-oriented plot-action down the throats of the viewers. I frankly cannot guess how Feige will further monetize Marvel characters for fun and profit in the next ten years. However, it's worth remembering that Stan Lee's "golden years" petered out in the space of a little over ten years-- and he was much more creative than Feige on the latter's best day.

Posted by Gene Phillips at 1:12 PM