One of the most intriguing images in the entirety of William Marson's WONDER WOMAN canon appears on page eight of "The Icebound Maidens." The Amazon, having voyaged to Paradise Island to counsel young Amazons in facing their challenges with willpower, is assigned to do the same for "the daughters of Venus." Prior to this tale, Marston had built four stories around the planet Venus, inhabited by beautiful winged girls who, like the Earth-Amazons, worshipped love and beauty in the incarnation of the Greek goddess Aphrodite. "Maidens" is the final Marston story using the Venus-women, and this time the writer merges this myth-trope with that of an icon of Judeo-Christian belief, that of the Garden of Eden. In the Old Testament, God commands that Eden is off limits to mortals once Adam and Eve are expelled, appointing one or more cherubim to stand guard with a "flaming sword." In an audacious image, Marston's Aphrodite is seen commanding a hand with a flaming sword-- presumably a denizen of Heaven, not exactly on speaking terms with pagan goddesses-- to propel the entire Garden of Eden to a subterranean domain beneath the ice of Earth's South Pole. 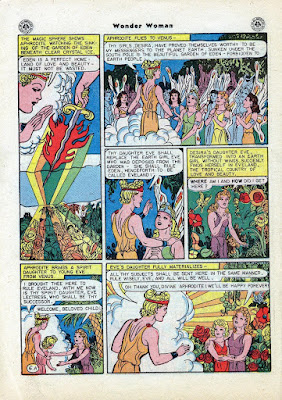 To be sure, Marston has no interest in engaging in involved cross-comparisons between Greek and Jewish myth. He wanted a broad contrast between Eden, a land of life, and the frozen wastes of the Antarctic, a land of death. Aphrodite transforms one Venus girl into an Earth-female (which effectively means clipping her wings) and sends her to live in Eden, renamed "Eveland" to stress its new status as a "land of women." Providentially, the girl's name is Eve, so even if the First Man is gone from Eden, an avatar of the First Woman is still allowed to rule therein. And as the Hebrew God gave Eve to Adam for company, Aphrodite gives the second Eve a "spirit daughter" with the odd cognomen of "Eve Lectress" (a labored pun on the Greek name "Electra," more on which later). Somehow, possibly through parthenogenesis, dozens of other maidens join Queen Eve and Eve Lectress in the subterranean garden. 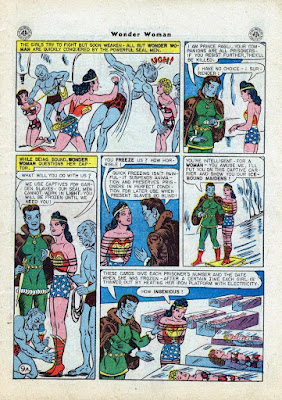 But though the Eveland girls have left men out of their hortus conclusus, the ruthless male element asserts itself. Though one might expect that Eden has all the pleasures that the Venus-girls could want, Eve Lectress is lured into Bitterland, the "dark ice caves" where dwell the brutish Seal Men. Periodically the Seal Men, who cannot stand strong light, capture Eveland girls and make them work in their gardens. These gardens require blinding light to nurture the males' favorite delicacy, "pomoranges," and so the Seal Men want the maidens to toil on their behalf, even though eventually even the Eden-girls will lose their sight with these labors. The title "Icebound Maidens" refers to the fact that the cold-hearted villains literally keep a supply of replacement girls on ice for future use. 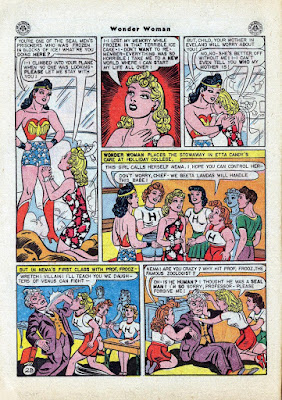 Wonder Woman ventures into the domain of the Seal Men and frees all of their prisoners, but somehow conveniently forgets about looking for Eve Lectress, nor does Queen Eve mention not having recovered her daughter. As the heroine journeys back to man's world, she finds she has a stowaway on her invisible jet: a young Eveland girl who claims her name is "Nema." The origin of this Marston-name is fairly obscure: it doesn't seem to scan well whether one compares it to "Nemea," the Greek valley from which the Nemean Lion hailed, or to the Hebrew word "amen," which is what "nema" spells backwards. Whatever the name's meaning, Nema is Eve Lectress, running away from home because she's guilty of her transgressions-- though Marston doesn't explicitly condemn her for seeking out Bitterland for unstated (maybe sexual?) reasons. 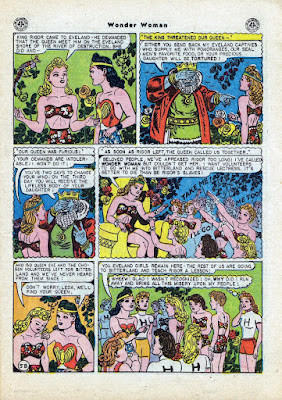 Wonder Woman allows "Nema" to mingle with the Holliday Girls, so evidently she doesn't figure out the girl's true identity. But after a few days someone from Eveland rings up the Amazon on her mental radio, summoning Wonder Woman back to the garden. The heroine takes along all of the Holliday Girls and Nema, who still doesn't reveal her true nature to anyone. It seems that because Eve Lectress is missing, Queen Eve, acting the part of the Greek fertility-goddess Demeter, goes looking for her in the unfertile domain of Bitterland. The queen is almost executed by King Rigor (like "rigor mortis?"), the nasty lord of the Seal Men, but the Amazon rescues Eve and all other prisoners once again. 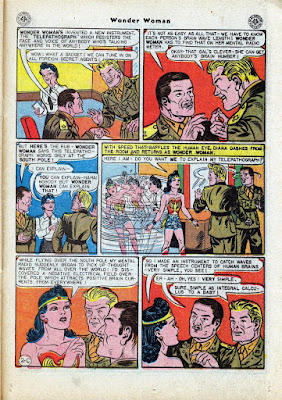 By Part Three of "Maidens" Princess Diana must have started  to feel like a bouncing ball, for a little later she'/s again forced to return to the South Pole. This time, however, it's her own ingenuity that provides the excuse. Diana has invented a "telepathograph" which has potential value to spy on the thoughts of foreign agents. (I don't know if Marston plotted the story before or after the surrender of Germany in May 1945, but it probably wasn't before the dropping of the atom bomb on Japan in July; in any event, this segment contains no explicit reference to the WWII conflict.) In any event, the new spy-device can only be tested at the South Pole, so the Amazing Amazon takes Steve Trevor to test the device. 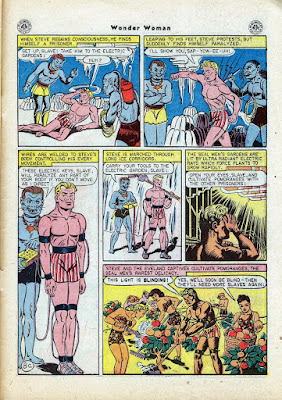 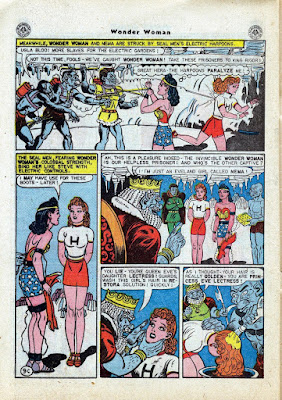 The subject of the telepathograph gets abruptly dropped after it functions much like the mental radio, alerting WW to the fact that those Eveland girls are in cold water again. The heroine meets with Nema, who still hasn't come clean to her mother, and they go in quest for King Rigor's new captives. Steve follows, but he's caught and sentenced to work in the blinding light of the pomorange gardens. Around the same time, Wonder Woman and Nema are captured, and for some reason King Rigor is the only one who figures out that Nema is Eve Lectress with a dye-job. Rigor tries to blackmail Queen Eve into sending him a steady tribute of girls for servitude by threatening to flood the fertile garden with the destructive waters of male potency (or something like that). 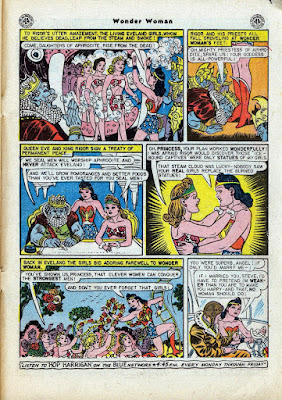 Wonder Woman escapes imprisonment and runs a scam on the otherwise clever king. When the monarch attempts to sacrifice several de-thawed maidens to the Seal Men's effigy, a fire-mouthed "walrus god," the Amazon substitutes statues for the sacrifices, and then fools Rigor into thinking she can revive the slain girls from death. This road-company Lord Hades capitulates and signs a treaty with Queen Eve, and the latter generously claims that the women of Eveland will still supply the Seal Men with their precious "pomoranges," though nothing is said about what the women will get in exchange.

Despite the references to the Eden trope in the early pages of the narrative, clearly the Demeter-Persephone myth was central in Marston's mind. While Eve Lectress has nothing in common with the most famous owner of the "Electra" name-- the daughter of Agamemnon who gave her name to the "Electra complex"-- but Marston may have known that an Oceanid named Electra was supposed to be one of Persephone's companions before she was abducted by Hades. Queen Eve never quite duplicates Demeter's feat of laying waste to the Earth while she searches for her lost daughter. Possibly this was because "Bitterland" stands in for the image of the Earth made infertile? To be sure Marston's handling of Eve Lectress's motivations is clumsy in the extreme, and I tend to believe that Marston was dancing around the possibility of Eve the Second having a fling with one of the Seal Men. Though Rigor is a standard homely monarch, he has a fairly handsome son, Prince Pagli, though Pagli and Eve II are never seen together. ("Pagli" seems derived from the name of the Italian opera Pagliacci, which means "clowns"-- and if there's any symbolism there, it went past me.) The "pomoranges" are visually modeled on ordinary oranges, which flourish in the very light that the Seal Men despise-- but symbolically, these made-up fruits are more strongly linked to the Greek fertility symbol of the pomegranate. In the Persephone myth, the daughter of Demeter makes the mistake of eating pomegranate seeds in the underworld, which means that she must return periodically to the world of Death-- during which time Demeter causes the mortal world of living things to undergo the "rigors" of winter.

In closing I'll note that Marston's assistant Joye Murchison recapitulated many of these Persephone-elements in the 1946 story "In Pluto's Kingdom." This time, however, Pluto-Hades abducts women not to make them labor in harsh light until they go blind, but to serve as sources of light to Pluto's dark kingdom.

Posted by Gene Phillips at 5:03 PM