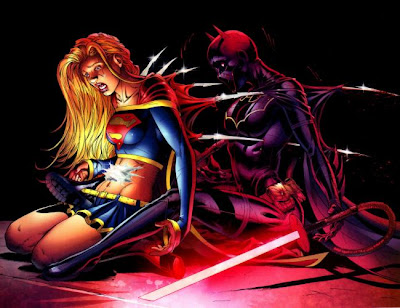 Look, ma, it's a couple of superladies in--

As explained here, I first encountered this Journalista post by Dirk Deppey this year, over a year after he posted it. My only reaction to the picture, as I also explained, was that I couldn't tell what was going on from that one panel so as to judge whether or not the picture was replete with what Deppey called "superhero decadence."


I was in no hurry to rush out and find a copy of SUPERGIRL #14 in order to confirm or deny Deppey's assertions. In the last year I haven't gone out of my way to read many titles, mainstream or "alternative," but I had read some odd issues of the New Millennium's Supergirl. Of the issues I read, I found them moderately interesting as meta-commentary on the Silver Age original but not entertaining enough to stick with the title.


Then a local comic-shop had one of its semi-annual sales, so I picked up a bunch of stuff, including several SUPERGIRLS, at half price. I've still not read the full range of early issues, but I have now read #14 and adjacent issues.


And I think Dirk Deppey's opinion is pure crap.


Like most Journalistas, Dirk Deppey is spiritual kin to Fredric Wertham. The good doctor remains justly famous for sloppily-researched, heavily-slanted interpretations of Golden Age comic books. With the possible exception of Marston's WONDER WOMAN, most of the comic books Wertham attacked would seem entirely mild to modern readers.


SUPERGIRL #14 should be no different. It's not a particularly glowing example of good formulaic comics, and this review points a lot of problems in Joe Kelly's script.


There's no denying that images of violence can take on connotations of sexuality, either with or without the express intentions of the artist. Deppey himself says as much.


But his assumption that this particular expression of violence MUST connote sexual perversion to the majority of its fannish audience-- who are of course Deppey's real targets, those dopey fanboys who just won't appreciate the great comics-art published by Fantagraphics-- shows stunning ignorance as to how sexuality and violence interact in modern entertainment.

Are there sexual fetishes dealing with women fighting? Most definitely.

Are there sexual fetishes dealing explicitly with women stabbing one another? Possibly, though I couldn't find any in this list of paraphilias.

If there is an actual recorded sexual fetish dealing with women stabbing other women with crystals growing out of their backs, I'd sure like to know what kind of pseudo-Greek cognomen you'd give to the damned thing.

Deppey's interpretative blunder stems from the over-identification of sex and violence that Daddy Freud pioneered. I'll be writing more on the distinctions between the two phenomena elsewhere, but frankly, the Supergirl thing strikes me as pure violence, no more intrinsically sexual than the most uninspired drawing of 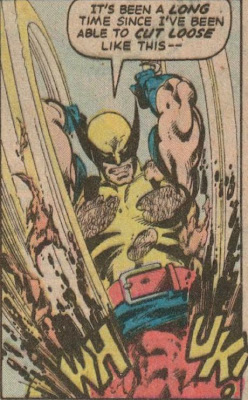 The problem as I see it is that elitist critics like Deppey
have no idea how to deal with the unique dynamizations
of violence, so the best they can do by way of analysis is compare them to the dynamizations of sex (even if,
granted, no critic besides me would be using the
term "dynamization.") Further, by assuming that the
two phenomena overlap much more than they do, they can once again promote the notion of the Pedagogical Paradigm,
and "prove" that true maturity is to be found in the works that they just happen to publish.

I don't think most fans have been fooled by the Paradigm
enough to turn over their fan-status and assume the mantle of artwads. Perhaps the JOURNAL's recent conversion from print to online status signals as much.

As I've had occasion to say before--

More later.
Posted by Gene Phillips at 10:15 AM

Dirk's a lover of manga -- hardly a Werthamite. Anyway,

By “decadence” I don’t mean sexual deviance, but rather “jaded but unwilling to move on, with one’s tastes growing more ornate and polluted in the process.”

That image works well enough to show this.

Charles, your line of thought here is no different from the one I critiqued from Sean Collins in Part 1 of THE DIVIDING LINE, which *you* should have read before making this post.

Summarizing quickly, I showed that though Collins attempted to remodel the definition of superhero decadence to apply only to incestuously-ingrown superhero mythologies in general, and though Deppey approved of this re-definition, it did not erase the fact that Deppey's original post was about the artistic worthlessness of grafting pseudo-mature concepts onto a genre meant "for children."

I pointed out that while one *could* use Collins' re-definition to attack such clean-cut "fanwanks" as any Roy Thomas continuity-fest, as well as the more sexy-violent stuff like BLACKEST NIGHT, the Thomas stuff could not be accused of any "pseudo-mature" content and so Deppey's ridiculous example of the "Supergirl fuckdoll" would not apply across the board.

In short, I think Deppey's comment about "sexual deviace" was just a smokescreen against the inevitable counter that there's a lot of "sexual deviance" in the "really mature" works promoted by He Who Should Not Be Named (at least in this response).

I also believe that the word "decadence" automatically carries the connotation of eroticism and "sexual deviance" no matter how much one tries to hedge around that fact.

I don't imagine Gershon Legman and Fredric Wertham shared much in the way of literary tastes, any more than Wertham and Deppey do, but what all three have in common is the elitist approach to discerning quality, with which I continue to disagree.

Charles, I think you can do better than these niggling comments, so in my next post I'm going to challenge you and all comers to do more.

Sadly, the recent JOURNAL upgrade has reconfigured things so that the link in the main article no longer takes one directly to the "superhero decadence" article from 2007, but to the current Journalista page.

I imagine one can find it with some looking, though I wouldn't rule out its having been given the deep-six. It's happened before.