Now here's a comparative example as to how dynamicity sorts out in popular fiction.

My chosen examples here are two 1960s teleseries, STAR TREK and VOYAGE TO THE BOTTOM OF THE SEA.  Getting some obvious points out of the way:

The former is set in the far future; the latter in the near future.

Both serials deal with heroes in military service who regularly encounter marvelous threats.

The former is a drama with elements of adventure, comedy and irony.  The latter is adventure with only minor dramatic elements.

STAR TREK is a combative drama, in that it regularly features conflicts between the megadynamic forces of the heroes and those of their antagonists. VOYAGE is a subcombative adventure, in which the heroes are essentially mesodynamic though they sometimes overcome megadynamic threats.

The megadynamic forces commanded by most of the TREK heroes-- aside from one character, Mister Spock-- stem from their weapons; without said weapons, the heroes are ordinary men.  The heroes of VOYAGE control one formidable weapon, a nuclear submarine armed with missiles, which despite its superior firepower remains a naturalistic resource.  In both cases, without these weapons, the heroes of both serials are ordinary men (except Mister Spock) who possess varying ranges of combat-ability.

Finally, even putting aside the heroes' weaponry, the most significant difference for the purpose of this essay is that producer Gene Roddenberry's TREK regularly emphasized climaxes in which one or more of the main heroes (most often just Captain Kirk) engaged in battles featurng what I've termed "spectacular violence," while the heroes of Irwin Allen's VOYAGE employed for the most part mere "functional violence" (categories explained in more detail here.)

Here's a fan-favorite example of a Captain Kirk battle, from the episode "Gamesters of Triskelion." 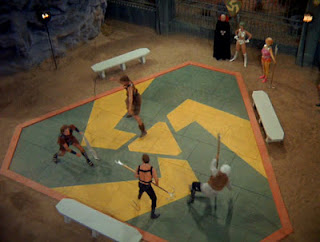 Though Kirk is an ordinary man, his command of fighting-skills is clearly extraordinary, in that out of four opponents he kills two, wounds one and easily subdues the wounded opponent's replacement.

In contrast, though I haven't recently studied Allen's VOYAGE series in fine detail, I have seen all of the episodes, and I'd be surprised if the show contains any scenes that go beyond the most functional: "A shoots B, X punches Y."  It may be significant that most of the screen caps available on the web show the VOYAGE stars standing around in sedate poses like this one: 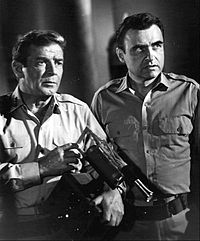 Because of the lack of spectacular violence, I see VOYAGE as a subcombative form of adventure.  The heroes are perhaps a little better at combat than the average man-on-the-street, but not by much.  This type of hero thus fits my definition of the mesodynamic hero from this essay as possessed of a dynamicity ranging from "good to fair," a grouping that thus far also includes the original version of Aladdin, Doctor Who and Brenda Starr, three other subcombative types analyzed here.

Now Jack Burton, cited here, is also a mesodynamic hero, but unlike the heroes of VOYAGE and the other three, who depend a lot upon luck and/or cleverness, Burton has one decisive physical skill with which he managed to take down a Chinese wizard with clearly megadynamic powers, and that skill is the one thing that at least temporarily boosts him to a megadynamic level of dynamicity.

On a related note, I'm currently debating with myself as to whether the "meso, meso, micro" distinction applies across the  board to all heroes.  It's a possibility that it may that it applies principally to (1) naturalistic heroes like Dirty Harry, (2) uncanny heroes like Zorro and Tarzan, and (3) heroes whose marvelous abilities stem entirely from their weapons, as with (as cited here) Batman.

In other words, it may be impossible or just impractical to speak of such distinctions with regards to characters who possess marvelous intrinsic powers.

For instance, the power to predict the future is a real and marvelous power, as with Dream Girl of the LEGION OF SUPER-HEROES: 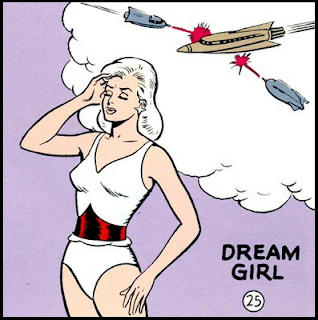 Also marvelous in nature is the ability to heal oneself quickly from any wound or sickness, as with Ben Richards of the 1970s teleseries THE IMMORTAL: 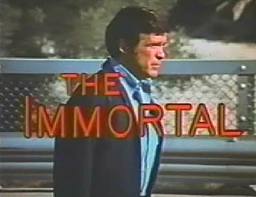 However, these are not the sort of talents one wants fighting off your basic alien invasion.  Nevertheless, they are no less marvelous than the talents of Thor and Iron Man.  If these two characters can be fairly deemed as belonging to a "microdynamic" level of force, it would still have a very different character from what I mean when I speak of microdynamic protagonists-- which assumes characters who have only a "fair-to-poor" level of power, and usually connotes those that have no special power whatsoever.

Posted by Gene Phillips at 2:55 PM