Here's a quick illustration of some other modes in which my "three-part harmony of dynamicity" works in practice, taken from John Carpenter's BIG TROUBLE IN LITTLE CHINA. 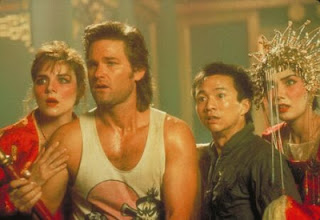 In this shot, we see four characters.  Of the four, the one to the far right is not a major player in the story, though she supplies the original motive of the other three heroic figures to get involved in fighting a Chinese wizard and his kung-fu henchmen.

At the far left, we see the character Gracie Law (Kim Cattrall), a reporter who gets mixed up in the battle.  By my theory of dynamicity she would be *microdynamic,* in that she possesses only minimal ability to defend herself.  I think she gets off one punch to an off-guard henchman during a general melee, but she's not a tuff girl.

Next we see the technical star of TROUBLE, Jack Burton (Kurt Russell).  Played for some degree of comedy by Russell, Burton is supposed to be a tuff guy-- at least in his own bailiwick as a truck driver.  But when he gets mixed up in "oriental intrigue" (cue Todd Rundgren), it's clear that his toughness is no match for even the least formidable of the main villain's henchmen.  He is therefore *mesodynamic,* in that he represents a "middle" level of toughness.

Third over is Wang Chi (Dennis Dun).  In contrast to many Classic Hollywood films in which the Asian Guy was seen as less dynamic than the white male star, Wang is the only one who possesses an exceptional level of martial-arts ability.  Because he's seen engaging the exceptional henchmen of the villain, sometimes with an unquestioned victory, Wang Chi is *megadynamic.*

Burton, however, has one ace in the hole that gives them the victory over the main villain: a simple knife-throwing trick.  It's arguable that his possession of this one special talent *temporarily* raises him to a *megadynamic* level.

Thus the *mesodynamic* level, like a lot of my "middle categories," is one with an intrinsically amphibian nature.
Posted by Gene Phillips at 5:48 PM