In the first part of HERO AND VILLAIN, MONSTER AND VICTIM I said:

While both of [the processes of plerosis and kenosis] are particularly abstract as described above, plerosis is best conceived as the life-force engendered by the contest of hero-and-villain, taken seriously for the adventure and humorously for the comedy, while life is purged or otherwise compromised in the black-comic irony and in the drama.

I didn't write anything about the "monster-victim" trope there, but I did so in Part 2:


The hero's [by which I meant the protagonist's] power of action is often compromised, so that it's credible when and if he meets a dire fate-- which fate is summed up by the triumph of "monster over victim," aka the reality principle.

I discarded the formulas featured in Part 2, but this segment should make clear that my initial idea was to imply that the "victim" was a character whose *dynamis* implied failure more than that of the other life-force figure, the "hero"-- even though, to complicate things all to hell, in literary studies the word "hero" can mean pretty much any protagonist-figure in any sort of story.  It even applies to a loathsome viewpoint character who deserves to be destroyed, like the nasty protagonist of this Steve Ditko horror-tale "The Gentle Old Man:" 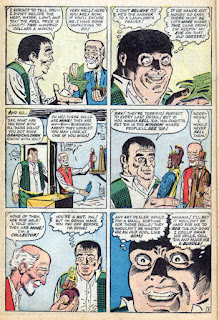 In Part 3 I re-arranged my formulation so as to emphasize the stature of the "victim" as a life-affirming force that is more compromised in some way; he's bound to lose in the irony-mythos, and even when he wins in the comedy-mythos, it's principally due to the forces of luck.  In contrast, the hero, the conceptual opposite to the "victim," possesses a superlative chance of triumphing in the adventure-mythos and a fair chance of doing so in the drama.

Yet "victim" really doesn't suggest a character who can win under certain circumstances, but rather, someone who's already lost the game.  Therefore I've invented the term "demihero" for a protagonist whose power is compromised in a given manner.

I also stated in Part 3:


The victim's true characteristic is to be allied to the ludicrous just as the hero is allied to the serious, as per my various remarks on these Schopenhaurean categories. With this in mind, "victim" should not connote a disempowered state within the sphere of narrative analysis, for when he is a primary actor he can be quite powerful. But he creates the expectation of losing even as the hero does of winning. And further, most victims encounter conflict in what I term an "intuitive" manner-- that is, not actively seeking trouble as heroes often do, but simply seeking to live life on a basic level-- just as many if not all monsters seek to do.


I explained this distinction with reference to Schopenhauer's dichotomy between intuitive and abstract representations.  What Schopenhauer called "abstract," I translated as "intellectual," and as of this essay I've decided that I think "intuitive" is also misleading for my purposes, so I'm now changing my dichotomy as being between "the intellectual" and "the instinctive."


The nasty protagonist of "The Gentle Old Man" is not really fit to be called a "hero" or a "villain," but in some ways he does mirror the nature of the "monster:" he wants what he wants when he wants it, with no intellectual mediation.  He is a "non-innocent victim," a character who deserves to be destroyed, so that the anomalous force represented by the "gentle old man"-- what would be "life-denying" in the case of an innocent victim-- ends up doing good by removing him from society.  As a shorthand to describe his tendency toward failure, I term this character a "demihero."

But just as I stated with regard to victims, demiheroes need not be utterly helpless.  Consider the character Jonathan Harker, pictured below as played by David Manners in the 1931 DRACULA. 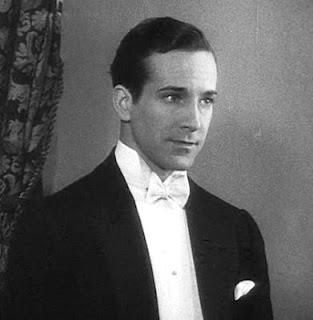 In the original novel Harker is a victim who has a limited ability to fight back against the focal character of Dracula.  He's much less competent in the stageplay that gave rise to the 1931 film, while he's disposed of rather ignobly in 1958's HORROR OF DRACULA, reviewed here.  Regardless of his degree of efficacy in each rendition, he's still essentially a demihero, in that he never inspires the notion of triumph on his own, though in the novel he does at least manage to form part of a joint task-force that takes down the superior dynamicity of the vampire-lord.

Now, I'm not contradicting myself by citing two examples from dramas.  When I write that the drama is defined principally by the conflict between a comparatively empowered hero and a monstrous opponent, this is a generalization that doesn't preclude the idea that in some dramas the less empowered demihero is the sympathetic viewpoint character.  Similarly, even though the irony is the least favorable to the happy ending, the irony's version of the hero does sometimes appear, as with my frequent example of Marshal Law. 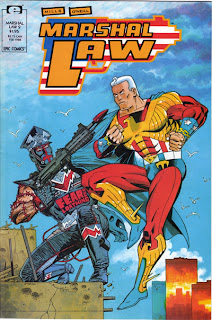 More on these matters later.
Posted by Gene Phillips at 6:10 PM