In FINAGLING THE FOCAL PRESENCE I noted that the "fake vampires" of the 1935 film MARK OF THE VAMPIRE qualified as the focal presences of that narrative.  I haven't yet commented on the dynamics by which "many" focal presences-- or at least more than one-- become "one" in occupying the imaginative center of the narrative.

What I call the "ensemble" here is essentially in line with Wikipedia's definition of the theatrical term "ensemble cast:"


In MARK OF THE VAMPIRE, the illusive vampires Mora and Luna are an ensemble of two: although Bela Lugosi was the actor with the greater star power, Carroll Borland's Luna is equally important to the story insofar as both cultivating the vampiric hoax and symbolizing the incest-theme suggested by the main plotline.

It's also possible for some films to have an ensemble of two in which the characters are opposed to one another yet are potential dangers to the normal viewpoint characters, as seen in 1934's THE BLACK CAT.  Here Lugosi's Verdegast and Karloff's Poelzig are deadly enemies, and their contest is the main plot of BLACK CAT. 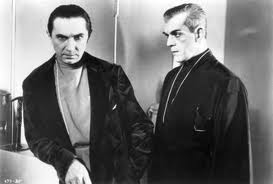 Verdegast is nominally more sympathetic than Poelzig, but the dynamic between them is not one of "hero" vs. "villain," where it's generally true that either the hero or the villain is the imaginative center of the narrative.  If anything their contest seems closer in spirit to the contest of two monsters, where one is wholly malign while the other is somewhat benign, at least with respect to innocents pulled into their drama. A similar effect "opposed ensemble-characters" appears in more extreme fantasy-films, like the 1968 "kaiju" flick WAR OF THE GARGANTUAS. 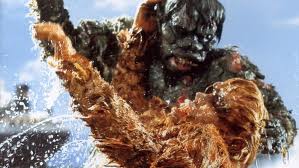 As my title implies, it's standard practice that features focused on teams of heroes-- like the AVENGERS-- or even villains-- like THE SECRET SOCIETY OF SUPER-VILLAINS-- have "ensemble" centers as well.

With dramatic programs, it can be argued whether or not a villainous forces is part of the "ensemble" or not, as with Alexis Colby on DYNASTY or Benjamin Linus on LOST.  I would tend to say that in these particular cases, the villain is opposed enough to the "good" heroes that he is more a regular cast-member than a part of the ensemble.  But I'll reserve judgment as to other permutations.

Posted by Gene Phillips at 4:48 PM