I didn't expect a general-interest documentary like PBS' SUPERHEROES: A NEVER-ENDING BATTLE to touch on a lot of fine textual points about comic book superheroes.  However, I did think that if the doc's creators brought up a given subject, they would pursue it to some sort of logical conclusion.

Understandably, the first of the doc's three parts dealt with the Golden Age of superhero comics.  The script, which aimed to be an upbeat examination of the history of American superheroes, quite logically did not dwell overlong on the lack of strong nonwhite heroes, though the issue of racism was addressed.  However, the script-- which included commentary from "Wonder Woman" actress Lynda Carter and from one of the comics' writers--  seemed to be building to a point about the history of female characters in a genre aimed-- at least by some of its proponents-- at male customers.  But though the first part provides strong coverage of the background of the most successful comics superheroine of the period-- as well as her eccentric creator-- the other two sections of the doc seem indifferent to most other developments in the arena of superheroine-creation.  Many well-known male heroes are covered in detail during those two sections-- Spider-Man, the Punisher, Spawn-- and even a few nonwhite male heroes, like Luke Cage and the Black Panther, are referenced.  But by the end of the doc, though one sees various "sisters in spandex" in passing, an outsider could be forgiven for thinking that the superheroine domain begins and ends with Wonder Woman. 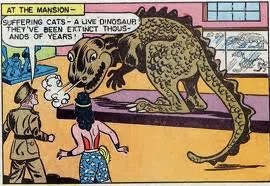 I know that a general-interest documentary could not have expatiated on the significance of the plethora of other Golden Age Amazons.  Today it means nothing to say that Harvey Comics' "Black Cat" (1941-1951) stayed in print for almost the entire duration of the Golden Age itself.  It also would have meant little to celebrate feminine crimefighters whose names-- Black Canary, Liberty Belle, Blonde Phantom-- did not become, any more than Black Cat's, figures with which non-fans might conjure.  But were none of the heroines of the later "Ages" as worthy of mention as Wonder Woman? 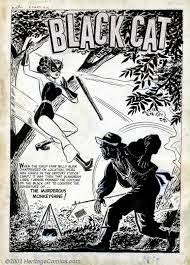 I think that there have been many, but their prevalence is qualified by a "sea-change" in the history of superhero comics.  Since the 1960s, many of the most famous female crimefighrers have not been solo combatants, but have flourished within superhero groups.  Indeed, the idea of the "team book" became far more significant in post-Silver Age comics-history, apart from the role of female heroes in those teams.  Most of these fighting-femmes came to prominence in teams, as with the Invisible Girl/Woman, Marvel Girl, the Wasp, Elasti-Girl, and Scarlet Witch.  A few characters introduced as team-members went on to star in independent features of some note-- such as Power Girl-- yet it's arguable that they remained more celebrated as members of teams.  Similarly, heroines who started in their own features and failed to sell adequately-- as with the She-Hulk and Ms. Marvel-- often ended up being recycled into team-situations.  To be sure, this recycling often took place with male heroes as well. 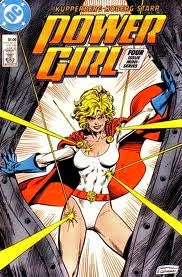 Another issue inadequately raised is that of the "one-off" superheroine, who owes her existence to a male hero's mythos.  This category would include not only sidekick-types of the sort that commentator Trina Robbins sneered at in the doc, as with "Batgirl" and "Hawkgirl," but also characters like reformed Bat-villainess Catwoman.  That said, I could make the case that Catwoman, whose feature has now been published almost continously since the early 1990s, has proven a more substantial figure than the Punisher, a spin-off from the Spider-Man feature.  And I say that as one who did enjoy the PBS doc putting the Punisher's first exploits into contemporary sociological perspective. 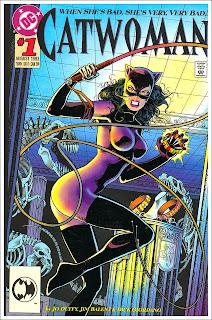 Invisible (Girl) Woman, Wasp, Scarlet Witch, Elasti-Girl, Marvel Girl, Storm, Shadowcat, Power Girl, the (Helena Wayne) Huntress-- these are not figures of no importance in the history of superheroes, nor are they necessarily (contra Robbins) figures overshadowed by their male compeers.  It's a shame that the scripters of the PBS doc couldn't figure out some way to address their relative importance, whether or not they'd appeared in big-screen films or not.

In my next essay I'll offer some thoughts as to why the most important female characters of the Silver and Bronze Ages were so "team-centric."
Posted by Gene Phillips at 5:18 PM