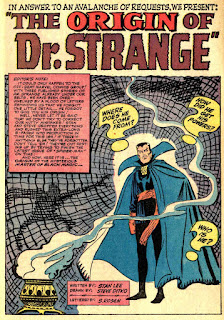 "I must be the best--the greatest! Or else--nothing!"

Whenever the origin of Doctor Strange is retold, most raconteurs emphasize how the master of the mystic arts "gets religion," so to speak. What's often overlooked in the character's setup is the fact that the sorcerer's early selfishness is the factor that leads him to greatness, albeit of a self-sacrificing kind.

The story begins in media res, with a scraggly looking fellow confronting an Asian mystic with his importunate demands, but it quickly moves into flashback territory: 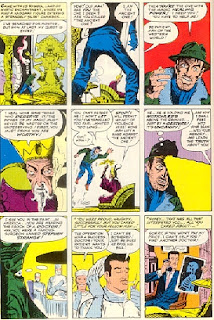 A car accident strips the arrogant surgeon Doctor Stephen Strange of his surgical prowess. Given the assertion that surgeons often display a god-complex, this might be construed as an anti-theophany, and Strange himself can't accept being reduced to the level of a mere untalented human being: 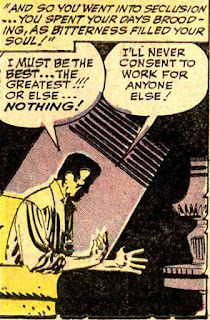 Thus Strange journeys to the temple of the Ancient One in India, not to lose his ego like most pilgrims, but to buttress his ego by uncovering the secret of the mystic's legendary "healing power." The Ancient One refuses to give him any handouts, but seems interested in the brash westerner, at which point a snowstorm springs up out of nowhere and forces Strange to remain in the temple until he can travel again. He's introduced to the temple's only other resident, Mordo, whom regular readers of the feature knew to be one of Strange's future enemies. Stuck in the company of two men who believe in the mystic arts, and thus refute the dominant worldview of Strange's western world, the doctor soon finds himself involved in a struggle between good and evil.

Mordo, instead of simply killing Strange, places a spell on Strange to keep him from telling the Ancient One about Mordo's perfidy. Mordo taunts the former physician, calling him "the witless blunderer from the far western continent," and telling the Ancient One to "send [Strange] back to the new world." For his part, Strange has become protective of the old mystic and even fears what Mordo may do if his power is unleashed upon the world-- yet his altruism is somewhat mitigated by his animus toward the arrogant mystic: ""Never have I hated anyone so much!" Strange finally figures out how to perform an end run around the stipulations of Mordo's spell, by selflessly asking for the Ancient One to train him in the arts of magic-- which is naturally just what the Ancient One is waiting for. 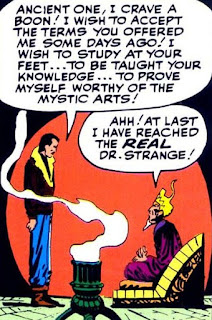 Prior to DOCTOR STRANGE there had been many superheroes who got their powers from Indian or Tibetan lore. Yet Strange seems to be one of the first, if not the first, to explore the ethos of magic, even though it seems unlikely that either Lee or Ditko researched Asian mysticism to any great extent. There's some irony that prior to becoming a selfless sorcerer, Doctor Strange expouses a sort of egoistic exceptionalism with a nodding resemblance to the doctrines of Ayn Rand-- with which Steve Ditko would later become more than a little occupied. As far as the origin-story goes, the western world is largely associated with greed and the eastern with wisdom and enlightenment. Thus Strange, though an American himself, effectively turns his back on many if not all of the ethical priorities of his people, in contrast to such "typical American" Marvel heroes like Peter Parker and Tony Stark-- who, despite the difference in their social attainments, are both strongly oriented around the ethos of "making a buck."

Interesting, though in the first few episodes of the DOCTOR STRANGE series, Ditko sometimes draws the hero with ambivalent features, as if to suggest that he might possess the distinct epicanthic fold of an Asian. 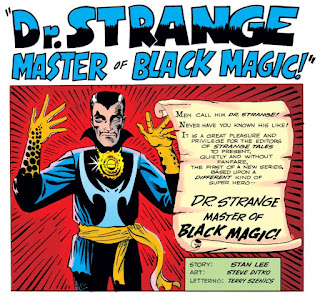 Yet Mordo, who calls Strange a westerner, is not given an Asian appearance. Much later, Marvel raconteurs will cite his ethnic background as Transylvanian, and though neither Lee nor Ditko ever comments on Mordo's provenance, it seems likely that Mordo-- styled a "baron" in his first appearance in STRANGE TALES #111-- was conceived as some form of East European villain. Thus beneath the overt metaphysical content of the series, one may descry a minor sociological myth as well: in which the power of the exotic East is coveted by representatives of both "the new world" and Old Europe, incarnated by a part of Europe that some writers, not least Bram Stoker, considered alien to the Europe of more western climes.

Posted by Gene Phillips at 2:59 PM