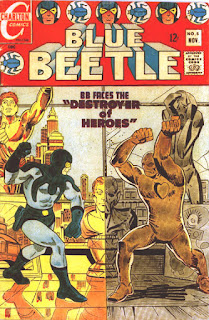 A few years back I did an overview on all of the Charlton BLUE BEETLE stories created by Steve Ditko for the fan-magazine CHARLTON SPOTLIGHT #5, which one can order here. While all of these stories were of interest with regard to Ditko history, only issue #5-- whose full title is closer to "Blue Beetle Faces the Destroyer of Heroes"-- meets my criteria for being a "mythcomic." Specifically, "Destroyer" is a sociological myth, in that it's devoted to Ditko's attempt to analyze humanity's social contract in terms of his Objectivist philosophy.  "Destroyer" has the distinction of being one of the first comic book stories devoted more to the elucidation of a philosophy than to the more basic "good vs. evil" scenario, even if Ditko's philosophy has its problematic aspects.

As I did with my essay on FANTASTIC FOUR #13, I'm going to recycle parts of the SPOTLIGHT essay for this "mythcomics" series, albeit not without some contemporary tweaks and expansion.

I should note first that "Destroyer" is so focused upon its polemic that a contemporary reader who'd never read the BLUE BEETLE title before would just barely get any sense of the hero's identity or raison d'etre, and might not perceive that the story's guest-star Vic Sage was actually the star of BLUE BEETLE's back-up strip-- not up for discussion in this essay-- and that this may go down in history as one of the world's most low-key crossovers of all time.  The more mythic aspect of "Destroyer," though, is that it opposes its blue-clad superhero to-- the Menace of Modern Art!


On a visit to a museum with [girl Friday] Tracey, Kord [aka the Blue Beetle] listens impatiently to a snotty art-critic extolling the virtues of all modern art “symbolizing man’s inability to solve or control the illusion we call existence.”  Kord and Tracey dislike this critical cant, and so does radio-announcer Vic Sage, who is the secret ID of the Beetle’s backup strip, the Question.   Although Sage appears in the Beetle story, and certain elements of that story appear in the Question backup, neither of the costumed heroes appears in the other hero’s story, making it appear as if Ditko were determined to frustrate fannish expectations of the usual costumed-hero crossover.   Certainly the “meeting of heroes” is less important to Ditko than the theme of this story, in which Ditko examines what heroism is.

The anti-heroic stance of the art-critic has its admirers: a bunch of scruffy beatniks who patently favor the idea that man is incapable of meaningful action because they themselves are lazy no-goods.   In particular, one beatnik named Hugo, himself an artist, identifies with the centerpiece of the modern-art exhibit, a lumpy, ill-proportioned human figure titled “Our Man.”  One presumes that the name signifies for Ditko the evils of collectivism, of failing to be a self-sufficient individual.   Tracey, Kord and Sage all turn their backs on the self-conscious hideousness of modern art and its demeaning message regarding human achievement, and move to the part of the museum which displays proper art: dominantly, heroic Greek sculpture, incarnating man’s ability to achieve great goals. 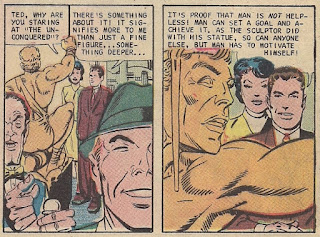 Predictably, the beats abhor “this pretty stuff,” and Hugo makes an abortive attempt to destroy one of the statues, because “anything that shows [man] being better than he really is—is evil!”   Hugo then becomes obsessed with the “Our Man” statue, goes home to his own art-studio (naturally filled with grotesques), and constructs for himself an armored costume based on the “Our Man” image, in which he will attempt again to destroy the life-affirming art.

Unlike most super-villains, Hugo cares nothing about looting banks or conquering the world.   He is in essence a reverse-image of the hero, single-mindedly dedicated to overthrowing what he perceives as “evil.”   This is not to say that Ditko approves of Hugo. For Ditko the beatnik’s belief in the purposelessness of life proceeds from a failure of nerve and an acceptance of mediocrity. Even so, these are comparatively “idealistic” motives compared to the common venality of most Ditko villains.

Kord, having briefly skirmished with Hugo when the beatnik tried to destroy a statue, intuits that the museum will be in danger that night. The Beetle happens across “Our Man” and fights him. The villain’s armor gives him a slight edge, but he’s still forced to flee to the neighboring park, where he comes across another heroic statue, and tries to destroy it.   The Beetle thwarts him again, though Hugo escapes.  But now his act of attempted destruction has been witnessed by his beatnik buddies, who immediately turn the grotesque vandal into their personal hero.  This clash of fundamental principles represented by hero and villain sparks a citywide debate on the virtues of life-affirmation versus life-denial.   Ditko certainly loads the dice toward his viewpoint, making most of the pessimists sound rather stupid, and at least one comment—“I dig a guy that makes mistakes; you know he’s human”—sounds like a dig at Marvel’s conception of “heroes with feet of clay.” 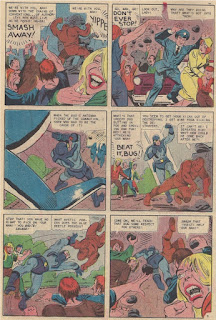 One final time Our Man appears, making another attempt on the museum.   Vic Sage is on the scene and makes an attempt to stop Hugo even before the Beetle arrives; later, when the Beetle is battling Our Man, Sage prevents a demented beatnik from shooting the Beetle (which is the closest one gets to a “teamup” here).   Our Man’s lack of belief in achievement works against him, for he quickly loses heart against the hero’s dogged opposition.    Only the gunfire from the beatnik saves Hugo’s hide, allowing him to escape once more, and this time he divests himself of the armor and leaves it behind.   It’s surprising on one level that Ditko allows Hugo to escape justice. But this was probably for the purpose of having one last laugh on the decadent beats, for they find the armor and fetishize it, looking forward to the day when Our Man will return to lead them.   Hugo, for his part, privately swears that he will never reclaim the armor, and the issue ends with what might be called a re-affirmation of affirmation.


In comparison to many similar Objectivist tracts in the Ditko oeuvre, the artist displays genuine imagination in his symbolic representation of collectivism, pessimism, and life-denial. I said in this essay that Ditko was one of the first three artists I think of who was guilty of letting his didactic tendencies overwhelm his art, but "Destroyer" is not one of those cases. While I doubt that many people would want to actually live in a world governed by Ditko's super-righteous Objectivist principles, the artist does strike a chord when he champions the desire to excel over the tendency toward mediocrity. At the same time "Our Man" remains one of the best villains Ditko ever created sans collaborators, precisely because even though Hugo is dominated by Nietzsche's "will to nothingness," even a negative form of will throws light on what Ditko considers will's positive form. Most of the Beetle's villains are simply unabashed self-seekers, but Hugo is a believer, devoted to his obsessive pessimism.

I would also note that the author's determination to create an "opposite number" for his heroic protagonist, much as Dave Sim did with his villain Cirin speaks to what I have called "the ethic of the combative." I won't attempt to summarize the full argument of the two ETHIC essays, seen here and here, but I will reprint a selected section of the concluding paragraph as an attempt to draw some possibly useful parallels.

The shaman deriving power from his numinous presences, the warrior gaining supernatural presents or guidance from his patron god, the bondsman studying the ways of the mortal lord in order to overthrow him-- all of these participate in the ethical dimensions of the combative mode.  Thus "might" exists to continually challenge others to partake of its nature...This potency, to challenge one's own will to greater acts of agency, is the essence of the ethic that springs from the combative mode.