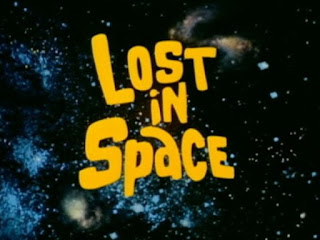 I've now completed my survey of the 1965-68 teleseries LOST IN SPACE, in order to determine whether or not this clearly marvelous-metaphenomenal series should be judged as belonging to the combative mode, and therefore as belonging to the category of "the superhero idiom." I've addressed this topic in various essays but the essay most relevant to this investigation is 2012's CHALLENGE OF THE SUPER-IDIOM LIST.  Though this piece concentrated primarily on how to make determinations as to a given work's "Fryean mythos," it was in this essay that I put forth the "51 percent rule,"which I'd formulated earlier in order to suss out what serial works belonged to the superhero idiom by virtue of being dominantly both metaphenomenal and combative. Here's what I wrote about the rule in CHALLENGE:

I term my solution to this problem the "51 Per Cent Solution."  In business dealings we're accustomed to hearing that a stockholder with 51% of a company's stocks has the greatest advantage, though not an unqualified dominion.  Thus, if one wished to determine the dominant mythos of the Briefer work, one would count up the total number of stories and determine which mythos-type was statistically dominant.  Only an unqualified 50/50 split between mythoi would make such a determination useless, but the paucity of these exceptions proves the rule: most creators start with a given mythos, make only token shifts to other mythoi, usually proving "loyal" to a particular emotional *dynamis.*

In 2015 I decided that the 51 percent rule, modeled on my perceptions of economic patterns, needed to be supplemented by a corollary principle, described in ACTIVE SHARE, PASSIVE SHARE:

Yet as I played around with the rule in the provisional "super-idiom list" that I mentioned in the first "51 percent" essay, I realized that even some characters who didn't satisfy the "51 percent rule" seemed important to the list... [so] I could and did do a statistical survey on another Old West hero: the Rawhide Kid of Marvel Comics, the company descended from the publisher who did "Ringo Kid" in the 1950s. When I counted the number of Rawhide's purely isophenomenal adventures, and compared them with those in which he'd enjoyed encounters with metaphenomenal entities, the latter worked out to about eight percent of the total stories. So, by the "51 percent rule," Rawhide could not belong to "the superhero idiom" any more than could the Ringo Kid. And yet, it's evident that for a time, the Kid's creators Lee and Kirby were making a significant attempt to place their combative cowpoke into superhero situations. 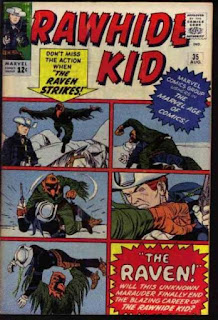 Thanks to a little more research, I evolved my corollary principle:

...from the strict view of the "51 percent rule," both Ringo and Rawhide are "minority shareholders" in the realm of the metaphenomenal. However, to extend the above distinction into the realm of literature, Ringo Kid's adventures display only a "minority passive interest" in matters metaphenomenal, while Rawhide Kid's display a "minority active interest"-- that is, Rawhide's encounters with metaphenomenal presences remain a vital part of his mythos, even if they're not numerically superior to all the naturalistic exploits.

So the "Marvel" serial character The Ringo Kid does not belong to the category of the superhero idiom because he satisfies the combative qualification but does not satisfy the qualification of the necessary phenomenality. LOST IN SPACE was my first attempt to evaluate a serial work in terms that was clearly metaphenomenal but was more "ambivalent" in terms of its combative elements. I posed the question thusly in the first LIS-survey essay:

...on what occasions is it possible for a given series to achieve the combative mode, less because of an emphasis on the continual encounter of megadynamic forces than because of an emphasis upon the outward *form* of such an encounter?...By way of exploring this "outward form" possibility further, I'm going to devote a series of posts to a television series whose status with regard to the combative mode has always been dubious to me.


"Outward form" was a clumsy way of saying that the work under investigation reproduced the form of some pattern that had been articulated frequently enough to become a literary archetype. My example in that essay, the Spectre of the Golden Age, conforms to the archetype of the "metaphenomenal combative" even though he spends an awful lot of time taking on enemies who can't really fight him, and only occasionally vying against entities of comparable power. So the Spectre would be an example of an "active share" type of character-- not in terms of his pheomenality, which is clearly marvelous-- but in terms of the rarity of his truly megadynamic encounters. Mundane gangsters are thus a lower manifestation of the general evil that the Spectre fights. 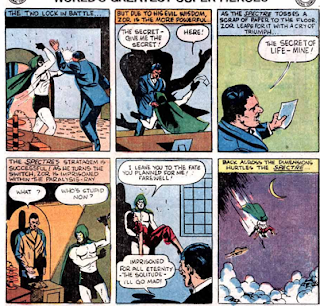 Now, I've defined the LOST IN SPACE characters as demiheroes in this essay, but characters belonging to that persona can belong to the category of the superhero idiom as easily as the other three personas of hero, villain, and monster. It's easy to determine a demihero's status with respect to the combative mode when he gets into fights all the time, like the one examined here.

From 1965 to 1968 LOST IN SPACE portrayed an ensemble of eight regular spacefaring characters: John Robinson and his wife Maureen, their children Will, Judy, and Penny, ship's navigator Don West, the cowardly stowaway Doctor Smith, and the ship's robot, known only as "the Robot." Doctor Smith had no combative abilities whatever, and Maureen and her three kids sometimes wielded guns but were never seen doing much of anything. As for Don West, he acted like a tough guy and could clearly handle a gun, but he was always played as "the sidekick who gets knocked out to make the main character look good." Ship's captain John Robinson-- played by the same actor who had played Zorro in a 1957-59 teleseries-- was the only human character who showed megadynamic power in his battle with aliens and androids. However, the Robot became something of an "ace in the hole" for the space travelers, and often used his superior technological arsenal against enemies too tough to be taken down by a human wielding a ray-gun (or a sword). Since the Robot soon evolved from a simple resource into a full-fledged (if cornball) character, I have no problem in judging him to be part of the ensemble, and thus the automaton and the ship's captain are the only "megadynamic" presences who starred in the series.

Since 19 episodes out of the total of 83 were combative, this means that 23% of the show's episodes featured megadynamic forces in contention. In my analysis of Marvel's RAWHIDE KID stories from 1960 to 1973, I found that only about seven percent of that character's stories were metaphenomenal, but I still judged that the *WAY* they were employed gave Rawhide a "minority active interest" in that phenomenality. 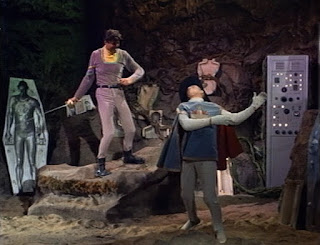 However, once one is below the 50th percentile, the quantity does not matter with respect to judging either phenomenal or combative elements. I judged that the Rawhide Kid saga showed a repeated intent to associate the hero with metaphenomenal elements, and that these became a vital part of his mythos. John Robinson and the Robot sometimes accomplish superhero-like feats-- Robinson sword-demifighting his way through an army of androids in "Space Destructors," or the Robot defeating a universe-conquering "robotoid" in "The War of the Robots"-- but these seem to be anomalies in the "mythos" of this series. (NOTE: in this and in ACTIVE SHARE PASSIVE SHARE, I'm using the word "mythos" in a general, non-Fryean sense.) 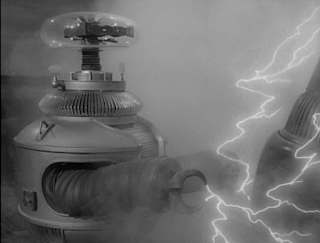 Some stories are resolved by overt peacemaking between factions who just need to know each other better, as in "The Sky is Falling." There are also enemies who display megadynamic powers and use those powers to menace the Robinson party, as in "Kidnapped in Space," wherein the group is attacked by androids serving a super-computer. However, in that story a combative conclusion is put aside in favor of another negotiation. Sometimes enemies are persuaded to abandon their hostile intentions, as with the Junkman of "Junkyard of Space," and sometimes villains who are utterly intransigent are destroyed by chance rather than pitched combat, as when Doctor Smith accidentally blows up the nasty alien in "The Golden Man." And as I covered in the survey, there are many stories in which some functional violence occurs at a narrative's end, but none of the spectacle one needs to create megadynamic conflict.

Thus I conclude that despite the presence of a few "superhero-like" adventures within the mythos of LOST IN SPACE, the dominant ethos is directed away from combative resolutions, in contrast to the serial's contemporary competitor STAR TREK, which talked a lot about peace and understanding but took a lot of pleasure in the spectacle of fight-scenes. For this reason LOST IN SPACE possesses only a "minority passive share" in the category of the combative, and so does not belong to the larger category of the superhero idiom.
Posted by Gene Phillips at 5:22 PM