Since writing the conclusion to EXPENDITURE ACCOUNTS PT. 2, I've decided that it might be simpler to illustrate my point about the distinctions between "glory" and "persistence" with another pair of hero/demihero examples.

This essay was somewhat informed by consideration of the notion of character-types introduced in Vladimir Propp's MORPHOLOGY OF THE FOLKTALE, of which I wrote:

What Propp's paradigm [of the "seeker"type of folklore-protagonist and the "victimized hero"] describes is essentially a difference between "heroism in activity" versus "heroism in passivity." "Heroism" in this context must be divorced from the nature of any particular hero: in folklore studies it connotes simply the actions (or non-actions) of the characters with whom the audience is supposed to sympathize. The same parallel obtains with characters who dominantly represent the forces of chaos, with villains representing a very active form of evil, while monsters tend toward greater passivity (dragons who are minding their own business guarding their hoards when knights come calling, and so on.)

Propp's characterization of the latter protagonist-type, the "victimized hero," puts me in mind of a particular type of hero-type which seems, on the face of things, to conform to the paradigm: the castaway-protagonist, who, either alone or as part of a group, is stranded in some unfamiliar locale or environment.  At first glance one might assume all castaway-types to be passive and victimized figures, given that they are generally focused purely on survival and, where possible, finding a way back to familiar territory.  One might inquire as to whether the castaway's efforts to find his way home do not make him the sort of "seeker" Propp writes about in his first category.  Again, in my reading of Propp, the actions of a seeker imply a much more active status than the usual castaway-type-- though there are, as I will show, exceptions to that generalization.

The values of "persistence" and "survival" are strongly encoded in the 1965-68 teleseries LOST IN SPACE, whose family of space-castaways take their name from the novel SWISS FAMILY ROBINSON.  The Robinsons' original mission is one of space-exploration, which again might be read as a sort of "seeking," though not one that necessarily carries the value of "glory."  The characters' spaceship is thrown off course, and for the remainder of the series they follow the standard pattern of castaway-fiction, alternating between attempts to survive and attempts to find a way home. 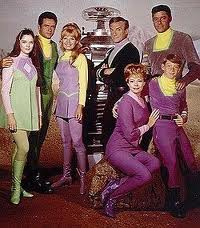 Many episodes-- possibly a majority-- involve some violent conflict between the Robinsons and various aliens who menace them for assorted reasons.  The explorers command a limited number of space-age weapons.  These register as having high dynamicity-- even though said weapons usually prove ineffective-- and their artificial cast-member the Robot also commands a fair amount of power, as well.  In keeping with my observations on the nature of the combative mode, this opposition of superlative forces does imbue the series with the narrative value of the combative, in that combative conflicts do take place. However, the significant value is not satsisfied, in that the conflicts do not dominate the theme of the narrative, as they do in a comparable series like STAR TREK.

Despite the family's original purpose of space-exploration, the majority of the castaways-- mother Maureen Robinson, children Judy, Penny, and Will, and the cowardly stowaway Doctor Sniith-- are presented as being far from inclined to fight under most circumstances.  Only two of the male protagonists-- "alpha male" John Robinson and "beta male" Major Don West-- show much competence in the combat department, and even then, Major West only rarely shines as being more than just a "good" fighter.  John Robinson-- played by Guy Williams, the former TV "Zorro"-- is more frequently positioned as an above-average combatant, occasionally even displaying Zorro-style swordfighting skills. 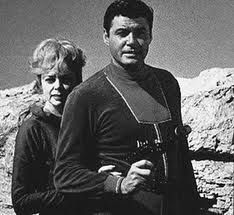 Though the Robinsons are potrayed as being willing to go to the wall to save persecuted or put-upon victims from aggressors, they only do so as a last resort, which makes them very different from the concept of the hero as a more active defender of right.  For this reason I find that the tenor of the Space Family Robinson's adventures is concerned with "persistence" first and "glory" second if at all.

But as I indicated above, not all castaway-series necessarily follow this pattern.  Consider in contrast another teleseries, the 1999-2002 "Sir Arthur Conan Doyle's The Lost World." 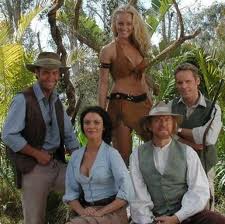 For simplicity's sake I'll pass over any analysis of the original Arthur Conan Doyle novel, which was a novel of exploration but did not involve any castaway-themes, as well as the various films that purported to adapt the novel.  The syndicated series takes only a few elements from the novel, such as the names of several characters in the party that ends up stranded within the "lost world," a plateau in South America where prehistoric creatures and quasi-human tribes still exist.

On the surface, the "Lost World" party was concerned with the same contingencies as the Robinson party, surviving amidst abnormal dangers and searching for a way back to the real world.  However, from the first, the value of "glory" is emphasized, even in the voice-over to the series' introductory theme:

“At the dawn of the last century, a band of explorers searched for a prehistoric world, driven by ambition, secret desires, a thirst for adventure, and seeking the ultimate story..."

These four thumbnail motivations were meant to suggest respectively the four dominant (and most combat-worthy) members of the original party: Sir John Challenger, Marguerite Krux, Lord John Roxton, and Ned Malone.  The theme also references the "late addition" of the fifth character, Veronica the jungle-girl, introduced as "an untamed beauty."  Veronica was transparently modeled on such jungle-heroes as Tarzan and Sheena, and unlike the others, is eventually given an official status as a mystical protector of the plateau-world.

However, even without focusing on the function of Veronica, the Challenger party don't act as the Robinsons do, simply trying to mind their own business and survive.  Over their three seasons all of them (with the exception of noncombatant character Summerlee, who's killed off in Season One) become de facto "policemen" to the plateau, constantly intervening to sort out good from evil.  Admittedly none of the other regular characters verbally expouse the sort of "mission" that Veronica does.  Still, their various reasons for coming to the plateau all suggest the desire to be magnified in some way.  Since the aim of the LOST WORLD series is to be as exciting as possible-- rather than emphasizing the melodramatic persuasions of LOST IN SPACE-- all five of the heroes are constantly engaging in combative activities, and are seen, more often than not, enjoying the "glory" of martial triumph.