Synchronicity strikes thrice. On August 30 of this year, two comics professionals, best known for  their Silver and Bronze Age works, passed away. Both had endured lingering health problems (a stroke for Marie Severin, Parkinson's for Gary Friedrich).

An additional odd "meaningful coincidence:" Severin and Friedrich had briefly collaborated, principally (if not exclusively) on Marvel's INCREDIBLE HULK feature right around the time that it shifted from the "split-book" TALES TO ASTONISH to its own title, which has continued in one form or another since then.

A third coincidence meaningful only to me: just yesterday, an anonymous commenter on my blog called my attention to an error in this essay, wherein I'd written about a run of SUB-MARINER comics (#9-13, not long after Subby departed the title he'd formerly shared with the Green Goliath). The commenter pointed out that I'd credited John Buscema with the pencil-art on that sequence of stories, when said art was actually produced for two issues by Gene Colan and three by-- Marie Severin.

And finally, though it's in no way a coincidence, my personal acquaintance with the Hulk in his own feature started with that period in which Severin and Friedrich briefly collaborated.

Technically, the last issue of TALES TO ASTONISH, before it was re-titled THE INCREDIBLE HULK, was a collaboration by Severin-- who had already done assorted earlier stories-- and Stan Lee. TALES TO ASTONISH #101 was the first part of a two-part story, and the first part was scribed by Stan Lee, who hurled the bellicose behemoth into the fantasy-otherworld of Thor's Asgard.

So this was my first exposure to the Hulk in his own series, beginning with a killer scene wherein the monster-hero thrashes Heimdall, guardian of Asgard's Rainbow Bridge.

Gary Friedrich picked up scripting-duties for the second part of the mini-epic, which, among other things, involved Bruce Banner being saved from death by two of Marvel's dastardly demigods, the Enchantress and the Executioner. 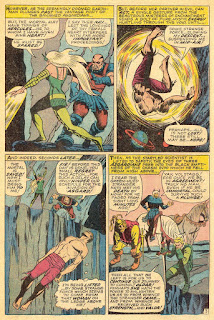 The Enchantress actually strikes the Hulk dead in this issue, but Odin conveniently brings the monster back to life and sends him home. The sorceress meets the Hulk in numerous stories later on, but she never seems to remember that handy instant-death spell. But I digress.

In HULK #104, Friedrich and Severin collaborated on a kickass battle between Old Jade-Jaws and Spider-Man's foe, the Rhino. The story ends with the villain's apparent death, which I found very impressive at the time. Naturally, the Rhino got better as soon as some writer needed him. 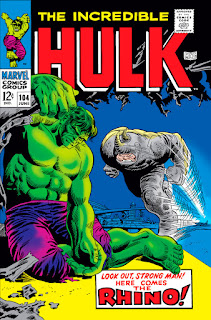 Finally, Severin bid farewell to the feature. at least for several years, in TALES TO ASTONISH #107-108.  This two-part tale pitted Old Greenskin against Iron Man's villain, the Mandarin. Friedrich again wrote, though Severin contributed only layouts for a penciller who would soon become dominantly associated with the Hulk: Herb Trimpe. Here's a panel in which the monster saves Nick Fury from the villain, not so much out of a desire to benefit Fury as to thwart Mandarin. 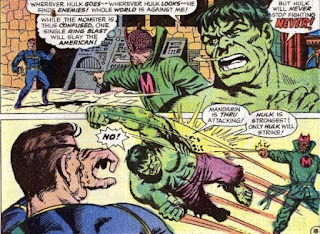 Today I can't say the Friedrich-Severin HULK stories are any sort of pinnacle in the history of the character. Still, even aside from these issues being my quasi-introduction to the character, I still think they're better-than-average formula entertainment. I'm not even claiming they're the only times the two professionals crossed paths, but these stories were probably the most meaningful to me.
Posted by Gene Phillips at 4:32 PM

This is the first I have heard of their passing. It takes me back to the late 1960s when Marvel did what I think is their best work. My earliest memory of Gary Friedrich was his writing on Sgt. Fury. For Marie Severin it was her coloring. When she began contributing as a pencil artist (and sometimes inks?), I enjoyed her quirky style. I actually have the original art for an 11-page Dr. Strange story that she drew. I never met her, but I will miss her.
--Thomas Miller