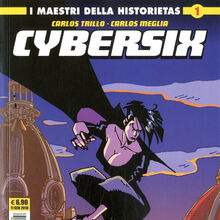 In terms of visual tropes, the character of Cybersix—created in 1993 by two Argentinians, artist Carlos Meglia and writer Carlos Trillo—appears to be composed of pop-culture quotations. The heroine wears a slouch hat (The Shadow), leaps about a city’s rooftops while wearing a really long cape (Batman) and high heels (Batgirl) and maintains a civilian identity in part by obscuring her face with glasses (Superman). To be sure, none of these characters concealed their identities through cross-dressing, and the grotesque cityscape drawn by Meglia makes Gotham City look like a playpen. Yet, more importantly, Meglia and Trillo are also oriented on making their genetically-engineered character into a meditation on the nature of identity.

The Cybersix origin story—not officially translated into English, but available on the Net in fan-renditions—sets up the character less as a standard hero than as an often pathetic (albeit smoking hot) monster. When Cybersix initially begins patrolling the vaguely European city of Meridiana, she’s not seeking criminals to bring to justice; she’s seeking victims to prey upon, just to stay alive. Though her monstrous nature is not in any way her fault, she’s haunted by a sense of anomie from the sphere of normal life. 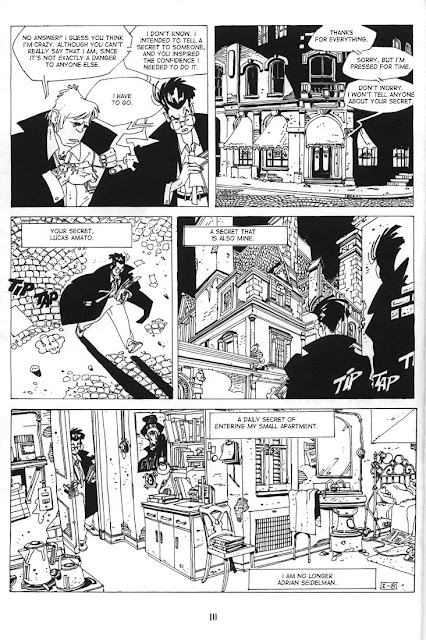 The character is first seen in her “Clark Kent” persona, that of Adrian Seidelman, a male teacher of literature at a Meridiana high school. Though her femininity is concealed behind glasses and beneath bulky men’s clothes, even her hidden charms attract the attention of a randy teenage girl, and this predicament in turn leads to Adrian being hassled by some of the teen girl’s classmates. Adrian is then “saved” by fellow teacher Lucas Amato, whose build is as big and beefy as Adrian’s is slight and unthreatening. Because of her singular nature, Adrian/Cybersix has no friends. But Lucas happens to need a confidante, and he bends Adrian’s ear about his new discovery—which just happens to be the rumored existence of a weird woman in black leaping around the rooftops of Meridiana. Though Lucas is employed at the school as a biology teacher, Lucas also has a “double identity,” since he became a teacher in lieu of his true passion, journalism. After much dancing-around about who and what Cybersix is, she finally divulges at least part of her story to Lucas, much as Superman disclosed part of his history to Lois Lane.

The proto-heroine owes her genesis to ex-Nazi mad scientist Von Reichter, who perhaps ended up in Meridiana after deciding that a hideout in Argentina was just too cliché. Whereas the Nazis of the Third Reich sought to convince ordinary men that they were supermen, Von Reichter decided to make his own super-beings via genetic manipulation. In addition, the scientist designed his artificial “children” to blend in with established society in order to slowly build power for himself. But some of his projects proved less successful than others. He destroyed an entire group of experimental servants, the “Cyber” line, because they weren’t obedient enough to suit him, and later bred a more servile group, sometimes called “Technos.” Of the original Cyber line, only the female designated Cybersix survived, thanks to the intervention of one of Von Reichter’s human servants—not coincidentally, an African Black, who becomes Cybersix’s surrogate father. To further complicate her survival, all of Von Reichter’s creations can only endure if they get regular doses of a serum called “sustenance.” Cybersix’s father steals a supply of sustenance that lasts through her childhood, though eventually she has to find a new source. 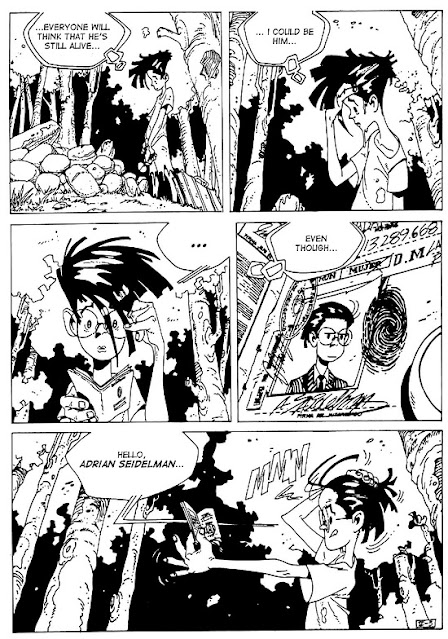 Like Superman before her, Cybersix conceals the part of the backstory in which she gets a double identity. Even in her youth she realizes she must journey to Meridiana and harvest sustenance from her Techno “brethren,” but that she cannot enter the city without identification. She chances across a wrecked car in which a father, mother and male youth have all perished, so young Cybersix poses as the slain boy Adrian Seidelman.

The imposture proves successful enough that Adrian establishes her credentials in the city. However, on the first night that she seeks to plunder a Techno for sustenance—which she takes, orally but non-fatally, in approved vampire fashion—Cybersix realizes that sooner or later she’ll compromise her cherished civilian identity. Because this particular Techno works in the capacity of a prostitute, Cybersix raids the hooker’s closet, stealing all the accoutrements she will use in her night-stalking persona: the hat, the long cape and dark bodysuit, and the high heels. Indeed, at one point in the story Cybersix flashes back on posing as an actual prostitute in order to lure other Technos into her web, so that she can harvest them. Whereas a real prostitute trades sex for money, Cybersix vamps her victims for a one-way transaction—though one could argue that she’s stealing back the life her “Bad Father” would have denied her.

What keeps Cybersix from being an unregenerate monster is that she does have a conscience. At one point in her conversation with Lucas on a rooftop, one of Von Reichter’s assassins tracks the heroine down. The two super-powered warriors fight, and the assassin almost goes over the side of the building. Lucas persuades Cybersix to spare the pawn’s life, and she pulls the killer to safety. The killer attacks again and plunges off the building to his death. Cybersix treats the incident with dark humor-- “Now I’ll go to heaven”—but her sardonicism does not distract from her need to be more human, particularly in the eyes of Lucas. A romantic connection will inevitably be made between the two of them, though arguably Meglia and Trillo are primarily concerned in using romance to give Cybersix the human dimension she lacks. 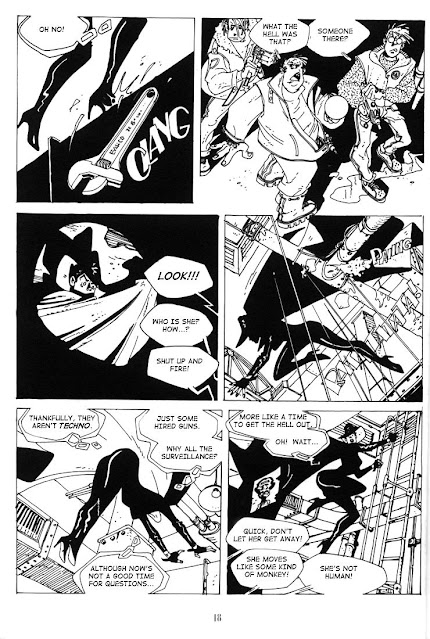 Trillo draws a loose parallel between Cybersix and real-life Portuguese poet Fernando Pessoa, who sustained four separate authorial identities. In the origin story, Cybersix defines herself by only two personas: the daytime life of Adrian and the nocturnal existence of the sustenance-sucking vampire/prostitute. Her creator defined her as a third identity, that of a failed experiment, even if she turned out to be a Frankenstein’s monster set to destroy her creator’s livelihood. But by the end of “A Piece of Night,” Cybersix has taken a step toward a fourth identity: that of becoming a city-patrolling hero after the examples of Batman and the Shadow. I’ve not read more than the origin tale, but I would still hazard that her struggle to embody heroism took many more unexpected turns than the careers of most American crimefighters.

Posted by Gene Phillips at 4:20 PM

I doubt it, though I only have a handful of online scans to judge by. Breast binding would be a likely solution, though the only character I've seen do that a lot is Ryunosuke from URUSEI YATSURA. Yet I can't count how many times I've seen Chinese movie-heroines wander around posing as men, with absolutely no attempt to conceal their feminine assets.