CREATED AND CREATOR ENSEMBLED HE THEM

Because one of my forthcoming "persona-essays" deals with the monstrous creation of Mary Shelley, I want to set down some thoughts about how characters in the tradition of Shelley's "mad doctor" may or may not enter into ensemble-relationships with their unholy offspring.

Just as some heroes evolve from characters who begin with villainous status, monsters sometimes evolve from the persona of a demihero.  I've termed the Henry Pym of the 1962 "Man in the Ant Hill" a demihero.  Given that he starts out as what I called a "Frankenstein  manqué," it would be easy to imagine the early Pym transforming himself into an ant-monster rather than a shrunken man, rather like this other monsterized scientist-character from another Marvel boogey-tale of the period:

Much later, long after Pym became a full-fledged superhero, writer Roy Thomas referenced that lost Frankensteinian theme, and had Pym/Goliath invent a murderous mechanical offspring, originally called "Ultron-5," who despite his similarity to Shelley's monster was framed as a "villain." 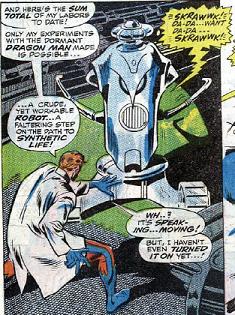 Shelley's original novel FRANKENSTEIN depicts a more complex relationship between the monster and the monster's creator-- and one in which both characters are central to the novel's concerns.  Therefore Victor Frankenstein and the being popularly nicknamed "the Frankenstein Monster"-- although Shelley never gives the latter a real name-- are equally important to the novel's structure, and form an *ensemble* much like that of those discussed here. 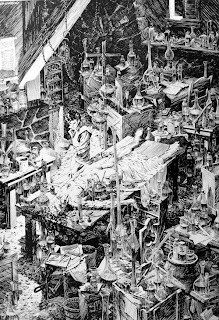 However, the interdependence of "creator and created" is not an inevitable development.  In the case of Robert Louis Stevenson's 1886 novel DOCTOR JEKYLL AND MISTER HYDE, there's the potential for the "two faces of Doctor Jekyll" to be of equal importance, just as Victor and his doppelganger-like creation are in FRANKENSTEIN. 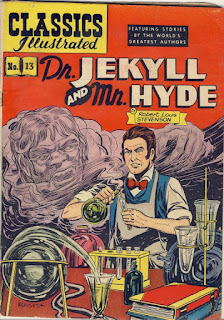 However, in my judgment Jekyll is of secondary importance in the novel.  Stevenson's plot is focused principally upon the revelation of Edward Hyde's true nature, not on the aspects of Jekyll's character that lead to Hyde's creation.  Thus in this example, it is Edward Hyde alone who is the focal presence-- though I have seen renditions of the concept where Jekyll is more important than Hyde.

The reverse of this focus upon "the created" is one in which "the creator" alone is the focus, and his creatures are little more than manifestations of the creator's warped genius.  My example here is H.G. Wells' 1896 novel THE ISLAND OF DOCTOR MOREAU.  Whereas Mister Hyde is an eruption of Doctor Jekyll's primitive self-- a self that takes on a life of its own, one more dynamic than that of its "parent"-- the monstrous Doctor Moreau is the focal presence of the novel, and his assorted creations-- the beast-human hybrids he forges through the unlikely techniques of vivisection-- are just supporting characters. 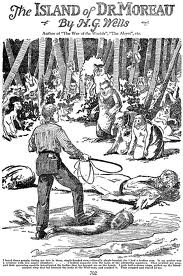 At best, the assorted beast-men of the novel are secondary excrescences of Moreau's twisted genius, not separate ensemble-characters in their own right. Moreau's death ends his hold over the hybrids, who eventually revert to their lower natures, but the narrator Pendrick realizes at one point that he might have regained control over them after the passing of Moreau and his assistant:

I know now the folly of my cowardice. Had I kept my courage up to the level of the dawn, had I not allowed it to ebb away in solitary thought, I might have grasped the vacant sceptre of Moreau and ruled over the Beast People.


I've now demonstrated that the co-existence of a "creator" and his "creature" in a narrative does not necessarily mean co-equal status as focal presences. I will further note that these figures are also mutable in terms of their persona-status.  Shelley's Victor Frankenstein, Stevenson's Doctor Jekyll, and the two Marvel characters discussed-- the original version of Henry Pym and the forgettable guy who transforms himself into "Bruttu"-- are all demiheroes.  As stated earlier the persona of the demihero tends to represent the narrative's "life-sustaining" potential.  That persona can turn negative, though usually not to the same degree as one sees in the persona of "the monster." Of the examples cited, the "monsters" who assume centricity include Shelley's Frankenstein Monster, Stevenson's Mister Hyde, and Bruttu.  In the original Henry Pym story, he is a demihero who does not share centricity with the "monstrous" ants he encounters.

The difference in the degree of negativity, however, makes me label Wells' Doctor Moreau a "monster" rather than a "demihero."  As established in EXPENDITURE ACCOUNTS PART 2, the term that for me best captures the tenor shared by monster and demihero is that of "persistence."  Moreau's function in the story is to be the originator of the ghastly hybrids, and he does so through a persistent dedication to science not unlike that of Victor Frankenstein or Henry Jekyll. However, the negative effects of Moreau's unscrupulousness makes him into more of a monster than any of his creations, who, as I said, are not as significant, as numinal, as the mad doctor.  Thus, Wells' book is one of those works in which "the mad doctor" is far more of a "monster" than his creations, as well as being the most significant monster in the book.

This compare-and-contrast can't examine in depth the treatment of these very mutable figures in the medium of film. However, I must note-- given that an upcoming essay will deal with one filmic version of the Frankenstein tale-- that many Frankenstein stories vary as to whether the creator, the creature or both enjoy centricity.

It's been commented somewhere that in the Universal Frankenstein series, the creature was the central character, while in Hammer's Frankenstein series, the creator was the center. I would certainly agree with the latter statement: most of Hammer-Frankenstein's creations are no better than those of Wells' Doctor Moreau: mere "excrescences."  However, it's not quite that simple with the Universal Frankensteins.  The first three make a rocky effort to follow the example of the book, in which the mad scientist and the monster are of roughly equal importance to the story.  However, the fourth and fifth films in the series diminish the role of the "mad scientist" to nugatory dimensions. And in the last three films in the series-- all of which were "monster-mashes"-- the Frankenstein Monster shares focal space with Dracula, the Wolf Man, and some version of a "mad scientist"-- though none of the scientists belong to the line of Frankenstein.