TO BREAK OR NOT TO BREAK 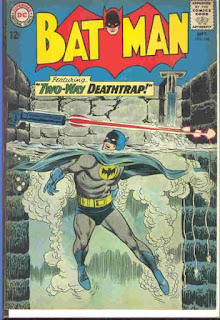 In this 2010 essay I wrote about the way a fantasy-film like THE LITTLE MERMAID followed narrative rules for its fantastic content which were not based in the appearance of logic.

...Disney's THE LITTLE MERMAID is a fantasy-- as well as a fiction-- that is not *essentially* about the appeal of the game's rules. There are what I term *expectations* in the Disney film, but most of the film's "rules"-- that fish can talk, etc.-- are not supported by logic but by *aesthetics.* There is no *reason* that the Disney fish can talk: it's just a given supported by the author's desire to tell a story involving talking fish and the audience's desire to experience one.


Today I wouldn't use the term "aesthetics" to describe the appeal of fantasies, whether they break narrative rules or simply bend them, but the essential point holds true.  No one is likely to demand that LITTLE MERMAID should not portray talking fish because (a) fish can't really talk, or (b) even if they could, they couldn't speak underwater.

Not all issues as to agreement on "givens" will be settled this easily, though.  One film-viewer can go into a tirade on the inconsistencies of a given film, while another can listen to every single objection and merely respond, "It's only a movie."

In the third RULES FOR ESTRANGEMENT essay, I borrowed some terms from the work of philosopher Susanne Langer, describing a narratives like THE LITTLE MERMAID as a "presentational fantasy" while a narrative like the X-MEN comic book was a "discursive fantasy."  However, the question arises: while discursive works usually make more effort to appear logically consistent, are there instances in which some audience-members will give the works a pass, while other watchers will not do so.

In GESTURE AND GESTALT 3  I examined a trope that has been a favorite in BATMAN comic books as well as the 1966-68 teleseries-- that of the villain who places the hero in a deadly trap-- and found that it was impossible to make the trope seem logically consistent:


It should be obvious that there can be no hint of verisimilitude in this trope. While real people have been known to torment other real people for amusement, the notion that nearly every single villain in the Bat-universe would choose to indulge in this trope, rather than a more expedient solution for hero-killing, points up the nature of the device as presentational of a certain absurd-flavored form of suspense.

Audiences who take no pleasure in the trope will be the joykillers in this instance, making the reasonable objection that if the villains want to see the hero die slowly, why don't they hang around and watch? Why do they always leave the room?  And of course the only answer is one that steps outside narrative logic: the villains have to leave or there's no way the hero can demonstrate his cleverness in contriving an ingenious escape.

In all probability there will never be any universal consensus as to when it's proper to give a work a pass.  Therefore I can only state my own preferences.  When I give a story a pass on its strict adherence to discursive logic, it's because I think that doing so achieves a positive effect in some department.  I number four departments in which this positive effect can be achieved: the kinetic, the thematic, the dramatic, and the mythopoeic.  The demonstration of Batman's genius for escaping traps would fall under the heading of the mythopoeic.

In Part 2 I'll examine a film where I was the joykiller and others asserted that the flick should have been given a pass
Posted by Gene Phillips at 1:12 PM