It would almost impossible to consider the question of racial myths in the comics medium without mentioning its "first black superhero," the Black Panther, a.ka. King T'Challa of Wakanda.

As I'm dealing only one specific story. I'm obliged to pass quickly over the character's genesis, except in one context. When the Panther appears in his two-part introductory story in FANTASTIC FOUR #52-53, authors Stan Lee and Jack Kirby are thoroughly upbeat about the African lord's success in importing Western technology into his kingdom of Wakanda. I would guess that Lee and Kirby envisioned Wakanda's advancement to be indicative of the potential of all human races to reach the level of attainment seen in the United States.

Don McGregor, writing his "Panther's Rage" saga" in the post-Vietnam era, took a different point of view. McGregor's initial arc began with T'Challa returning to his "Wakanda wonderland" and finding that an old enemy, calling himself Erik Killmonger, has organized a revolutionary force to usurp the Panther's kingship. For the first time the Wakandan ruler sees that during his absence from his homeland-- during which he devoted himself to the role of superhero amid the Avengers-- his kingdom has fallen into chaos. Although during this series Wakanda remains a fantasy-world, sporting prehistoric monsters and meteors able to change humans into super-menaces, McGregor and his artistic collaborators Billy Graham and Rich Buckler revealed that many of the natives were still traditional tribal Africans, ill at ease with the intrusions of Western devices and culture.

"Panther's Rage" is rambling and episodic, and though it's never boring, its myth-themes are not integrated enough to make me list the entire arc here, as I did with the Pini's ELFQUEST and Jack Kirby's NEW GODS. Instead I've chosen one story, McGregor and Graham's "The God Killer," to represent the saga at its best. 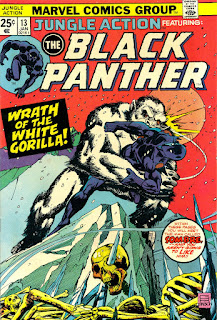 "God Killer" follows an episode in which Killmonger stranded T'Challa in a wintry wasteland, hoping that the Panther would be killed by a pack of wolves. Having overcome the wolf-pack-- and I should note here that most episodes dealt with the Panther proving his mastery over animals by reluctantly slaying a particular beast-- T'Challa trails Killmonger and his retinue. But the hero is blocked by one of the villain's bizarre henchmen-- Sombre, who wears what resembles a traditional African mask over his features, and dresses in priest's robes. Sombre is one of a handful of men whom Killmonger exposed to the aforementioned "super-power meteor," and he's been cultivating a relationship with a band of titanic white gorillas whose very existence T'Challa never suspected. Specificially, Sombre has been feeding the corpses of men who died of meteor-radiation to the gorillas, with the result that he's able to command them to go after a live victim, the Black Panther. The Panther manages to stay clear of the regular-sized gorillas, who stand a mere twelve feet tall, but is forced to fight the largest white ape, who looks to be about twenty feet in height. The Panther manages to kick the giant creature off a ledge, where it's fortuitously impaled by the sharp rib-bone of some long-dead prehistoric creature. The story ends with the Panther meditating on the consequences of his act, though by the next issue he's hot on the trail of Sombre and Killmonger once more. 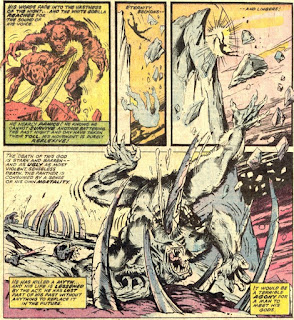 This bare-bones account leaves out a couple of "B-stories"involving the Panther's support-cast, but though these also delve into the trope of "traditional ways threatened by modernity," they're largely unimportant to the "A-story." Though this was the first story in which the white gorillas were shown to be a reality, their image had appeared before in a 1969 AVENGERS story. In this tale writer Roy Thomas posited that the Black Panther's crusade to modernize Wakanda was opposed by another Wakandan, the Man-Ape, whose people worshiped the implicitly imaginary white gorilla and advocated a Wakandan version of an "anarcho-primitivist" stance. Thomas followed Lee and Kirby by unilaterally advocating progress over tradition.

In contrast, McGregor emphasizes that the cult of the white gorilla is as much of a valid religion as T'Challa's veneration of his sacred black panther totem. On one level, the white-gorilla tribe is a continuation of the 20th century boogeyman of the "carnivorous ape" that is best exemplified by the 1933 film KING KONG, and thus it's fitting that T'Challa squares off against one giant ape rather than the whole tribe, even if the king-ape isn't quite as big as Kong. However, McGregor also sees them as figurative gods, simply by virtue of having been the subject of human adulation:

It would be a terrible agony for a man to meet his gods-- especially gods that he never believed in!


Though in a diegetic sense the gorillas are just animals, not gods, the fact that they have been worshiped by human beings-- just as the original Kong was as well-- lifts them above the sphere of the mundane. The death of the king-ape is thus a tragic outcome in the eyes of both McGregor and his viewpoint character:

The Panther is consumed by a sense of his own mortality. He has killed a myth... and his life is lessened by the act. He has lost a part of his past without anything to replace it in the future. It would be a terrible agony for a man to meet his gods. It would be hell if that man had to slay those gods.

McGregor has been criticized, sometimes fairly, for his florid prose, but these lines rate as some of the most cogent sentiments written for a Marvel comic. The writer occasionally evinced a rather touchy-feely attitude toward human relationships, something that might seem at odds with the animal-slaying motif throughout "Panther's Rage." In most jungle-hero narratives-- a tiny number of which concern non-white heroes-- the hero's slaying of jungle-beasts indicates his immediate dominion over his terrain, as well as the more general dominion of humankind-- or alternately, of white humankind-- over the beasts.

In contrast, we have the Black Panther. who is not the first nonwhite jungle hero, but is ineluctably the most mythically significant one, partly but not exclusively because of his race. In the McGregor mythos of the Panther, while the slaying of animals is necessary for survival, the beasts constitute an "other" beside which all human-centered "others" are nominal by comparison. Indeed, in a later episode McGregor describes the Panther's encounter with a particular animal-- one that's not even a literal menace-- as "profoundly alien." Ergo, even though no real gods appear here, the white gorillas incarnate a true "metaphysical myth."

NOTE: I'm aware that apes can and do eat meat, but I wouldn't consider them carnivores since meat-eating is generally an occasional deviation from their vegetarian tendencies.

Posted by Gene Phillips at 5:12 PM