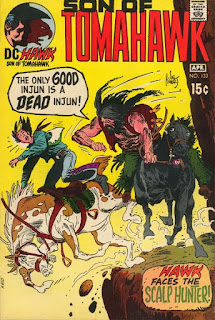 Though Native Americans arguably got no better treatment from the white citizens of early America than did people from Africa and Asia, "Indians" excited the imagination of the European mind, both on the continent and in the U.S. Noble red men-- and sometimes equally noble red women-- appear in great profusion in most of the fiction we deem "westerns." Arguably one might rename the genre 'frontier stories," since many of the stories took place in the Eastern United States-- thus becoming "eastern westerns," as some wit styled them. One such example is DC Comics' original TOMAHAWK series, whose original adventures rarely strayed past Texas.

As this reproduction of the first Tomahawk story shows, Tomahawk's heroic path is thoroughly imbricated with that of the Red Man. Though he's already an adult when he receives tutelage from a kindly Indian tribe, he becomes an expert in woodcraft and even modifies his regular name, Tom Hawk, to one emblematic of Indian culture. In the first story he even has an Indian girlfriend-- Fenimore Cooper would never have approved!-- but I presume that she was never seen again.

However, the idea of white/red intermingling reappeared toward the end of the DC series. During the late 1960s the title was faltering under the aegis of talents like Ed Herron and Fred Ray, so there was an attempt in the last years of editor Murray Boltinoff's reign to give Tomahawk's frontier adventures a more realistic edge. TOMAHAWK #131, which began Joe Kubert's editorship, tried one last-ditch effort to revitalize the title, retitling the feature "Son of Tomahawk" (albeit only on the cover; the indicia-title stayed the same). In this reworking, a young Tomahawk met and married an Indian woman, settled down, and raised a family. Given that the original character's adventures always took place prior to the end of the Revolutionary War-- and given that Tomahawk and his wife were drawn to look like they were in their sixties in SON OF TOMAHAWK-- it would appear that it took a while for the couple to conceive, for "Hawk Son of Tomahawk" was portrayed as a tempestuous young man in his twenties. In any case, for the last ten issues of the title, the stories by Robert Kanigher and Frank Thorne depicted the lives of Hawk, his parents, and his little brother Small Eagle as they found themselves continually embroiled in violent conflict, often involving racial tensions (Hawk looked white while his brother looked Indian, but their community knew them both as "half-breeds.")

Most of the Kanigher-Thorne stories are good frontier adventure, but the story entitled "Scalp Hunter" is their most mythic evocation of the racial theme. Hawk finds himself targeted by a cyclopean enemy known only as "Bounty Hunter." (I suspect that the original intention was to call him "Scalp Hunter," since that's the name he's given on the cover; perhaps someone at DC wanted to soften the impact by changing the name inside the comic.) Hunter is a white man who carries around a "trophy pole" adorned with dozens of Indian scalps, but he's never been convicted for murder because he's claimed self-defense every time. The killer targets Hawk, calling him both "injun" and "half-breed," so the young man attempts to leave to protect his family. Hunter captures Hawk and tells him how he became obsessed with murdering every Indian he could find: an Indian raiding-party killed and scalped the man's family while he was away scouting for land on which they could all settle. The horror of his loss so unhinges the Hunter that after he buries his mutilated relatives, he swears at their gravesite to take enough Indian scalps to stretch from the graves to the top of nearby mountain "Snow Peak." For good measure, Hunter even explains the bear-claw necklace he wears; that he stole it from one of a medicine-man victim even as the Indian warned him that the amulet would bring Hunter bad luck.

Though Hunter has Hawk at his mercy, he decides not to shoot him outright-- "That'd be too easy! You're special!"-- but orders to strip off his shirt, gives Hawk a knife and a headstart, and begins to hunt him down. Hunter also strips down but remains armed with a pistol. Hawk, who's stated earlier that he has no Indian woodcraft, has to learn the hard way how to walk softly in the forest, but it doesn't help. Thus he strikes for high ground, scaling Snow Peak (which just happens to be in the area where Hunter took Hawk prisoner). Eventually Hunter triggers an avalanche to deluge the young hero. However, when the villain tries to claim the buried body-- boasting of the "good luck" his amulet has brought him-- Hawk stops playing possum. In the ensuing fight Hunter almost goes over a cliff but catches himself on the edge. Hawk reflects is tempted to let the killer die: "the weight of the scalps he took-- are draggin' him down!" The young hero reconsiders and tries to pull Hunter up, but Hunter refuses his charity and allows himself to fall: "If you wanna beat me, redskin-- you'll have to follow me plumb tuh hell!" Hawk watches the villain fall, laughing all the way. Then he returns home with a token of his adventure; the bear-claw necklace. When his father asks him if he found out "how much o' you is Indian, " Hawk replies, "as much as this claw is bear."

Between them, Hawk and Hunter form two responses to the mythic tension between white and red races. Hawk, of course, signifies the humanity that binds the races as being essentially identical. Hunter, despite his hatred of Indians, has taken up a life that most white people of the time would have deemed "savage," and thus not far from the life of real Indians. Not only has he taken up the practice of scalping, thus imitating the horror perpetrated by his family's killers, he even emulates an Indian-like ritual by hunting Hawk. Kanigher doesn't try to draw a deep portrait of Hunter's racism or his insanity. However, one may speculate that the only reason the character would consider Hawk "special" is because he Hawk is a product of two races, and so Hawk is a living testament that the separation Hunter cherishes can be abolished. Thus he prefers to die with the belief that if he takes his own life, Hawk has not managed to beat him, while to accept Hawk's charity would be to admit that a red man could best him.

I called Bounty Hunter "cyclopean" earlier, because I think Kanigher and Thorne have modeled him on the figure of the cannibalistic giant. though of course Hunter does not literally consume his victims. Even Hunter's insane scheme for vengeance-- to create a trail of scalps connecting his family gravesite to the top of a mountain-- bespeaks the ambition of a giant, rather than that of a merely mortal man.

In the flashback scene, the medicine-man predicts that Hunter will have bad luck if he steals the bear-claw necklace. The trope of the villain "hoist on his own petard" was one commonly used by Kanigher; about a year previous to this story, the author pitted the young Tomahawk against a fiend with a penchant for hangings, who is undone when his scarf gets entangled in a tree-branch, hanging him. However, the bear-claw necklace plays no role in Hunter's defeat. I'll speculate that because of the final parallel between "the claw that is all bear" and "the half-breed who is all Indian" suggests that Hawk himself is Hunter's "bad luck" personified; he masters the killer of red men in a rough parallel to the way men, particularly red men, can master animals. And while Hawk is a liminal figure connecting the worlds of red and white men, the character's final words indicate that the Indian way of existence, of blending with the environment to survive, may be more fundamental than the civilized mode of life-- which may be the very thing that has made Native Americans so popular in popular culture.

Posted by Gene Phillips at 5:39 PM