And now for something completely disconcerting-- a meditation on comic-book diversity that isn't based in ideological overthinking. Said meditation was written by Bryan Hill, a ROC (Reader of Color) who refers to DC Comics' Batman as his "personal totem," for reasons that I won't attempt to summarize here. Nevertheless, Hill, while making the upfront admission that "diversity is an uncomfortable conversation," asserts that the very ideal behind Batman runs counter to the lazy stereotyping of POC.

I never minded that Batman didn’t look like me; most old money billionaires didn’t. What began to bother me, over the years I continued reading Batman comics, was the only people who looked like me were the people Batman targeted. My face was never the grand villain with the Aristotelean tragedy. My face was never on the character that elicited both sympathy and fear. My face was on the thug. The people who looked like me sold drugs, mugged people, and they ended with an armored boot in the stomach and a hog-tie from a lamppost.


What's extraordinary about this essay is although this section sounds superficially like hundreds of other complaints about "lack of comic-book diversity," there is at least an attempt to understand that there may be reasons as to why the conversation about diversity might seem "threatening to the pure joy of reading stories." Most persons stumping for diversity cannot even recognize that there might be a conflict between the "entertaining" and the instructive.

In Part 1, I cited my own example of lazy racial caricatures, those of the many "good Indians" and "bad Indians" of American westerns, so I can hardly deny the possibility that most POC characterizations may be lazy as well-- though I read very little current DC. Based on the Batman stories that I do know-- which I consider reasonably thorough up through the 1990s-- I recall few black people at all, either grand villains or street-muggers.

Here's the closest thing the 1970s spawned to a grand Afro-American villain in the Bat-universe. 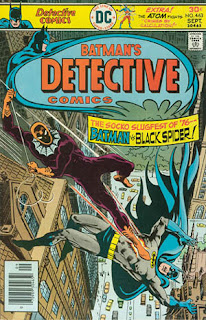 And here's a scene from DETECTIVE COMICS #421, which may come closer to capturing the undesirable characterizations Hill describes. 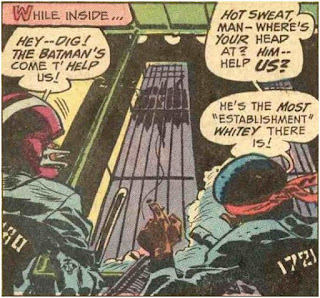 I'm not attempting to support or deny Hill's interpretation of what he's read, since a close study of modern Batman comics might indeed show a propensity toward lazy caricatures of POC. But in line with my current theme, I would guess that most if not all of DC writers would justify their use of negative characterizations with some version of the "bad apple defense." I consider this to be a bad defense when used applied to bad work.

Hill doesn't call for a moratorium on the appearance of low-life black crooks in comic books, or accuse writers who have used such characters as racists. He simply calls for more positive role models. And yet, Batman stories are about his encounters with crime, so he's just not going to encounter that many memorable citizens of color, except as victims. as recurring characters involved in Bruce Wayne's life, or-- as villains.

I don't have any solutions to Hill's concerns, but in line with my remarks on Fu Manchu earlier, I think the comic-book world would be improved by the creation of a "better breed" of POC villains. I would not say that racial caricature should play no role, but it should be intelligent caricature when used at all. For instance, I can imagine the political correctness crowd screaming bloody murder at this Luke Cage villain: 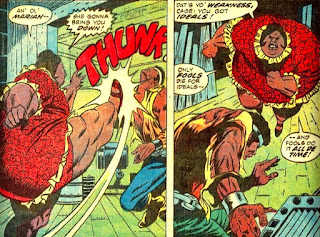 However, though I won't say the story is anything but a decent thrill-ride, the Black Mariah character rates as an intelligent use of a ruthless gang-leader, not least because the term "Black Mariah" is allegedly based on an actual black person from 19th-century America.


That said, I would also like some race-neutral POC villains as well, my favorite being Jim Steranko's one-shot "Centurius" from NICK FURY #2. 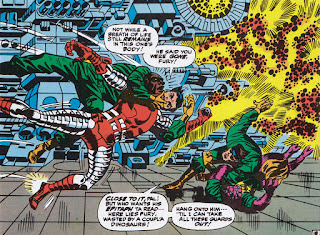 In short, even if I might not agree with all of Hill's interpretations, his is a rare voice in asking for an open-ended conversation.

Posted by Gene Phillips at 4:06 PM