On the previously mentioned Sarkeesian BEAT-thread Heidi McDonald intimated that by my comments I was allying myself to the "winning side" in the Gamergate conflict.  I assume that the "winning side" must be the aggro male culture that allegedly opposes change in the sexual representation of gamer characters/situations-- if, indeed, the culture is as Anita Sarkeesian describes it.

To me it seems a little early for Heidi to proclaim that side the winner in an ongoing conflict, not to mention that it appears to conflict with her moral stance, which has always been to insist that the fight for equality goes ever on, no matter what opposition one encounters.  So I'm going to speculate that Heidi's real meaning is quantitative: I've aligned with the "winning side" because males are numerically superior in gamer culture, and she assumes that I am defending male privilege.

On the contrary, my whole purpose in responding to the Sarkeesian interview is to better define what constitutes a genuine infringement upon the rights of an individual, or group of individuals, in society. No prudent person could possibly doubt that Anita Sarkeesian's personal rights were contravened by the individual who sent a death-threat to Utah State University, as well as by any others who sent similar threats on other occasions. The bone of contention, however, is whether or not all of these threats to Sarkeesian are also exclusively aimed at women, which was Sarkeesian's statement on the Colbert show. One BEAT-poster disproved this statement by listing three male individuals who had received anonymous threats, theoretically because of those individuals' relationships to the Gamergate controversy. When other posters continued to claim that this "toxic" behavior was characteristic of "fanboy culture," I pointed out that the alleged female-phobic behavior was common to sports and politics, where those targeted by anonymous threats may well be males just as easily as females.

None of these observations reduce the seriousness of the actual threats. They do, however, call Sarkeesian's accuracy into question, and raise the possibility that she has purposely distorted the overall facts in order to create a narrative of gender polarization.  The girls just want to have fun, but those cro-magnon guys keep kicking them out of the clubhouse.

If Sarkeesian had admitted that men who took unpopular stances had also been targeted, would that have weakened her talking-points?  Ethically, it should not. Threats against both men and women should be just as insalubrious as threats only against women-- particularly since Sarkeesian claims to be a feminist, and supposedly believes that men and women possess equal rights.  Certainly, from the standpoint of the law-- the principal medium by which men seek to both deny or affirm rights for one group or another-- a crime against a woman is not, generally speaking, more odious than the same crime committed against a man.

Now I've demonstrated that the sexes are theoretically equal before the law, and that if anyone should believes that, it ought to be Anita Sarkeesian, by her own stated convictions. I've also stated that the makers of anonymous death-threats-- who, for sake of argument, may be viewed as dominantly male-- also make such threats against both women and men.  Having established that broad spectrum of this kind of criminal behavior, only then can it be fairly stated that some of the people making such threats are, as Sarkeesian claims, particularly phobic to females and/or feminism. Indeed, one of the three threats issued in the USU case-- does not make any statements re: game culture, but only to Sarkeesian's species of feminism.


"We live in a nation of emasculated cowards too afraid to challenge the vile, misandrist harpies who seek to destroy them," the threat stated. "Feminism has taken over every facet of our society, and women like Sarkeesian want to punish us for even fantasizing about being men. This is why I’ve chosen to target her. Anita Sarkeesian is everything wrong with the feminist woman, and she is going to die screaming like the craven little whore that she is if you let her come to USU. I will write my manifesto in her spilled blood, and you will all bear witness to what feminist lies and poison have done to the men of America."


It's my position that one can only correctly identify such extreme positions of anti-feminine bile by situating them with a greater corpus of overall animus, an animus often directed at anyone, of any sex, who challenges a given fanatic's opinions. Obviously, Sarkeesian's possible "lie of omission" is not as great a sin as someone who breaks the law and issues a death-threat.  Yet it should be evident that I am clearly not aligning myself with the "winning side" simply because I want Anita Sarkeesian to abandon a false polarization-- no matter how much that might vitiate her crusade.

In closing I should note that my approach with respect to aggrieved threat-makers is roughly the same as my approach with respect to aggrieved feminists claim that any and all representations that seem to diminish female characters are *de facto* indicators of male hostility against women.  First one must establish a corpus that takes in all relevant behavior, as I do in ABJECTION APOLOGIA,  being careful to note whether or not male characters are also subject to similar diminutions. Only then can one fairly state that any particular depiction does or does not present evidence for misogynistic tendencies. 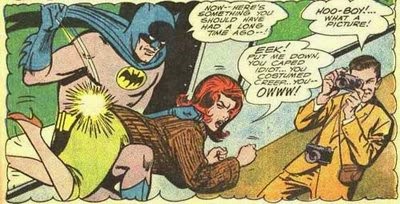 Posted by Gene Phillips at 3:37 PM