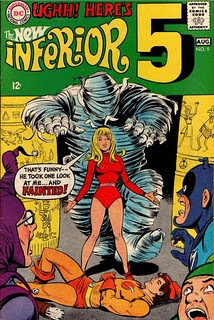 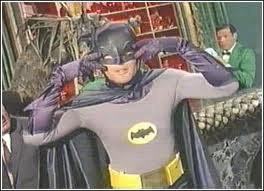 A: When the *dynamis* expressed by either the plot-functions or character-functions within the corpus of a given superhero's exploits is not commensurate with those characteristic of the pure adventure mythos, aligning rather with another mythos, such as that of irony, drama or comedy.

So the riddle's answer isn't funny. Maybe it would sound better if one imagines Burt Ward reading it from a Batcomputer printout, though.

Back in this essay I stressed the problematic status of two similarly-themed television serials, DOCTOR WHO and STARGATE. Both serials made strong use of the *dynamis* typical of the adventure mythos, which in large part stresses the radical of the *agon,* a seriously-toned battle between good and evil whose outcome symbolically re-invigorates the society within the diegesis as well as the reader's simulated experience of that invigoration.

Having said that, though, how much comedy can infiltrate an adventure-story before it ceases being an adventure?

It's true that DOCTOR WHO is not a comedy in the sense of constantly making viewers laugh. At times the situations in many episodes can seem extremely grim. However, I do find that dominantly WHO tends to present its audience with the incongruity of massive alien legions and monsters being undone by the waspish Doctor. Thus, I find WHO closer to the mythos of comedy, which stresses incongruity rather than the serious results of combat, in keeping with Northrop Frye's pronouncement that not every comedy need be funny. (I've noted some of my disagreements with Frye on this subject elsewhere, and I do think that comedies are dominantly defined by their humor, even though not every comedy approaches humor as intensively as the dominant type.)

Now, what should one make of the two 1960s artifacts above?

Clearly the specific images used above were meant to make audiences laugh. But did both share the *dynamis* of both plot and character characteristic of the pure comedy?

In the case of THE INFERIOR FIVE, E. Nelson Bridwell's borscht-belt paean to silly superheroes, I would say yes. Even though the five goofy heroes have power, and even sometimes manage to win battles, the characters are all defined by traits incongruous to the typical notion of the hero. The Blimp is slow, White Feather is cowardly, Merryman is weak, Awkwardman is awkward, and Dumb Bunny is so dumb (HOW DUMB IS SHE?) that she thinks a polar cap is something to keep her head warm.

(Joke stolen from Gardner Fox just for sake of variety)

The plots of INFERIOR FIVE, too, are clearly meant to stress incongruity over agonic action. I noted above that the heroes sometimes do win battles, but generally it's out of sheer dumb luck rather than through skill. At the end of one representative issue of INFERIOR FIVE, a villain hooks the captured heroes up to a machine designed to siphon off their powers and give them to one of the villain's henchmen. Instead the machine works in reverse, siphoning off the heroes' weaknesses so that, for two pages, they become super-capable at kicking the hell out of the villain and his henchmen. This scene pretty much defines how the elements of adventure are subordinated to those of comedy.

But can one make the same claim about the 1966-68 BATMAN teleseries?

Adam West once defended the series against the attacks of comics-fans by claiming that the absurdities the show depicted weren't substantially different from those of the current comic-book adventures of Batman (who, in case anyone's wondering, DOES fit the criterion of pure adventure no matter how many times he had adventures with Bat-Mite).

West was both wrong and right. He was wrong in equating the two serials in that the camp-flavored teleseries couldn't switch gears as the comic book series could. There was no place in the teleseries for a story of ratiocinative detection or a "Robin Dies at Dawn."

However, West was right in a way I doubt he suspected. That is, no matter how many absurdities the BATMAN TV-series presented, the characters believed in them, as if being threatened by a giant Frostee-Freezee death-trap were the height of high seriousness. Indeed, the "Batusi" scene from the serial's first episode, while amusing, is one of the few times West's Batman broke character. In his biography West stated that at first he wanted to do the scene in a clownish manner, but that he was persuaded that he should affect a "straight" approach to the Batusi scene in keeping with the "camp" aesthetic. However, though the scene does avoid the level of the pure pratfall, it doesn't quite succeed, as did most later episodes, of keeping Batman serious while all about him was absurdity.

For this reason I consider the BATMAN teleseries, if not "pure adventure," to be a hybrid form in which the *dynamis* of adventure dominates over that of comedy, though clearly comedy's elements are in fuller play here than in most other iterations of BATMAN.

Because the heroes seem genuinely threatened by bizarre villains and death-traps, both plot and character validate the power of the adventure-mythos even while managing to keep the comic elements in play. This is why, even for later generations of kids not yet jaded enough to laugh at Batman, the series can still excite and fascinate them, precisely because even with the giant OOFS and WHAPS, the invigorating thrill of the agon still predominates.
Posted by Gene Phillips at 3:37 PM