The first Marx-munchkin quote in the Van Cook essay comes from Louis Althusser:

Ideologies are perceived-accepted–suffered cultural objects, which work fundamentally on men through a process they do not understand. What men express in their ideologies is not their true relation to their conditions of existence, but how they react to their conditions of existence; which presupposes a real relationship and an imaginary relationship.

Buried in this jargon-heavy twaddle is the standard Marxist take on the notion of *ideology.* Coined during the French Revolution, the word originally connoted any system of ideas regardless as to whether it was philosophically elaborated or not. Marx and his followers appropriated the word and applied it purely to the ideations of the bourgeoise, who by virtue of their exploitative culture are defined as incapable of any "true relation to their conditions of existence." Bourgeoise productions, whether they address themselves to "high" or "low" segments of the culture, are necessarily informed by "ideology," which is another way of saying "false consciousness." Said falsehood stands in contrast to the ideations of Marxism, which are alleged to be non-ideological because they are Really Really Real.

Thus Althusser is clearly within the tradition I have termed "ratiocentric," in that no matter whether one is writing of Balzac or Jack Kirby, the ratiocentric analyst assumes that there is nothing "true" within the work of the bourgeois artist, only patterns that prove the validity of Marxist thought. Van Cook is entirely in this tradition as well when she characterizes both Stan Lee and Jack Kirby as pawns of a capitalistic puppet master: 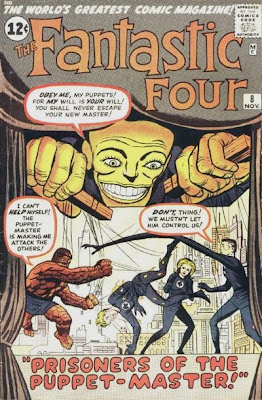 I wish to affirm that both Kirby and Lee were proud to work within the ideology of American capitalism. In the legal case, neither side stands or challenges American capitalism on ideological grounds overtly, despite a strong undertow of class and labor issues that largely go unspoken. And while I have framed many of the issues within the sphere of artistic production, certainly both Kirby and Lee saw themselves in the business of selling comics. Elsewhere, Althusser helpfully casts light how problems might arise undetected by two men who had not only served in the military as a system of American ideology, but had become a part of the means of production for that ideology.

I'm not surprised that Van Cook rushes to mention the irrelevant fact that both Lee and Kirby served in the U.S. military. In the fundamentally-elitist view of a ratiocentrist, this is more proof that the subjects named have been hornswoggled by a repressive cultural hierarchy. However, the reference actually weakens her case, for one must then ask whether or not those producers of bourgeois art who DON'T serve in the military are somehow less enslaved by the system. Thus, since Julie Schwartz didn't (so far as I can tell) serve in the repressive U.S. military system, it would be logical if he were the first comics-editor to, say, go against his culture's ideology by including a black character as the regular member of a heroic team.

Except of course-- it wasn't Schwartz, but Stan Lee.

Next essay: why the bourgeoise productions of Lee and Kirby do indeed contain "a true relation to the conditions of their existence," albeit not one of which Althusser would approve.

Posted by Gene Phillips at 5:06 PM

So far as I know, Julie Schwartz tried to enlist in the Army during WWII (like his friend Mort Weisinger) but was declared 4F due to his bad eyesight.

Thanks, RAB. I pretty much chose Schwartz at random. I could have named pretty much anyone who didn't happen to have served in the military during that time-period, though it occurs to me that the best example might've been someone who stayed because of political opposition to serving in that war. Point being that having served in the military doesn't mark one as a hidebound protector of society's values in every respect, though of course both Lee and Kirby authored works with conservative leanings at times.

A reader corrected me on having stated that Gabe Jones was "the first" regular black heroic character in an American comic, reminding me of Jackie Johnson in SGT. ROCK. Here's what I wrote as a self-correction:

"...on my blog I wrote a piece in which I stated that Gabe was the first regularly-occuring, non-sidekick/comedy relief black heroic character in a commercial American comic book. I had thought Jackie Johnson of Easy Company was more an irregular member, but it seems not so.

To further amend: there were a few black heroic characters in the jungle titles. I think one issue of Timely's LORNA has a single appearance of such a character, spun off from the LORNA cast, and of course Dell published BROTHERS OF THE SPEAR as a backup in the 50s, in which Dan-El and Natongo were co-equals rather than hero and sidekick."