‘Meaning is derived from context, and there are two contexts for verbal meaning: the context of literature and the context of ordinary explicit or intentional discourse. When we first read a concentrated and difficult poem, we first try to grasp its explicit meaning, or the prose sense of what it says. We often call this the “literal” meaning, but actually it is a translation of the poem into a different verbal context, and is not what the poem really means at all. Gerard Manley Hopkins draws a distinction between the poet’s “overthought” or explicit meaning, and his “underthought,” or the meaning given by the progression of images and metaphors. But it is the “underthought” that is the real poetic meaning, and the explicit meaning must conform to it ...-- Northrop Frye (fuller context here).


On a deeper symbolic level, Marston as author certainly knows that Wonder Woman’s conversion of “man’s world” to the law of Aphrodite is his personal fantasy, but as long as his creation Wonder Woman keeps saving fictional victims, that law is continuously validated.'-- me, MYTHCOMICS #23:WONDER WOMAN #1.

At the end of BETTER THE DEVIL YOU KNOW PT. 2, I said that I'd explicate an example of the species of "adversarial criticism," which I define as criticism in which the critic assumes an adversarial relationship to the literary work he critiques, beyond merely judging its merit as literature.  For this essay, I select Charles Reece's essay ON SECOND THOUGHT, I REALLY DON'T LIKE WONDER WOMAN, which appears on the HOODED UTILITARIAN in part one (the bulk of which does concern Wonder Woman) and part two (which only tangentially concerns the DC heroine).

Reece's essay is a perfect example of the process of "overthinking the underthought" as per my title. The "underthought," Frye tells us in the above quote, is the "real poetic meaning" of any given literary work, and for centuries critics have attempted to validate their livelihoods by demonstrating that they possess the ability to discern the real meaning beneath the merely "explicit meaning," or "overthought," of said work.  As a quick example, anyone can sum up the "overthought" of HAMLET by simply reciting the "prose sense of what it says," but the "underthought," conveyed by "the progression of images and metaphors" within the work, is a more dicey proposition.


My examination of WONDER WOMAN #1 and Reece's examination of the WONDER WOMAN mythos generally (though he only cites the events of one story from WONDER WOMAN #28) have this one critical purpose in common: in Fryean terms, both of us are claiming to have ferreted out the "underthought" represented within the stories critiqued.  However, I assert that the thing that separates our methods is that I believe, as Frye says at the end of the above quote, that there must be some agreement between underthought and overthought, between "poetic meaning" and "explicit meaning."  Reece, in contrast, feels that he can represent the underthought as what it connotes to him, with scant reference to the overthought/explicit meaning of the work in question.


If there’s a danger to Marston’s feminism, it’s in his tranquil submission to a “loving” authority. Don’t ultra-nationalists love their country? He circumvents this problem by making his heroes as anodyne as possible. We should trust the Amazonians, because we know they are pure and virtuous. Granted, this hardly sets Wonder Woman apart from all the other classic DC heroes, but isn’t that a problem? Even a feminist heroine can be as indicative of the fascistic aesthetic as any of her male counterparts. Marston’s creation helped with equality in representation, but it did so by presenting some ideas that any libertarian-minded type should find fairly repellant (and by ‘libertarian’ I mean the philosophical belief in free will, not necessarily the political variety)...Any society that promotes a totalizing agenda should be feared and distrusted, as should art promoting such an agenda, whether it’s rooted in misogyny or feminism.


Throughout his essay Reece will keep Marston in the docks for the charge of having promoted a totalizing "propanganda," taking as gospel (perhaps naively) Marston's philosophical tub-thmping on behalf of his Amazon creation, as seen in this Marston quote offered by Reece early on:


[That w]omen are exciting for this one reason — it is the secret of women’s allure — women enjoy submission, being bound [was] the only truly great contribution of my Wonder Woman strip to the moral education of the young. The only hope for peace is to teach people who are full of pep and unbound force to enjoy being bound. … Only when the control of self by others is more pleasant than the unbound assertion of self in human relationships can we hope for a stable, peaceful human society.


Was Marston sincere in his belief that women might transform society through an ethic of submission?  Probably to some extent, though I prefer to give the author the benefit of the doubt.  In my summarizing quote above, I opined that Marston was surely aware that his fantasy of the "law of Aphrodite" was just that, a metaphorical fantasy, and therefore the "underthought" to the events of Wonder Woman saving widows and orphans and whatnot.  Precisely because WONDER WOMAN was fantasy and not some fanatic's account of his personal hegira, I don't believe that it's fair to regard the series as "art promoting a totalizing agenda."

Speaking of "totalizing," I find that Reece uses totalizing logic in aligning all "pure and virtuous" heroes with "the fascistic aesthetic."  Comic books certainly did not invent the narrative strategy of asserting that a given hero was  foursquare virtuous (not to mention good-looking), which qualities made that hero worthy of the reader's emotional investment and conviction.  However, I doubt that any medium outside of comic books has been so frequently pilloried for using this narrative device to usurp the "free will" of their readers through this identificatory process.

In order to vilify the heroes, of course, such dodgy critiques must elide or downplay the act of the villains opposed by said heroes.  In the comments-thread of the second part of Reece's essay, I challenged him on this point with the comment I preserved under QUICK COMMENT PRESERVATION.  My opposition boils down to this statement:


I find it really hard to reconcile a “dominating will” who waits until the other guy strikes. That too would seem not to line up well with your “fascism” charge. I’ll agree that a reluctant hero is inevitably going to kick ass. But that doesn’t eliminate the connotative difference between the reluctant hero and the quasi-hero who’s ready to go Lobo on anyone with the least provocation.


I'm not going to rehash Reece's responses at length here, as anyone (at this time) can search out the thread and read it.  But as far as I can tell,  Reece feels that the actions of the villains are merely excuses for the hero to kick ass, rather than diegetic realities in themselves:

Similarly, WW’s dominating will can remain passive (on the surface) so long as everyone shares it. When someone violates the (Amazonian) dominant order, she uses force to contain the transgression. Is a dominant will operating under the ideologically determined image of waiting “until the other guy strikes” all that difficult to reconcile when we live in a country with fundamentalist Christians?


This old dodge was often practised by both Frederic Wertham and Gershon Legman; in order to prove superheroes fascist, you dismiss the diegetic reality of the villains whom they fight, who most often are seen robbing and killing and swindling, and choose to perceive them simply as amorphous violations of a "dominant order."  That way, you paint the hero/ine as a mindless defender of that order-- one that can then be compared, no matter in what far-fetched manner, to whatever dominant order one doesn't like ("fundamentalist Christians.")

I remarked earlier that there should exist a conformity between the story's "explict meaning/overthought" and its "poetic meaning;/underthought."  Whereas my analysis of WONDER WOMAN #1 cites every major event in the story, the only event on which Reece focuses in his critique of WONDER WOMAN #28 is the fact that Wonder Woman's opponents, the aggregate of WW foes known as "Villainy Inc.," seek freedom from their conditioning on Paradise Island.  He makes this most explicit in the comments-thread:

And get this straight: the only characters talking about freedom in WW#28 are the villains. That’s right, Marston only has villains caring about freedom. If he sees them as fascists (which I doubt that he does), then that would be a pretty clear cut case of Newspeak. The book is totalitarian and authoritarian. It views mind control as good and individuality as bad.

Of course the freedom of the villains here means, within the diegesis, the freedom to commit any crime they please, ranging from Queen Clea enslaving a whole society to Zara simply swindling people with her flame-powers.  Reece, busy overthinking his agenda against fascist agendas, gives no thought to the fact that all of the villains are much closer to practicing the vices of fascists than Wonder Woman or her Amazons.  The ladies of "Villainy Inc." are "individuals" only within the sense that they're colorful opponents for the hero within a fictional cosmos.  In real life, you wouldn't want to sample their individual "quirks." 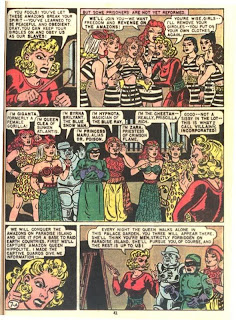 Part 2 will touch on other problematic aspects of the sort of criticism that is to literature as a prosecuting attorney is to the subject of an indictment.

Posted by Gene Phillips at 5:18 PM

I'm content letting the essay speak for itself, but I appreciate anyone who diligently read it, so thanks. I think my fundamental point about villains and freedom is being missed here, though: Wonder Woman isn't the one defending freedom, the villains are. It's very much in the text of the comic: whatever evils the villains have committed in previous issues is aligned with a demand for self-determination and free will. What conclusion is there to be drawn here when the ones even you are acknowledging as the bad guys are the ones espousing the virtue of freedom? I think Marston's message is loud and clear.

"A soft answer turneth away wrath?" You and Noah are no-ah fun to argue with any mo-ah.

My counterpoint to your fundamental point is that the villains can't be a true representation of "free will," in that their self-determination is predicated on the enslavement and/or exploitation of others. I think Marston saw that the re-programming of criminals like this as a necessity, but preferred to show Wonder Woman enhancing the will of ordinary disempowered citizens-- for example, the woman tyrannized in the first Doctor Psycho story.

I won't say that the villains' struggle has no significance at all. There's an extent to which any artist, no matter what view he expouses, can be of "the devil's party" as per Blake's memorable estimation of Milton. But one shouldn't override all the other content in favor of one adversarial reading. I'll expand on this elsewhere.