In the second paragraph of the Poetics Aristotle speaks of the differences in works of fiction which are caused by the different elevations of the characters in them. In some fictions, he says, the characters are better than we are, in others worse, in still others on the same level. This passage has not received much attention from modern critics, as the importance Aristotle assigns to goodness and badness seems to indicate a somewhat narrowly moralistic view of literature. Aristotle's words for good and bad, however, are spouddos and phaulos, which have a figurative sense of weighty and light. In literary fictions the plot consists of somebody doing something. The somebody, if an individual, is the hero, and the something he does or fails to do is what he can do, or could have done, on the level of the postulates made about him by the author and the consequent expectations of the audience. Fictions, there fore, may be classified, not morally, but by the hero's power of action, which may be greater than ours, less, or roughly the same. -- opening paragraph of Frye's "Theory of Modes" in ANATOMY OF CRITICISM.

Definitions of "stature":
1 : natural height (as of a person) in an upright position
2 : quality or status gained by growth, development, or achievement--
Merriam-Webster online.

It now seems to me that although the significant value of "conviction" provides an ancillary function in terms of how readers apportion value to different characters in different mythoi, the central value is best covered by the word "stature."  I note that in Frye's paragraph he speaks of the "different elevations" of the characters, which may be fairly considered an assignment of their "stature," whether it's within the quasi-aristocratic schema of Aristotle or within Frye's Spenglerian conception.

Further, "stature." unlike "conviction," has a more direct connection with the concept of *dynamis.*  As the dictionary says, stature is a positive quality resulting from "growth, development, or achievement"-- an abstract quality based upon the physical nature of human growth-patterns. One may consider the aforesaid achievement as the result of exercising one's energies-- or *dynamis*-- to their fullest as per Nietzsche's dictum on the "will-to-power."

Yet, within the vagaries of literature, great power doesn't always convey great stature (or contrary to Stan Lee, "great responsibility").  Or, to be more precise, the four mythoi each bestow a different type of *stature* upon their focal presences.  Given my pluralistic stance, it would be incorrect to assume that a comic hero has *less* stature than a serious hero.  The comic hero fulfills the stature appropriate to an unserious character, just as the serious hero does for his endeavors.

At the end of PARADIGM SHIFTING I chose four series-characters who were similar in that all four possessed a high level of *dynamis* within a *marvelous* metaphenomenality-- meaning that all can do fantastic things like breaking brick walls, casting magic spells, etc. I broke down their affinites with the Fryean mythoi as follows:


I should note that the scheme I propose does not depend on focal presences who possess marvelous powers.  It could be illustrated just as easily with protagonists who fell into either the "uncanny" or "naturalistic" phenomenalities that I've described in great detail elsewhere.  I did wish, however, to choose only characters with a high level of *dynamis* appropriate to a particular phenomenality, as well as characters who all tended to win their serial victories, since that uniformity helps me illustrate the different *stature* that accrues to each character, despite the similarities in terms of narrative values.

"I always win," Buffy Summers says as she squares off against a demonic Ubervamp in the seventh-season episode "Showtime."  To be sure, the super-vampire has beaten her on a previous occasion, but like most if not all adventure-heroes, Buffy's ultimate triumph is guaranteed by her mythos.  Adventure-heroes are meant to overcome the forces of evil, and in general the worst they can do is to die with their opponents, as the medieval Beowulf does while slaying a fearsome dragon at the same time.  To reference the terminology of myth-ritualist Theodor Gaster, the entire point of this mythos is to impart to the audience the "invigorating" thrill of victory, with little if any "agony of defeat." 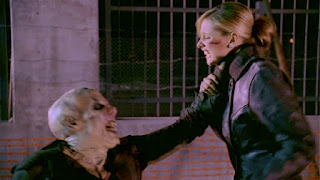 In contrast, the heroes of the dramatic mythos don't necessarily always win, although it's significant that when Aristotle speaks of tragedy he includes an example of a "happy-ending tragedy," Euripides' IPHIGENIA AT TAURIS.  J.K. Rowlings' Harry Potter series  is a series which focuses far less on the thrill of victory than on what Frye calls the heroic "pathos" and what Gaster deems the "purgative" quality of ritual myth.  The presence of pathos implies the strong possibility that the hero may, like Orestes in the aforementioned Euripides play, become a sacrifice rather than a victor.  Throughout the Potter book-series, the central character wins most of his significant battles either singly or with the help of his retinue, but he's constantly stalked by the threat of the evil Voldemort and by prophecies that suggest, however ambivalently, that Voldemort will eventually kill him.  Harry Potter survives his trip to Calvary, but the series' emotional tone focuses upon the all-too-human pathos of its teenaged characters, and their need to control and/or purge their emotions in order to win out. 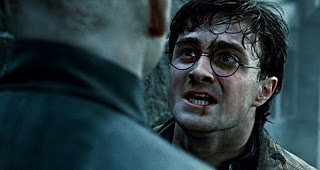 Now, I've noted in other essays that the heroes of ironic narratives usually don't win, but when they do, it's usually a victory in which the audience can place no conviction, as I noted in respect to Paul Verhoeven's ironic SF-film STARSHIP TROOPERS.  The Mills/O'Neill character Marshal Law conforms to this pattern, as shown by this Wikipedia entry:


The title character, Marshal Law, is the government-sanctioned "super hero hunter" (aka law enforcement officer, or “cape killer”) with superpowers in the city of San Futuro, the near-future metropolis built from the ruins of San Francisco following a massive earthquake. Law's job is to take down other superheroes who have gone rogue, which he does with maximum force and great pleasure. Aided by the wheelchair-using “Danny” and his physically imposing (but extremely polite) partner “Kiloton”, the Marshal operates from a secret police precinct hidden below the city, dispensing just enough brutal justice to keep the city’s many super-powered gangs in a balanced détente while safeguarding the ordinary citizenry.

Although Marshal Law wins all of his battles against the superheroes-- who are seen as being stupid and venal even when they are not lawbreakers-- he generally exists in a world to which no redemption is possible.  Whereas it matters a great deal whether or not Buffy Summers triumphs over the monsters menacing her world, the Marshal's victories merely illustrate that he shares the venality of his enemies in no small part.  Thus the stature that accrues to Marshal Law is "mortificative" in Gaster's terms: the hero takes pleasure in scoring satiric points off the creators' targets, the superheroes, but the world he exists in has no positive aspects worth speaking of. 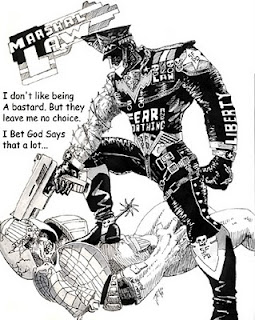 Adventure-heroes always win, or at least lose so rarely that most audiences take no account of the losses.  Ironic heroes rarely win, and when they do, the victories mean nothing.  Dramatic heroes occasionally win but they go through such pathos-inducing straits that they don't get much of a thrill out of it.  What's left for the comic heroes?

Comic heroes, whether they are as powerful as Ranma Saotome or as bumbling as Johnny Thunder, tend to win out, though they tend to do so less by superlative skill than by dumb luck.  Ranma usually displays superlative fighting-skills, and he does win most of his assorted battles with other comedic kung-fu opponents, but the emphasis is clearly upon finding ways to amuse the audience by undercutting the hero's triumph with silly pratfalls, comic embarassments and the like.  Thus his stature within his mythos exists to be a vehicle not for thrills but for the jubilative mood of the *incognitio,* the comic incongruity-- which, in Ranma's series, often takes the form of his transforming from a young guy to a big-breasted young girl. 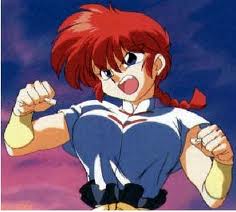 I have not yet decided on a means of labelling the respective types of mythos-stature.  This will probably appear in a forthcoming essay, however.

Posted by Gene Phillips at 3:42 PM