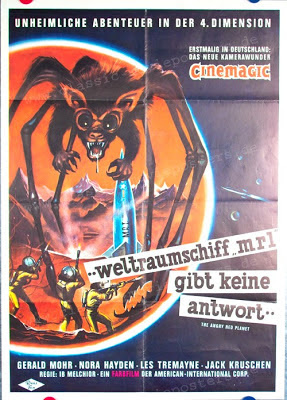 In keeping with my observations in Part 1, I'll detail two more examples of films that share the quality of being combative in terms of one value (the significant), though they divide in terms of the other (the narrative).

The first film to consider is 1959's THE ANGRY RED PLANET, which I reviewed here.

The above film-ad shows a combat between the futuristic astronaut-protagonists of the film-- armed, naturally, with the requisite ray-guns-- as they contend with the most famous beastie they encounter, the so-called "Rat-Bat-Spider."  Clearly both the ray-wielding astronauts and the monster qualify as megadynamic sources of might, which satisfies the significant value.

However, ANGRY RED PLANET cannot be combative in a narrative sense, as the film does not center around any of the combats between the astronauts and the Martian monsters.  The various menaces are something of a gauntlet the heroes run until they are sent back to Earth, more or less with their tails between their legs.  Therefore the overall spirit of this space-drama is subcombative.

In contrast, 1956's FORBIDDEN PLANET-- which possesses a wealth of virtues that the later film does not-- also possesses the narrative combative value as well as the significant combative value.

The significant value is obvious in the assorted scenes in which the astronaut-protagonists come to grips with the "Id Monster," prior to finding out that it's been generated by Krell machines which are in turn responding to the anxieties of scientist Dr. Morbius.

However, whereas the sense of escalation to a final confrontation is absent from ANGRY RED PLANET, FORBIDDEN PLANET builds this sense by virtue of the baffled astronauts as they attempt to learn the nature of their invincible enemy.

To be sure, when the Id Monster is defeated, it isn't because of the clash between the weapons of Earth-science and the power of the Krell machines.  The Monster is defeated by undermining the source of its power in Morbius, who is in essence the Monster's Achilles heel.

Nevertheless, without the clash of energies that establishes how potent the Id Monster is, there would be no narrative perception of the need to seek such a vulnerable point.

I'll note in passing that I rate the central heroes of both films as "demiheroes" in that they are concerned more with the Hobbesian value of "safety" than of "glory."

Posted by Gene Phillips at 5:19 PM