I've been wanting to keep my hand with the occasional comics-review, so I'm introducing the new feature "The Reading Rheum"-- as in, you know, the eyes get all RHEUMY from too much READING.  I have no idea if I'll try to do one a week, as I did for a time with the "1001 myths" project.  Some of the comics surveyed here may be new, but are more likely to be older stuff I happen to reread.  Some of them may be mythic comics, but I must admit that sometimes I like the old-fashioned, almost brain-dead kind as well. 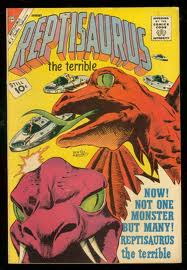 REPTISAURUS, a Charlton issue which ran for five more issues, started out as a two-issue adaptation of the 1961 Danish monster-movie REPTILICUS. Apparently Charlton thought there was still some money to be made with giant monsters, so once their license to adapt Reptilicus expired, they simply brought in a retitled reptillian ringer.

It's sobering to read something this awful and recall that this was far more typical of comics-work than such better-remembered works as the Fox-Sekowsky JUSTICE LEAGUE and the Lee-Kirby FANTASTIC FOUR.   GCD credits #3 as the product of writer Joe Gill and artist Bill Molno.  I may have seen other Molno work without knowing it, but this is exceedingly primitive work, resembling something out of a fanzine of the period rather than professional art.

Scripter Gill was known in the day as Charlton's workhouse writer.  In his last interview, published in CHARLTON SPOTLIGHT #5, Gill revealed that he had an arrangement with the publisher: he agreed to accept Charlton's low pay rates if the publisher would accept everything he wrote without requiring rewrites.

REPTISAURUS, the first story to launch the red reptile in his new ID, certainly reads like its author knew he could get away with anything.  The first section deals with the birth of Reptisaurus, a "mutant" pterodactyl, back in primitive times.  However, no sooner has Gill tossed out the term "mutant" than he contradicts it, by revealing that Reptisaurus has a mate of his own species, one with whom he'll be seen to be able to spawn.  Both Repty and his bride are frozen by some Ice Age and are later awakened by modern-day nuclear tests.

So far, so ordinary.  What makes this issue so incredibly crackbrained is that before the modern-day Earthpeople even encounter the big reptiles, the two of them happen to stave off an alien invasion.  Again, this was not particularly new in the world of comic books.  The brain-cracking stuff is the way Joe Gill handles the aliens:

*They're from Jupiter, but they're not "Jovians" or even "Jupiterians," but-- "Jupos."

*When the Jupos use names amongst themselves at all, they're called "John" and "Harold."

*When Reptisaurus is finally shot down by gamma rays (a little before the Hulk had them, I think), the alien leader exclaims, "Excellent! Dandy!"  (At first I thought I was reading Jerry Siegel in his most antic mood.)

*Finally, the aliens actually manage to defeat both big beasts, but the Jupos are sent packing when they're attacked by the pint-sized flying reptiles recently spawned from the female's eggs.

I don't know if I'll collect any more in the series.  I have a notion that Gill isn't likely to have topped himself after producing this sublime a stupidity.

Posted by Gene Phillips at 5:37 PM