OF SHERLOCK AND PSYCHOS PT. 2

In PART 1, I said this of Sherlock Holmes' unusual deductive abilities:

After weighing the matter, I would say that most of Holmes' amazing observations about people still tend to belong to the naturalistic, as they do not create a sense of strangeness.  So Holmes uses a naturalistic, not an uncanny, version of the "illusionism" trope.


Having said that most of these demonstrations of mental superiority are naturalistic, by what criterion can one judge even a few of them to enter the domain of the uncanny?

The most striking-- literally-- example of an uncanny employment of such skills appears in the 2009 SHERLOCK HOLMES film.  In this essay I noted that Holmes showed rather "hyped-up" combative skills in this film. 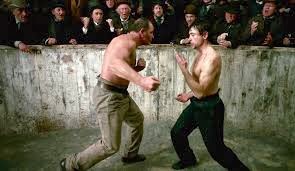 What I did not then note is that in this scene Holmes-- who is obviously less heavily muscled than his opponent-- is utilizing his deductive skills as Doyle's character never did and probably never would have: to suss out his opponent's weaknesses and to plan his attack with machine-like efficiency.  Thus this film, which I have not yet reviewed, would fit the uncanny version of my trope for "uncanny skills." The film's use of graphics to depict the way Holmes thinks-- projecting words or images onto the screen, to share diegetic space with the actors-- also imparts an aura of "strangeness" to Holmes' computer-like cogitations.

But it may not always be necessary to use visual graphics to suggest mental strangeness.


In my review of the 1931 adaptation of the Doyle short story, THE SPECKLED BAND, I deemed this film to be uncanny due it features 'a method of murder so peculiar that it falls into my category for "bizarre crimes."  Said method is that of an evil stepfather forcing his stepdaughter to sleep in a pre-designated room with a bell-cord pointlessly hanging over it, and then to introduce a swamp adder into the room's ventilator shaft, so that the serpent will crawl down the cord, kill its victim with a bite, and then retreat when called back up the bell-cord.

My rationale for deeming both the short story and its adaptations as works of the "uncanny-metaphenomenal" is the same as with all others: though there is no violation of the laws of cause and effect, causality's rules are bent, in that people, their societies, their devices or the creatures with whom they interact go beyond the domain of the naturalistic in terms of normal behavior.  In many cases, the person who commits the bizarre crime-- such as the near-supervillain Blofeld in Ian Fleming's THUNDERBALL-- is the only one associated with it.

However, the villain of SPECKLED BAND may conceive of his bizarre murder-method, but the hero mirrors the villain's ingenuity by being able to deduce the plot by piecing together such disparate clues as a useless bell-cord and a mysterious whistling sound-- the one being the snake's method of entry, the other being the method by which the snake's owner calls the creature back up the cord.  In this story, Sherlock accomplishes his feat of detection by drawing upon his encyclopedic knowledge of exotica, rather than by making deductions based on reasonable premises.  In contrast, Holmes' solution of the HOUND OF THE BASKERVILLES mystery depends not on special knowledge but on a careful observation of available facts.  Holmes' knowledge of exotica then may qualify him as an uncanny entity in this story, just as a similar body of knowledge elevates Professor Van Helsing in the DRACULA novel to a status above that of an ordinary individual.


Ironically, neither method would work in the real world.  It's very unlikely that a snake could negotiate a hanging cord without simply falling off, and since snakes are deaf, it would hardly respond to a whistle-cue.  But these are merely errors of verisimilitude.  Such errors don't affect whether or not a work logically qualifies as a metaphenomenal one.  And even if some character in the movie stopped the proceedings and started telling the audience that there was no such thing as a "swamp adder," such a scene by itself would only rate as a "fallacious figment" in the naturalistic mode.  A similar scene appears at the beginning of 1965's THE ALPHABET MURDERS, when Tony Randall briefly breaks the fourth wall to tell the audience that nothing unusual is going to happen.  In contrast, a "figment" in the uncanny mode can be seen in 1968's HEAD, where the Monkees' attempt to win clear of the clichés of the entertainment industry are doomed, and they remain the prisoners of their own, or someone else's, "heads."