At the conclusion of THE PHENOMENALITY OF PSYCHOS I wrote:

At present I have not found a necessary connection between the two forms of the sublime.  It does suggest to me how some figures of comparatively low dynamicity can suggest that they are more powerful than they really are. I conclude that it is because of the effect of the combinatory-sublime, which seems to invest such figures with a larger-than-life "mana."


To toss out a more concrete example, PSYCHO's Norman Bates and the Jason Voorhees who debuts in FRIDAY THE 13TH--PART II are both "perilous psychos" within the category of "the uncanny." They are not equals in terms of their dynamicity-- Norman is at best at the low end of the "x-type" level of dynamicity, while Jason, even when he's supposed to be no more than a deranged human being, clearly occupies the high end. But they may be deemed as equals in terms of their mythicity, a narrative value that has its roots in the affects I have termed the combinatory-sublime.

I emphasize again that mythicity is not coeval with popularity.  The mad killer from 1983's CURTAINS is probably no more formidable than Norman Bates in terms of dynamicity, but she isn't anything to write home about in mythic terms. However, the psycho-killer in 1971's BLOOD AND LACE is barely known outside the halls of horror-fanatics, but I rated her mythicity as "good" in my review, if not quite as good as that of Norman and Jason.

One thought I'm toying with is that although I still believe that the mode of the combative is determined by the presence of both *dynamicity* (an exceptional level of power is expressed in the combat of at least two opposed entities) and *centricity* (their combat is central to the plot), the aspect of the combinatory-sublime may affect the way in which a given protagonist's *dynamis* is received.

For instance, I wrote in this essay that even though ordinary gangsters are not able to fight the Golden Age version of the Spectre, the author had to throw in complications so that the Spectre would have struggle on some level.  I would add to this observation that criminals in THE SPECTRE represent more than just ordinary crooks: collectively they are the evil that forces the undead avenger to keep up his crusade, rather than going to his eternal rest. On this admittedly limited level, then, even the most mundane crooks assume greater mythicity than they would in a less ambitious story. 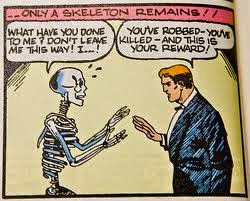 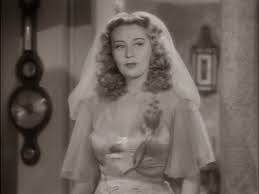 This engaging if simple comedy-- barely a TOPPER film at all, as the titular character has little to do in it-- is really about co-star Joan Blondell's character Gail Richards. While staying at a typical Hollywood "old dark house," Gail is murdered by an unknown assailant.  Gail rises again as a ghost who wants to bring her murderer to justice, and forces the twittery Topper to help her.  To be sure, though, like other ghosts in the TOPPER oeuvre, Gail is able to affect the physical world. In one scene the masked murderer attempts to kill again, and Gail, turning invisible, rains punches down on the confused killer until he flees. At the climax she does manage to ferret out her killer and cause his death too.

The mere fact that the mystery killer is not exceptional in his dynamicity would keep this from being a "combative" film.  However, would things be different if the killer had a more prepossessing aspect, if he had some sort of bizarre identity like "the Bat?"

Such an added fillip might indeed make a difference, and in future essays I'll discuss some reasons why.