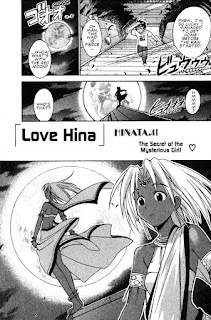 (I date this story "1999" because that's the date given for the whole volume of translated stories in which the story appears, but it may or may not be the actual date of first publication. The entire story is online here.)

A few months back, I was talking about manga with a fellow comics-fan, when he asked me, more or less out of blue, "What's with all the INCEST in Japanese comics?" (Or words to that effect.)

Since this is the sort of question for which no one-- not even the Japanese people themselves-- can provide a definitive answer, I gave my acquaintance a speculative explanation. I observed that the closest Japanese analog to the Judeo-Christian "Adam and Eve" are Izanagi and Izanami, two divine siblings who mate in order to produce most if not all of the created world. I hypothesized that it might have made a great difference in European culture if Adam and Eve had been literal (as opposed to figurative) siblings-- and that possibly Japanese culture was simply more prone to using this transgressive set of tropes than many other cultures because of their traditional mythology. I addressed some other aspects of this cultural predilection here.

I've already written about the Ken Akamatsu series LOVE HINA here, from which I borrow the following series-analysis:

The set-up for LOVE HINA is that nebbishy loser Keitaro Urashima finds himself managing a girls' dormitory for middle school and college-bound high-school students. Naturally, in the long-running tradition of harem comedies, the girls are winsomely cute, and eventually all of them become enamored on some level with Keitaro, the only male living with them. A modicum of adult supervision is provided by Keitaro's aunt Haruka ... but most of the time the girls are free to tease and torment Keitaro, who gets no points for being a little older than the oldest of them, since he's failed his college-entrance exams three times at the series' beginning.  The clansgressive vibe generated by the series eventually develops along the lines of an older "brother" being forced to put up with the hijinks of a band of capricious "sisters," all of whom take on a sibling-vibe partly because they share a house....


In this essay I analyzed the dynamics of the clansgressive "almost-but-not-quite-a-sister" fantasy found in LOVE HINA, but "Secret of the Mysterious Girl" is focused on the character of middle-schooler resident Kaolla Su, an energetic girl from an indeterminate, quasi-Indian realm. I touched on her most mythic aspect in the essay:

...though [Kaolla] too is a middle-schooler who would be age-inappropriate for Keitaro, Kaolla possesses a magical ability to "age" herself temporarily, so that she can become closer in age to the beleaguered dorm-manager.


"Mysterious Girl" is the first story to show that Kaolla can magically transform herself to a girl more suited to Keitaro. LOVE HINA is generally a very silly comedy, mingling fantasy-material with mundane reality with no particular rhyme or reason, but here the author touches very artfully on the topic of feminine maturation, though of course without neglecting the farcical elements. At a time when only Keitaro, Naru and Kaolla occupy Hina House, a massive storm creates some weird meteorological phenomena, including making the full moon appear to turn red. Keitaro, who hopes for a romantic encounter with Naru, finds himself frustrated by Kaolla's interference. As if to mock his needs, the middle-schooler-- whom Naru jealously calls a "child"-- invites Keitaro to visit her bed-- as long as he brings food, that is.

Keitaro sees the "older" Kaolla at the story's beginning. He doesn't believe the girl's story of being able to transform until he sees her a second time. 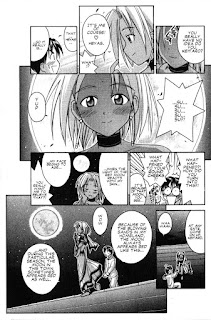 Akamatsu's image of the "red moon" probably owes something to traditional associations between femininity and the lunar cycles, though I admit that the artist doesn't dwell on the matter. Since this is a light comedy, naturally Keitaro is made ridiculous for his having contemplated even a kiss with a "too-young-to-kiss" female. Yet I think there's something serious beneath the silly humor. Unlike the male of the human species, the female radically changes her form during maturation. Nabokov's Humbert Humbert was fascinated with the image of the "Lolita," the female before the onset of maturation. But I theorize that even though the Japanese produce a great deal of "Lolicon" material, both in their mainstream entertainment and in their actual pornography, it may that they're really interested in is the magical transition between the child and the maturing woman-- which in turn, may also play into the transgressive allure of both literal and figurative forms of incest.

Theories aside, "Secret" is at the very least a more psychologically suggestive use of fantasy-tropes that one sees elsewhere in Akamatu's slapstick universe.

Posted by Gene Phillips at 5:36 PM