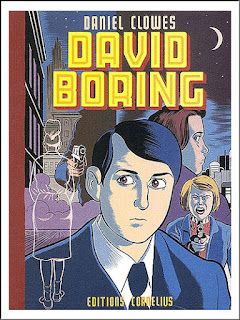 At some point in his career, Woody Allen made the public claim that he suffered from a condition he called *anhedonia,* which signified an inability to feel pleasure. Allen made indirect reference to the psychological term in the title of his 1977 film ANNIE HALL, wherein the two romantic leads are unable to reach any sort of "happily ever after" rapprochement in their relationship, and so are forced to part. Despite all of the characters' neurotic quirks, they are still recognizable as human beings with many different emotions.

Dan Clowes never references anhedonia in his incredibly overrated opus DAVID BORING, but the graphic novel is permeated with a staggering lack of affect: far more than any section of ANNIE HALL. For amusement's sake I went through each page to see how often in the GN's hundred-plus pages any of the characters smiled. If I include smiles that appeared in the comic book that protagonist Boring obsessively re-reads, I counted about seven. If I included ironic half-smiles, it might go up to ten.

I'm not faulting Clowes for failing to provide the reader with tons of sweetness and light. I'm sure he chose to downplay the normal range of affect in his characters for what he considered sound intellectual reasons. I deduce the same ironizing strategy in his giving his protagonist the name "Boring," perhaps anticipating that many comics-readers would find the GN "boring" if they read it at all. But the perpetual gloom of the story-line calls so much attention to itself that, in contrast to the no less pretentious ANNIE HALL, the work as a whole loses all claim to mimetic fidelity. Given that most of the narrative is assorted sexual encounters-- protagonist Boring is an experienced, if not especially credible, pick-up artist-- I find it counter-intuitive that nobody is seen experiencing so much as a balmy afterglow.

But it may be fairly asked, should BORING be judged as a failure of mythopoeic art, given that it focuses so much on intellectual tropes? Many of the ones in BORING don't rate as anything but leftovers from French New Wave cinema-- inexplicable doppelgangers, ambivalent doomsday-scenarios. The one exception, however, is a leitmotif involving an ironic reading of commercial comic books-- a reading that lacks any of the wit or ingenuity found in this week's ironic myth-comic.

Presumably Clowes wants us to believe Boring to be an unreliable narrator, given that he tells readers on page eight that "I'm not the least bit nostalgic and my aesthetics are up-to-date"-- yet throughout the narrative, he continually mulls over the pages of a scanty number of comic books drawn by his absentee father (a character never seen "on-panel," and who is said to die during the course of the story). The comics panels comprise the aforementioned leitmotif, in that they repeatedly interrupt the very serious main narrative with moments of childish whimsy. 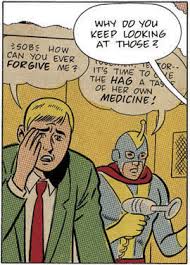 I don't know what Dan Clowes actually believes regarding the content of mainstream comic books. He may or may not be as obsessive as his character about comics, particularly DC's Superman comic books of the Silver Age (the author patently names the protagonist after Superman-artist Wayne Boring), or he may simply be exploiting their supposed lack of content to please his main audience, the bloody comic book elitists, who want to believe that there's nothing but whimsy to stupid superhero comics. However, in addition to Clowes' verdict on the topic being extremely derivative and unimaginative, this too violates any claim the character might have to mimetic fidelity. A real human being, seeking to make some imagined connection with a parent he'd never known through the medium of that parent's art, would be obsessively seeking meaning in even bad commercial-art, and in all likelihood would project meaning even if nothing could be credibly proven to "be there." In contrast, because Clowes wants to reproduce the appearance of a fetishistic obsession without giving it any emotional heft, he has to elide any imaginative response Boring might have to the comics he reads. As a further, and thoroughly artificial, elaboration of this distanciation-formula, late in the story Boring's mother tears his comics into pieces, so that all that Boring can reflect on are isolated panels, disconnected from any linking narrative. This too is no more than a play to the prejudices of readers who can't tell art from artsty-fartsy.


I may as well add that the only reason this superficial pseudo-artist has become so celebrated is that he possesses a formidable skill at staging visual scenes in comics narrative. For elitists who have been brought up to venerate Alfred Hitchcock's mastery of cinematic storytelling, Clowes offers the closest parallel within the medium of comic books. But in his chosen material Clowes resembles Hitchcock less than Woody Allen at his most insular and indulgent-- making him the perfect choice for the face of elitist comics-art.

ADDENDUM: I may as well add that Clowes' entire orientation, here and elsewhere, depends upon the process of "overthinking the overthought," as I explained here-- to the extent that his ironic renditions misrepresent even the simple narratives of commerical comics. This stands in marked contrast to my "good myth" counter-example of Kurtzman's 'Superduperman," which seeks to read beneath the surface of a particular text and then critique it-- but in an imaginative way, rather than in a manner designed to please dull-witted elitists.
Posted by Gene Phillips at 5:47 PM