In ROYSTERING IN THE CLOISTER I mentioned that I had considered investigating two of the longer recent HU threads, even though I could pretty much predict all the ultraliberal drivel that would be focused, respectively, on the James Bond franchise and on a "Batman vs. Superman" movie-trailer in which Wonder Woman appeared. I've now given both of them a once-over. The Bond thread is just the usual whining about how the evils of violence, but NB continues to be amusing with his fanboyish insistence that everyone who adapts the Wonder Woman franchise is doing a disservice to the character if they don't emulate the supposedly advanced sexual politics of the William Moulton Marston WONDER WOMAN.

The main focus of the initiating essay is that, on the basis of a four-minute trailer, NB can tell that poor old Wonder Woman just isn't getting the respect she deserves. When Wonder Woman first appears to the featured heroes in the trailer, their response upon seeing her in her superhero persona for the first time is to do the old "is she with you?" schtick. The fact that NB uses this piddling exchange as a reason to attack the project for its reactionary sexual politics has to be seen to be believed. 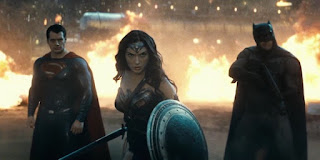 Further, even though NB has stated in at least one other essay that he doesn't care whether Hollywood ever does a Wonder Woman film, given that it won't be true to Marston, he seems to care to a ridiculous extent that Wonder Woman isn't the center of attention in a film where she's the equivalent of a guest-star.


The perspective, though, is inevitably wrong way round. Wonder Woman, the original comic, started out after all with Steve Trevor invading Paradise Island, and even in Man’s World, Diana was surrounded by sorority girls and fellow Amazons, so that Steve was always the lone dude in a female community.


Gee, could that maybe be because the name of the feature wasn't WONDER WOMAN? The idea that BATMAN VS. SUPERMAN is getting things wrong because it doesn't follow the plot-line of the story that introduces Wonder Woman is hilariously insane. But although a couple of respondents challenge NB on other matters (to which he responds with his usual "polysemy" bushwah), no one thinks it odd that he should be imposing the Marston narrative on this film-- which, going by the other essay I mentioned, he ought to consider nugatory in any event.

NB also quarrels with the film giving WW a sword because "the sword's a phallic symbol designed to hit people," as opposed to using the lasso to enforce "erotic love leadership." I sometimes wonder if NB's ideal version of the Amazon Princess isn't really the one from the old SUPER FRIENDS cartoon. That was the only time I've ever seen WW doing nothing but grabbing villains with her lasso alone. The Marston Wonder Woman didn't usually employ a sword, but she didn't need to, because most of those stories involve Diana beating the crap out of villains with her fists. It's not as easy to claim phallocentrism when a heroine uses her fists rather than a sword, but it's ludicrous to assert that the heroine restrains her foes with "love leadership" when in fact she's simply hitting people, and THEN sending them off to get lessons in "loving submission" on Brainwash Island, or whatever it was called. 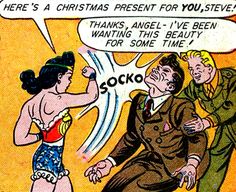 The fact that WW subdues her enemies with violence also doesn't make her much of a spokesperson for a non-violent matriarchy. But if NB thinks that it does, then that too is covered by "polysemy"-- as opposed, that is, to old-fashioned sloppy thinking.
Posted by Gene Phillips at 12:32 PM