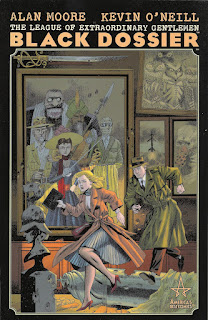 The first two volumes of the Moore/O'Neill LEAGUE OF EXTRAORDINARY GENTLEMEN are easily the most entertaining entries of this series. In contrast, many fans were put off by DOSSIER, which was not originally intended to be a part of the series proper, only a "sourcebook." However, despite what DOSSIER lacks in straightforward narrative, it does succeed in generating more mythic value from its use of characters from both "high" and "low" forms of literature.

The original LEAGUE is an ingenious crossover/ mashup of several public domain concepts and characters, most of which originated in British fiction of the Victorian period, though some figures from French literature (Verne's Captain Nemo) and American literature (Poe's Dupin) make appearances. There are some important myth-motifs in the first two adventures, but though I liked them much better than, say, Kim Newman's mashup-novel ANNO DRACULA,  there's not a single overriding theme in either volume.

BLACK DOSSIER may be fairly called over-ambitious. The story brings the series into the 20th century, as the remnants of the 19th-century League-- rejuvenated versions of Mina (DRACULA) Murray and Allan (KING SOLOMON'S MINES) Quatermain-- infiltrate the British spy-agency MI-5 in the year 1958. However, this 1958 Britain is one whose history has been compromised by Moore's interpolation of fictional scenarios. One scenario is the "Big Brother" government from Orwell's 1984, that has only recently been overthrown. Another is the development of both manned and unmanned space-flight, which allows Moore and O'Neill to work in references to a variety of British SF-adventure serials ranging from DAN DARE to various Gerry Andersen puppet-shows.

Murray and Quatermain manage to escape MI-5 with the organization's "Black Dossier" on the League's activities, after having a violent encounter with an agent named "Jimmy," clearly a satire on Ian Fleming's James Bond. 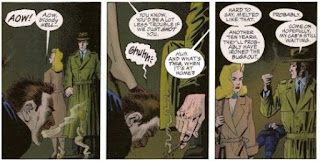 I've already commented extensively on my disagreements with Moore's estimation of the Bond character, so I won't repeat myself on that score. Still, Fleming's Bond is just the tip of the spy-berg. Much of BLACK DOSSIER is devoted to sussing out the history of British spycraft as seen through the lens of its fictional incarnations, ranging from the novels of John Buchan to the Graham Greene-scripted film THE THIRD MAN. As a reader with only a moderate interest in spy-fiction, I am intrigued but not fascinated with Moore's espionage mashups, which include an attempt to ground English espionage in a lost work by William Shakespeare, which includes in its cast Prospero of TEMPEST fame.

Also used more as a leitmotif than an outright theme is the authors' concern with a near-ecstatic love of stories. The loose implication of the narrative seems to be that while mundane spies like Bond and Harry ("Third Man") Lime are merely concerned with promulgating real-world power, Murray and Quatermain have become the defenders of the imaginal world of stories-- which is of course the matrix from which both characters were born, and which they visit near the conclusion. 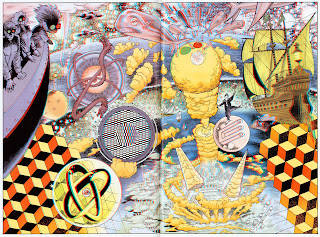 I don't imagine Moore and O'Neill worried that much about whether they'd made a sound argument distinguishing the opposition between "matter's mudyards" and the "radiant synthesis" of this multi-story mashup. They are concerned with persuading the reader through allusion to all of his favorite myths-- as long as those myths don't include James Bond--and as a lover of crossovers, I confess that they've succeeded in the affective sense. My cognitive side would argue that Moore is not enough of a poet or a philosopher to pull off this multi-referential synthesis, but I still find BLACK DOSSIER persuasive, despite all of Alan Moore's personal quirks.

Though tempted to wrap up here, I can hardly pass over the subject of the Golliwog. 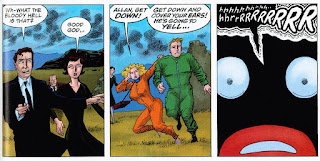 This site relates a brief history of the Golliwog's history as a literary creation, as an icon derived from minstrel show imagery, and as a racial denotation which still causes no small irritation in modern times. Of course, in the current political atmosphere it's impossible for an author to utilize any racial myth unless he uses it as an ideological condemnation of racist belief-systems. Moore does imply such a critique in DOSSIER, not least because the googly-eyed, thick-lipped Golliwog is seen defending Murray and Quatermain against three agents of the repressive British hierarchy: the caddish Bond-knockoff and his allies, Miss Night and Hugo Drummond. The former is a rather hollow imitation of Emma Peel of AVENGERS tele-fame-- Moore's talent for mimicry doesn't extend to giving Night any of Peel's characteristic wit-- and she proves irrelevant to any argument involving racial representations. However, Hugo Drummond does not. It's likely that only Moore and a handful of his readers would know that this character is transparently based on the once popular British prose-hero Hugh "Bulldog" Drummond. In contrast to the Hollywood films featuring the character, which made Drummond into a sort of handsome gentleman-adventurer like The Saint, the original British novels are masterpieces of racial invective. The original Bulldog sinks his teeth in all of the enemies of White Britain-- mostly Jews, Commies, and "wogs" of all types-- and Moore is dead-on in portraying Hugo Drummond as equally acidulous to the aliens in his midst. Shortly after the scene in which the supernatural Gollywog stuns the pursuers with a great yell, Drummond calls the Gollywog a "coon" and goes after him, only to be diverted later and turned against the Real Enemy: namely the faux-Bond and his secret American bosses.

I've purposely avoided looking about the web to see how Moore may have defended his use of the Gollywog. I've repeatedly defended even offensive racial myths on the basis of imaginative freedom, and despite Moore's defense of the importance of stories and story-telling, I'm not quite sure he's on that same page in a conscious, ideological sense. Nevertheless, he and O'Neill clearly didn't just roll out this minstrel-show icon for the purpose of insulting black people, nor for the debatable pleasure of indulging in "white privilege." Their precise motive doesn't interest me, but what I think they've achieved is akin to Jung's coincidentia oppositorum: in which two diametrically figures are brought into contact, so that those observing them can better suss out their natures. At the very least, the ideological critics might have made something of the fact that the real-life racist "hero" was the tool of evil, while the cartoonish racial caricature was indubitably a supporter of liberation. However, it's no surprise to me that nearly no one could read BLACK DOSSIER as anything but Moore failing to fall into line with the lofty precepts of political correctness-- which in the 21st century have in effect become The New Face of Big Brother.

Posted by Gene Phillips at 5:10 PM