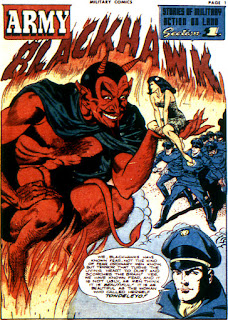 In Steranko's HISTORY OF COMICS, the author records a statement from Golden Age comics-writer Bill Woolfolk, in which Woolfolk admits having ripped off the story of the 1942 film WHITE CARGO (reviewed here) for the story "Tondeleyo." If Steranko correctly quoted the former comics-writer-- and Steranko's quotes are problematic, since he didn't cite sources-- then Woolfolk didn't really remember the story he'd written, since the only thing the Blackhawk-tale takes from the movie is the name and alluring appearance of the title character.

The 1942 movie is an entirely naturalistic story of a white trader who "goes native" in Africa when he succumbs to a dark vixen's charms. The Tondeleyo of comics is also a temptress, but it's implied-- without any outright verification-- that she may the incarnation of some metaphysical evil. Since her nature and even her final fate remain ambiguous, the adventure falls into the sphere of the uncanny, as determined by the trope I term "phantasmal figurations," similar to the films reviewed here.

For one thing, even though the splash suggests an alliance between the sarong-clad woman and the Master of Evil, Tondeleyo plays no favorites in the game between the Allies and the Axis. The first page depicts the unexplained suicide of a famed German flyer, Oberst, and the only clue left behind is a white rose, identical to one Tondeleyo wears in her hair.

As for Blackhawk, he's first seen issuing a challenge to a whole German compound, tossing around Nazis as he invites them to come for a dogfight above Blackhawk Island. The hero gets away with ridiculous ease, while the Nazis plot to attack in force, rather than in an honorable equal combat.

When Blackhawk gets back to his refuge, though, he finds a surprise: a sarong-clad young woman, Tondeleyo, has showed up on the island. Her beauty has such an effect on Blackhawk and his subordinates (except, as will be seen later, the comic-relief Chop-Chop) that they agree to let her intrude upon their all-male ranks. The heroes aren't portrayed as eager to prey on a beautiful woman, for they barely if at all make any passes at the mystery girl. Possibly the writer meant to imply that their initial motive is chivalry to a helpless woman. Then the news comes that their aerial challenge will be met. The pilots are all glad to meet the foe, but Tondeleyo suddenly begins to exert her insidious will upon the oldest member of the Blackhawks, Hendrickson. While the others go out to meet the foe, Hendrickson loses the will to fight, makes a lame excuse, and remains behind. 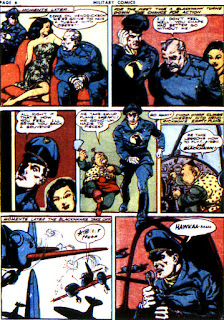 An air battle ensues, complete with some comedic action from the Chinese mascot. The victorious heroes return to their HQ, and Blackhawk arrives just in time to keep Hendrickson from killing himself-- the same way Oberst did, out of fear that he'd turned into a coward.

Blackhawk then interacts with Tondeleyo, who turns on her full charms. He almost kisses her-- which is the closest the story comes to anything overtly sexual-- but is interrupted. In the "days that follow," Tondeleyo slowly saps the fighting-spirit of all the pilots. In WHITE CARGO, it's clear that the victim of the vixen's charms has been physically seduced by her, but this story portrays more a seduction of the spirit, since it seems unlikely that this Tondeleyo has actually slept with any of the Blackhawks. Chop-Chop seems immune, but it's not clear whether or not she troubled to turn her charms his way. 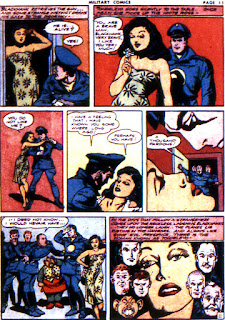 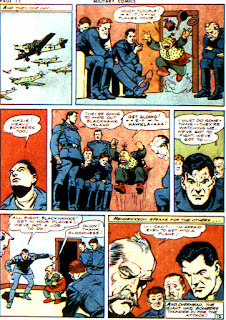 Finally, when another German air-attack approaches, only Blackhawk is able to summon the gumption to get into a plane and meet the enemy. His plane crashes into one of the German crafts, and the other heroes, enraged by his apparent death, are mobilized to charge into their planes and handily defeat the enemy.

Blackhawk, however, has not died-- though the story doesn't trouble to explain just how he survived a mid-air crash. He's evidently sussed out, on some dim psychological level, that Tondeleyo is the seed of his men's ennervation, even though there's no attempt to portray her as a literal spirit, demon, etc. In a last act of quasi-chivalry, Blackhawk prevents Chop-Chop from killing the native girl. However, as she flees male wrath, she's apparently killed by one of the crashing German planes, very indirectly avenging her murder of Oberst. The story ends with Blackhawk musing, "She was evil-- who can say when evil really dies?" Earlier Blackhawk intuits some deeper aspect of her nature-- as witness his unusual idea that he's met her somewhere before-- so he's apparently realized that she was either a spirit or a mortal possessed by such a spirit. In any case Woolfolk's story gains considerable symbolic amplitude by refusing to put a name to her nature, and thus transcends the narrow racism of WHITE CARGO. 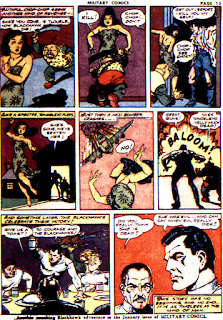 The entire story, with all of the meticulous Reed Crandall art, can be read here.
Posted by Gene Phillips at 3:21 PM