In essays like this one, I've argued that during the fifteen-year partnership of Joe Simon and Jack Kirby, Simon may have functioned as a "quality control" for Kirby's sometimes undisciplined creativity. If so, then Sinon's business relationship with Kirby may have operated much in the same way as Stan Lee's editorial authority over Kirby during the latter's first Marvel tenure. This hypothesis provides at least a tenable explanation as to certain changes in the quality of Kirby's work once he did all the writing and editing of his features in the 1970s and (mostly) from then on.

I've quoted Simon as stating that he usually assumed writing duties during his collaborations with Kirby; that he often wrote out scripts or, being an artist himself, provided Kirby or other artists under his aegis with roughs or thumbnails. This arrangement wouldn't keep Kirby from making verbal suggestions about stories, just as he did with Lee. Some of Kirby's claims to have "done it all" elicited many fans-- and even professionals like Alan Moore-- to credit Kirby's claims by asking how much work of consequence Lee produced without his two most creative collaborators, Kirby and Steve Ditko.

I've already given my answer to that question elsewhere, but it seems fair to ask the same question about Joe Simon's creativity apart from Kirby. However, he linked up with Kirby so early in his career that Simon doesn't have a lot of non-Kirby work on his resume. Like Lee, his professional career in mainstream comics came to an end by the early 1970s, and the most notable items on that resume are a few short-lived features for DC Comics, the editorship of SICK MAGAZINE from 1960 to 1968, and a much briefer editorial post for Harvey Comics' "Harvey Thriller" line from 1965 to 1967.

Technically, the first titles from the "Thriller" line were largely reprints of older material, and even when the line began issuing assorted superheroes in late 1966, editor Simon included large quantities of anthology-style stories as backups to the super-doers. Simon had worked on many superheroes during the Golden Age, not least his co-creation Captain America, and had worked with Kirby on sporadic genre-revivals in the 1950s, such as FIGHTING AMERICAN and Archie's FLY and SHIELD properties. Given that the genre enjoyed an upsurge in the early 1960s, one might have thought that if Simon cared much for the genre apart from channeling Kirby's greater enthusiasm for it, then that creative interest would have showed up in the Harvey Thriller line. Indeed, some fans have speculated that the only reason Harvey Comics started the "Thriller" line was to be in a position to take advantage if the BATMAN teleseries became popular when it debuted in early 1966.

If this was Harvey's game-plan, they took their sweet time about reacting to the show's immediate success, since the "Harvey Heroes" didn't start appearing until late 1966-- and when they did, costumed cut-ups like Jigsaw, Pirana, Spyman and the Bee shared a lot of space in their titles with assorted works that looked like whatever old pros like Wally Wood and Al Williamson happened to have stuck in their rejection drawers. Worse, what makes the Harvey Heroes "null-myths" was that though Simon aped Stan Lee's "heroes with problems" schtick at times, it seemed clear that Simon couldn't invest enough conviction in the costumed characters to make them attractive to the juvenile readers of the era.

One immediate indicator of Simon's disaffection was that most of his "Harvey Heroes" couldn't even come up with decent names. Spyman and Pirana (apparently that was how Simon thought it should be spelled) were just passable, but it's hard to imagine a kid fantasizing about sporting a name like JIgsaw or the Glowing Gladiator. The Bee was particularly schizophrenic name-wise. In his two stories, he was called "the Bee." But on both of the exterior covers, he was called "Bee-Man"-- a transparent ploy to have a logo resembling that of a certain chiropteran hero. And then there's-- "Jack Quick Frost." 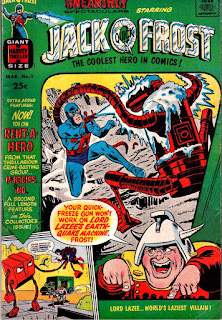 At least, that's what he's called most of the time, without much explanation-- except that a few times someone uses the name "Jack Be Quick Frost," which must be one of the most cumbersome puns of all time. Frost starts out as government agent James Flynn, who gets flash-frozen into an iceberg-- a swipe from what Marvel had done with the reborn Captain America?-- and so gains super-freezing powers. A stronger influence on the hero is probably the "Mister Freeze" character from the BATMAN teleseries. The TV character, derived from a one-shot villain from the Batman comics, had debuted in Batman's first half-season, and Jack Quick Frost swipes Mister Freeze's vulnerability-gimmick: that of being in danger if he doesn't have access to deep-freeze temperatures. 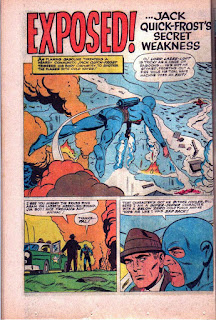 Technically Simon may not have drawn or written any of these features. Still, I tend to think he would have followed the same habits he'd built up: sketching out what he wanted for raconteurs like Otto Binder and Jack Sparling (credited on GCD for the first of Jack's two adventures). Binder had written dozens of comics stories by the time of the "Thriller" line, and I think it's unlikely that he would have floated cutesy name-puns like "Jack Be Quick Frost," which sound like something Simon might've cobbled together for FIGHTING AMERICAN or SICK. Yet, as the above section shows, though Simon probably tried to work in BATMAN-references, the writer has clearly been told to emulate Stan Lee's style. "Biting icicles," indeed.

There are other bits of carelessness even in just two issues: the character is seen using a freeze-gun on the cover of his first appearance (again, like Mister Freeze), even though in the stories proper he always projects cold-rays from his fingers. But the thing that makes me choose Jack Quick Frost as a "null-myth" is the fact that Simon couldn't even keep his own psuedoscience straight. In his last appearance, fighting his sole enemy "Lord Lazee," Frost is exposed to dry ice. 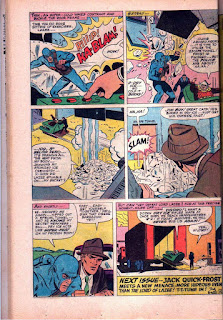 But the whole point of dry ice is that it has a refrigerating effect on whatever it touches. It may feel like it burns when touching a normal person's flesh, but it shouldn't have any deleterious effect on a superhero who likes things cold.

And with this ignominious comedown, "the coolest hero in comics"  came to a much deserved end. Apparently Simon kept the rights to a lot of these characters, but there's no indication that he owned this one-- whose real name probably ought to have been "Jack Quick Buck."

Posted by Gene Phillips at 4:18 PM